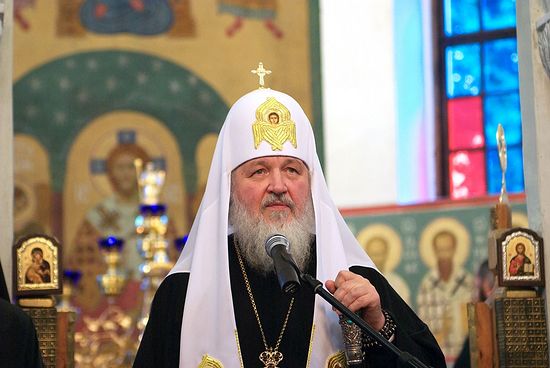 Patriarch Kirill of Moscow and All Russia called terrorism a new form of obsession and called for it to be fought not only militarily, but also through education and culture.

"The world is now faced with a different obsession, a different madness, which we call terrorism," the patriarch said after a liturgy in the Cathedral of Christ the Savior in Kaliningrad on Sunday.

He said the tragedy that has occurred in Paris indicates "people's obsession to achieve political goals using any methods, even by destroying innocent people."

"The fight against terrorism should not only be military. Not only the special services, but also ordinary people should overcome this horrible misfortune of this age through education, culture and maybe most importantly through prayer and through increasing the level of one's faith," the patriarch said.

The patriarch said one thing is connected to the other and "the removal of God from our world, the destruction of holy places and ideals, the obsession by dark spirits - all these things are links in one horrible chain."

"The fight against terrorism is not only the task of the state, law enforcement officials, Armed Forces, it's also a task of each one of us. We should learn to live in the freedom that God gave us so that no obsession, including obsession determined by political ideas and ideologies, can deprive us of God's image and cause us to commit horrible crimes," he said.

"Today's terrorism is a diagnosis, and not to specific peoples and countries, it's a diagnosis to the entire human civilization. Why is all this happening? The Church has only one answer: look inside your hears, repent again and turn to God. Let our universal prayer in different languages, by different means and even through different religious traditions to God, the Creator, entraet Him to have mercy on the human race and rescue us from the horrible captivity of obsession," the patriarch said.

The patriarch also wished the people of Russia, "who have gone through such horrible eras of obsession," to grow in faith, become stronger spiritually, and those physical opportunities "that the nature of our Fatherland gave us at God's will and that we can use to make our country rich and prosperous not only spiritually, but also physically."

Messages of Condolences and Solidarity with the French People
Church and Governmental leaders from throughout the world have sent messages of condolences to the French president and people.