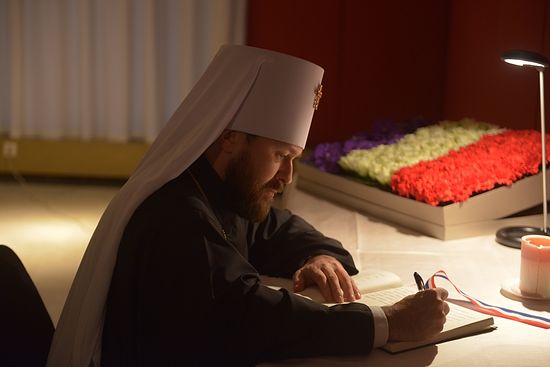 On November 17, 2015, Metropolitan Hilarion of Volokolamsk, head of the Moscow Patriarchate’s department for external church relations (DECR), visited the Embassy of the Republic of France in the Russian Federation.

At the entrance, His Eminence was welcomed by Mr. Nicolas de Lacoste, first counsellor of the embassy.

Metropolitan Hilarion wrote the following entry in the Book of Condolence for the victims of the terror attacks in Paris:

‘On behalf of His Holiness Patriarch Kirill of Moscow and All Russia, on my own behalf and on behalf of the millions-strong multi-ethnic flock of the Russian Orthodox Church, I extend profound, heartfelt and sincere condolences to all the people of France, all those who have lost their relatives and friends in the terror attacks which have taken away the lives of innocent people.

‘The terrorists are servants of Satan, thought they use religious slogans to cover up their monstrous crimes. There is no and nor there can be any justification of terrorism. We must all unite against terrorism. Russia and France were allies during the last great war and defeated the Brown Plague together. Now we must together oppose the plague of international terrorism for the sake of the future of our nations. May God help us in this!

Eternal memory be to all the innocent victims. And may the Lord give consolation to all those who have lost their loved ones and a speedy recovery to the wounded’.

In a brief talk with the French Ambassador Jean-Maurice Ripert, Metropolitan Hilarion expressed deep condolences on behalf of His Holiness Patriarch Kirill of Moscow and All Russia and on his own behalf.

Then the DECR chairman laid flowers at the embassy in memory of the victims of the tragedy that took place in the evening of November 13, 2015, in Paris. 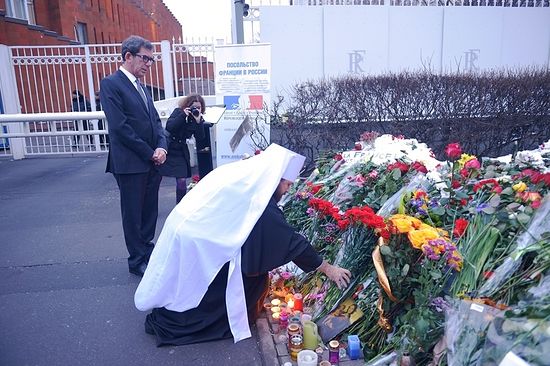 Council of Bishops of the Ukrainian Orthodox Church of the USA: Our Prayers are with the People of France

Council of Bishops of the Ukrainian Orthodox Church of the USA: Our Prayers are with the People of France
As we now pause to remember the lost lives of so many innocent victims, let us also remember the great acts of self-sacrifice, heroism, and compassion that will never be forgotten, as so many offered their lives for the safety and well being of others. Flags In Serbia At Half-Staff Three Days
Serbia is lowering flags to half-staff for the following three days in solidarity with France and its citizens following a series of terrorist attacks that left 128 dead and around 200 injured, Serbian Prime Minister Aleksandar Vucic stated on Saturday.

Messages of Condolences and Solidarity with the French People
Church and Governmental leaders from throughout the world have sent messages of condolences to the French president and people.
Comments
×