On Names and Angels. The Day of Archangel Michael

“There is no one like God”—in this is expressed all of the great Archangel’s knowledge of his God. He doesn’t describe Him, nor does he explain—he stands and witnesses. In this is his inclusion in the radiance of the Divinity, and in this is the measure by which he manifests this radiance and opens for us the way to the Lord’s mystery by his word, and by those names that express all his unfathomable experience of the unfathomable God. 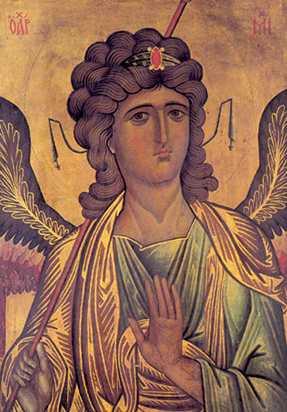 Archangel Michael
There is a place in the book of Revelations where the seer of mysteries, St. John, tells us that when the time comes and we will all be in the Kingdom of God, then each will receive a mystical name by which only God Who gives it knows and recognizes the one who receives it. This name as if contains in itself the whole mystery of the person; by this name is everything said about him; no one can know this name other than God and the one who receives it, because it determines the unique, inimitable relationship that exists between God and His creature—each and every one, and for Him one and only.

We bear the name of the saints who lived out their calling on the earth; we have been consecrated to them, like churches are consecrated to one or another saint, and we must contemplate both the meaning of the name and the personality of the saint as far as we can ascertain it from his or her life. After all, he or she is not only our intercessor in prayer and protector, but to some extent also the image of what we could be. No one’s life can be duplicated, but it is possible to learn from the life of one or another person, saint, or even sinner how to live more worthy of ourselves and of God.

Thus, today we celebrate and honor the memory of Archangel Michael and all the angels of the Lord. Angels are messengers; an Angel is one whom the Lord can send on a task and who will fulfill it completely and perfectly. It may seem strange that a whole group of the Lord’s creatures are called by names that indicate their duties and service, as if there were nothing else in them. And in fact, that is how it is, and in this lies their sanctity: purified, and shining with divine light. According to the words of St. Gregory Palamas and our divine service books, they are the secondary lights, the reflections of eternal divine light. They do not have that lack of clarity, that obscurity that allows us to be called by name—the name that determines of our place before the face of God and our place in the Lord’s creation. They are secondary lights. What does this mean?

This means that a certain divine light pours through them in an unhindered, free, and broad river; but not simply as though along an empty chute, not as through a lifeless glass, but as a light that pours, sparkles, shines, and multiplies when it falls on a precious stone, reaches its heart, and from there in responsive radiance shoots out all sides, illuminating and even blinding with its beauty.

This is an image of authentic holiness, and in this respect they are truly angels, because we recognize and experience them only as the luminescence of divine light, a luminescence that is not diminished or darkened, but multiplied and joy-creating, bringing life. But the essence of their existence and of their holiness remains a mystery between them and God, Who knows the depths of His creatures…

But their personal holiness is shown to us especially by the separate names that each of them is named. Certain of these names have entered into Holy Scriptures, where they are revealed to the Church by experience, and show us what their particular sanctity is. The Chief Commander of the Heavenly Powers, to whom many of us are consecrated here and in Russia, is called Michael. “Michael” comes from a Hebrew word meaning “There is no one like God”; and this word expresses the whole state of the great Archangel when Lucifer rebelled against God, desiring to establish himself in a certain, albeit created, individualism and independence, and when the great Archangel Michael pronounced this one word, which meant everything to him: “There is no one like God.” This established his relationship with God, and made him the guardian of the gates of paradise. “There is no one like God”—in this is expressed all the great Archangel’s knowledge of God. He doesn’t describe Him, nor does he explain—he stands and witnesses. In this is his inclusion in the radiance of the Divinity, and in this is the measure by which he manifests this radiance and opens for us the way to the Lord’s mystery by his word, and by those names that express all his unfathomable experience of the unfathomable God.

On the icons Archangel Michael is depicted in armor, with a fiery sword in his hand. He tramples the dragon, which signifies evil; the Archangel stands in the gates of paradise, not allowing those who are not ready to enter this holy and sacred place. He is also depicted on the doors of the iconostasis through which the clergy enters the altar—the priest with the Gospels, at the Great Entrance, or the deacon at the ectenia. These are the doors through which no one enters the Holy of Holies—the altar—but for liturgical practice.

The other Archangel, Gabriel, whose name means “Power of God”, is depicted on the doors through which the deacon returns into the altar during services. Gabriel is the angel who announces to us that the door is open, that we may again enter the presence of God; that God’s power is made manifest, that God conquered and we are saved. From the Gospel of Luke we know that the Archangel Gabriel brought Zachariah tidings of the birth of John the Baptist, and he is the one who announced to the Virgin Mary that she has found grace with God and will give birth to the Savior of the world. Therefore we see him on the icons with an olive branch in his hands—the sign of God’s peace with the world.

We read about the Archangel Raphael in the book of Tobit, how he accompanied his son Tobias and healed Tobit and his daughter-in-law, and that his name means, “God has healed.” The Holy Scriptures tell us about other Archangels and angels, and the faith of the Church, and Christian experience tell us of our guardian angels.

We call the commemoration day of the saint whose name we bear our “Angel day”, and in a certain sense, in the sense of our consecration to the saint, this is right. But just as with all the people we know, we have different relationships with different saints: Some are closer to us through prayer and through their Lives, and we wish to emulate them, while we admire others as if “from a distance”. Our relationship with our guardian angel is completely different: We have been entrusted to him, and he is our Guardian, regardless of whether we turn to him, or even remember him—like our mother or father with whom we have an unbreakable connection, no matter what we think of them, how we treat them, or how we behave ourselves…

Furthermore, one person on the earth was called the herald and angel of the faith, and that is St. John the Baptist. We read about him things similar to what I have just said of the angels. It says at the beginning of the Gospel of Mark that he is a “voice crying in the wilderness…” He is a voice, he is the sound of the Lord’s voice, he is an angel, because through him the Lord Himself speaks; he says of himself that he must decrease so that the image of the Lord would stand before the people in full measure.

This is our path on earth; we must decrease, gradually lose what seems so precious but what is in fact only the coagulation of our visible nature. We must gradually become translucent, in order to become as if invisible—as a precious stone is invisible and is discoverable only by the light that strikes it and shines upon everything around it. Then we as if lose something of our temporal essence, but only in order to acquire the knowledge of God that cannot be taken away: the only thing that each of us who calls himself “I” can possess and manifest to all others—because each of us comes to know God in a unique and inimitable way. Our path goes from earth to Heaven, from our dense incarnation to enlightenment and translucence… Angels on earth are the unlying witnesses, St. John the Baptist, is on the path, and He Whom the Holy Scriptures call the “Angel of Great Counsel”, God, has come in the flesh.

These are the images, the thoughts, and the contemplations of our reverence for angels, our love for them, our communication with them in prayer, and their intercession for us, which can help us find the path of our own souls from earth to heaven; from our own obscurity to perfect enlightenment. Through the prayers of the angels and archangels, may the Lord grant us, after we have renounced ourselves and our own will, to begin to decrease to where God might fully shine in in each of us. Amen.

From Metropolitan Anthony of Surouzh, In the name of the Father, and the Son, and the Holy Spirit. Sermons (Christian Life: 2010) [Russian].