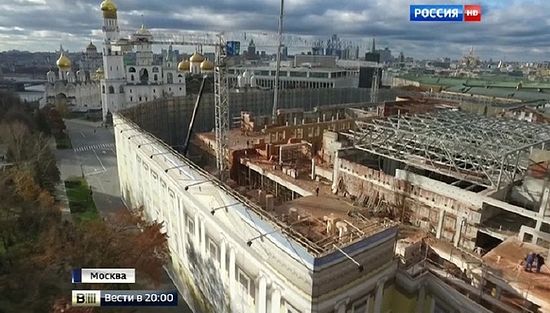 The long awaited demolition of the Kremlin Presidium or "Building 14" began this week. The building was constructed in the 1930s, and up until 2011 the Soviet era building formerly housed the offices of the Presidium of the Supreme Soviet, the highest legislative body of the Soviet Union.

The Presidium stands on the site of the destroyed Chudov and Voznesensky monasteries and the Lesser Nicholas Palace. The two monasteres were among the historic buildings within the grounds of the Kremlin ordered to be destroyed by Joseph Stalin as part of the state atheism campaign, which resulted razing of religious structures from all over Russia.

Once the demolition is complete, a team of archaeologists will conduct excavations of the lost architectural sites will begin in April 2016. Any items discovered will be transferred to the funds of the Moscow Kremlin.

In August 2014, Russian President Vladimir Putin made a bold announcement, in which he suggested rebuilding both the Chudov Monastery and Voznesensky (Ascension) Convent. The decision to re-establish the historic square and the restoration of the destroyed monasteries has been referred to UNESCO for further discussion.

The historic watercolor shows (from left to right): the Chudov Monastery, the Small Nicholas Palace, and the Ascension Convent, which were demolished in 1929, to make way for the Soviet era building which would house the offices of the Presidium of the Supreme Soviet until 2011.