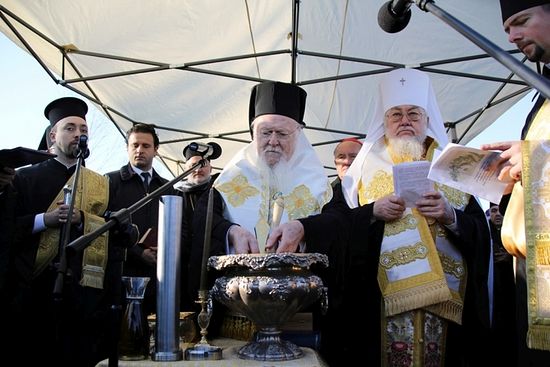 December 5, 2015 will remain a memorable day in the history of the Polish Orthodox Church. His Holiness Bartholomew, Ecumenical Patriarch of Constantinople, presided over the blessing of the foundation stone of the new Orthodox Cathedral of Agia Sophia, located in the Ursynów district of Warsaw.

In his speech, His Holiness Patriarch Bartholomew several times underlined the importance of this event, and namely that of the blessing of the new Cathedral in the capital city of Poland, within the Orthodox Diocese of Warsaw and Bielska. On this occasion, His Holiness referred to the prototype of the new cathedral situated in Turkey, saying that “Agia Sophia is not a museum, nor a mosque, but she has always been and still is an Orthodox Cathedral, in the walls of which angels silently weep and carry forth prayers to God.”

His Beatitude Sava, Metropolitan of Warsaw and All Poland, said that a great event is being marked with the construction of a new church in Warsaw, which coincides with some other important anniversaries: the 25th anniversary of Poland’s state independence, and the 90th anniversary of autocephaly of the Polish Orthodox Church.

People nowadays are experienced but also divided; they need miracles and extraordinary events such as this one today.” His Beatitude Sava added that “an Orthodox Cathedral as a whole is similar to a closed book. After the consecration, each brick, every part of the cathedral becomes a hymn, a liturgy, and receives a majestic holiness. This is what the consecration means. This mystery separates it from worldly places, it cleanses it by the invocation of the Holy Spirit Who transforms any space into a place of theophany, a Holy Mount, situated in the centre of the cosmos, a Jacob's ladder.

“At the foundation of the Cathedral have been laid relics of holy martyrs: the Holy Infants of Bethlehem, who were killed by Herod’s command, and the Holy Child Martyr Gabriel Zabłudowski.” (The six-year-old Holy Martyr Gabriel Zabłudowski, was kidnapped from his parents and killed by a Jew in 1690, in the Polish town of Białystok. He is considered a protector of children).

The new cathedral Agia Sophia represents a prayerful gratitude brought to our Orthodox predecessors, who offered their lives on the altar of serving God and the homeland. This is the land upon which Holy Trinity Church was situated, a land sprinkled with the blood of the Warsaw insurgents, who in the year 1944 sheltered in this church, as well as the land on 138 Wolskiej Str., where the Nazi Germans killed children and their teachers in an Orthodox Orphanage. Agia Sophia Cathedral will be a monument in honor of the Orthodox refugees of 1915, martyrs of Chełmska and Podlasie lands, and the victims of Vistula (Wisła) Action rom Furmanów village, and in honor of those who suffered and gave their lives for Orthodoxy,

Numerous Polish Orthodox bishops took part in the ceremony of blessing and laying the foundation stone of the Agia Sophia Cathedral in Warsaw: Archbishop Szymon, Archbishop Abel, Archbishop Jakub, Bishop Jerzy, Bishop Paisjusz, as well as Metropolitan Emmanuel of France and Metropolitan Elpidophoros of Brusa (members of the Ecumenical Patriarchate delegation). Among those in attendance were also representatives of other Christian Churches; the Roman Catholic church was represented by Cardinal Kazimierz Nycz. Representatives of the Presidential Chancellery, the Office of the Prime minister, and local authorities were also present.

His Beatitude Metropolitan Sava addressed special thanks to the developer of the project, architect Andrzej Markowski, as well as to the Committee for the Construction of the Cathedral, lead by Rev. Fr. Adam Siemieniuk and Deacon Marek Łopatiuk, who have supported the effort of edifying Agia Sophia Cathedral in Warsaw.

Full of hope His Beatitude said: “We are at the beginning of the road. We are beginning a great work and we pray to the Almighty God that His blessing may accompany us until the completion of this work.” Saint Onouphrios Monastery of Jableczna, Poland
St. Onouphrios Monastery in Jab&#322;eczna was built in the 15th century and is dedicated to the Egyptian hermit living in the 4th century. It has been the only Orthodox monastery in the area of the diocese. It played a significant role during the time of the Union of Brest, being an important centre of the Orthodox faith.
Comments
×