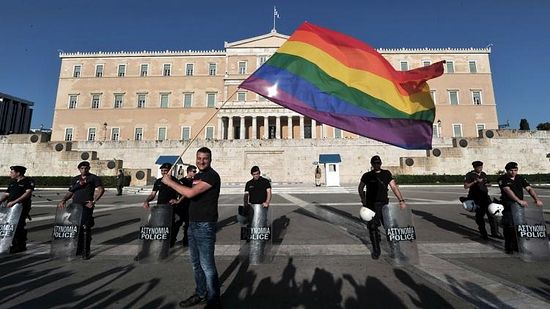 A participant of the Gay Pride event waves a rainbow flag near police protecting the Greek parliament on June 9, 2012.

Greece parliament will vote later this month on granting same-sex couples the right to a civil union, despite strong opposition from the influential Greek Orthodox church.

The Greek government was condemned for anti-gay discrimination by the European Court of Human Rights in 2013, and the vote is an attempt to fulfill its human rights obligations.

Lawmakers will consider re-drafting an earlier law from 2008, which explicitly excluded same-sex couples from civil unions.

The governing coalition in Greece made up of the left-wing Syriza party and the nationalist Independent Greeks (ANEL) party presently holds majority in Greece's 300-seat parliament.

However, ANEL has made it clear that it will vote against the motion to extend gay couples the right to civil unions.

Greek Prime Minister Alexis Tsipras hopes to garner support from the socialist and centrist parties in order to counter ANEL's opposition in order to see the bill passed through for consideration in parliament.

Greece is one of the last European countries where same-sex couples cannot receive some sort of official recognition for their relationship.

The country's first two same-sex civil marriages were held in 2008, but were only a year later after pressure from the Greek Orthodox Church, which officially frowns upon same-sex relations.