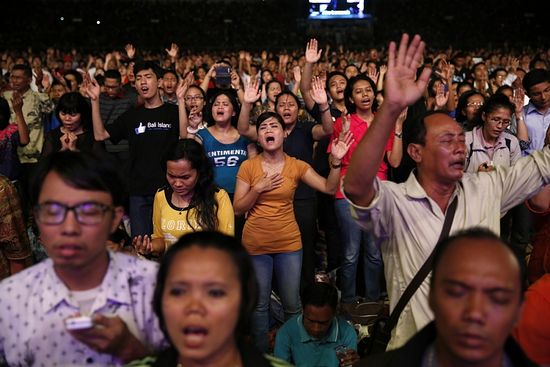 The government of Indonesia has said it will deploy close to 1,500 officers to guard Christian churches this coming Christmas season, reportedly fearful of possible ISIS attacks.

Today Online reported that the officers have been dispatched across Indonesia's North Sumatra province, with a mission to protect churches during Christmas and New Year celebrations.

William Stark, International Christian Concern's Regional Manager for South Asia, told The Christian Post on Wednesday that based on the information from the group's contact in Indonesia, there does indeed appear to be an effort being made to protect churches during the Christmas season.

He said that part of the reason for increased security could be fears that the Islamic State terror group could target Christian places of worship, which which would be problematic for several reasons.

"Most prominent among those reasons is that Indonesia does not want any sort of ISIS activities/attacks taking place within their borders. The government has recognized that ISIS has attracted and likely radicalized some of its citizens," Stark told CP.

"Like Bangladesh, the government will likely go out of its way to prevent and/or deny any ISIS activities in its borders. So the protection of the churches may be more about preventing ISIS than protecting Christians," he said.

Other groups speaking out against Christian persecution include the World Evangelical Alliance, which also confirmed with CP that the Indonesian government is taking the step of sending thousands of police officers to protect churches.

"As a matter of fact, the government will deploy more police officers especially on Christmas Eve and on the night of Dec. 31. I verified this from the Evangelical Alliance in Indonesia," said Godfrey Yogarajah, the Executive Director of WEA's Religious Liberty Commission, to CP.

IS, which has been looking to spread its influence beyond Iraq and Syria, has reportedly enjoyed rising support in Indonesia, which has the largest Muslim population in the world.

Think tanks such as the Gatestone Institute have said in reports that violent jihad and Islamic extremism against Christians are on the rise, with several violent outbursts reported throughout October in Indonesia.

Islamic leaders have been tearing down churches, warning that Christians are "Allah's enemies," while local authorities have failed to bring the attackers to justice, Gatestone said.

The Gatestone Institute also pointed out that registration permits are near impossible to obtain due to the 2006 Joint Decree on Houses of Worship, which requires places of worship to obtain signatures from at least 60 local households of different faiths.

Open Doors, a ministry that annually ranks countries based on the severity of persecution Christians face, placed the nation in 47th place in its 2015 list, noting that Christians are targeted both from radical Islamic groups, and in government church closings.

Stark said, however, that he does not believe the deployment of police officers shows an increased concern or improved relations with the Christian population.

"The closure of churches remains a huge problem for Christians in Indonesia, as does social discrimination and impunity for individuals who attack Christians and their places of worship. It is estimated that 1,000 churches remain closed in Indonesia despite 80% of them fulfilling all the legal requirements for them to legally exist," he said, noting that two large churches, the HKBP Philadelphia Church and BKI Church, will be holding their Christmas services in front of the presidential palace, because their buildings remain shut down.

"Taken into this context, I think that the protection of the churches by the police in Indonesia is more about preventing ISIS activity than protecting Christians," ICC's Regional Manager for South Asia concluded.

Christian churches have suffered from bombings in the past, including an attack across the country on Christmas Eve in 2000, which left 18 people dead.

The Religious Affairs Ministry noted that the North Sumatra province has a fairly large minority Christian population of around 30 percent. Back in 2008 the province had almost 5,400 Protestant and nearly 1,700 Catholic churches, home to a a total number of 2.6 million and 450,000 worshipers, respectively. How Indonesia’s “Religious Harmony” Law Has Closed 1,000 Churches
Even churches with proper documentation are being denied building permits. Why? Christian Churches Demolished in Indonesia to Appease Mob of Enraged Muslims
Authorities in the Aceh province of Indonesia began tearing down a number of Christian churches on Monday at the demand of hardline Muslims, as religious tensions have risen in the province in recent weeks. Christian Community in Indonesia Asking For Prayers After Muslim Extremists Torch Churches, Leaving One Dead
The Christian community in Indonesia's Aceh province is asking for prayers after a group of Muslim extremists torched three church buildings on Tuesday, killing one person in the process. The criminal acts reportedly followed a social media message spread by Muslim extremists on Friday urging others to take action against Christian churches in the region.
Comments

Bhagavan Nath12/17/2015 10:39 pm
All this is very sad reading. surely it must be apparent that Christians and Muslims have more in common than what separates them - both are resisting our modern world's consumerism and materialism - they are natural allies!
×