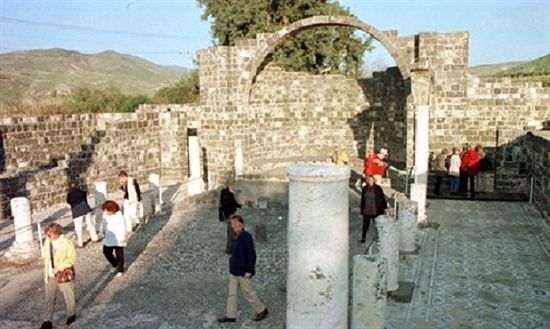 Visitors to Kursi National Park in Israel in this undated photo.

Israeli archaeologists have found Hebrew inscriptions on a 1,500-year-old slab of marble on the shores of Lake Kinneret, near the ancient village of Kursi where Jesus Christ is believed to have performed the "Miracle of the Swine."

"This is the first indication that there was a Jewish presence, and it reinforces the belief that the town of Kursi was where Jesus performed the 'Miracle of the Swine,'" the team of researchers working at the site said, according to The Jerusalem Post.

Historians have long believed that Kursi was inhabited either by Jews or early Christians, and the discovery, supervised by Prof. Michal Artzi of Haifa University and Dr. Haim Cohen with the Israel Antiquities Authority and the Israel Nature and Parks Authority, seems to confirm those ideas.

Lake Kinneret, also known as the Sea of Galilee, is an important source of drinking water in Israel, and has been the site of much archaeological research.

Prof. Artzi explained that the inscription on the marble "consists of eight lines, and you usually don't find so many words in Hebrew letters carved in stone."

"The assumption is that whomever the inscription was dedicated to had enormous influence on the local people. There is no other dedication as detailed and previous among the archaeological discoveries made in Israel up to now," he added, according to JP Updates.

Kursi is believed to be the location where Jesus once drove out demons from two possessed men, and sent them into a herd of pigs, as described in Matthew 8:28-34.

Earlier in December, another significant archaeological discovery was made in Israel near Jerusalem's Old City, when researches said they had found a 2,700-year-old piece of clay with the seal of the ancient biblical figure Hezekiah, one of the kings of Judah.

Eilat Mazar, the excavation leader, said that the artifact, believed to have been thrown out with other garbage at an ancient dump outside Jerusalem, is "the closest as ever that we can get to something that was most likely held by King Hezekiah himself."

The artifact, which was used to seal a papyrus scroll, left an impression of the fibers that was preserved on the inverse.

Hezekiah, believed to have ruled the kingdom of Judah between 715 and 686 BCE, is mentioned in the Bible in the book of 2 Kings 18:5, which states that he "trusted in the LORD, the God of Israel." Site of Jesus’s Trial May Have Been Uncovered in Jerusalem
Archaeologists have announced they may have uncovered the precise location of Jesus’s trial, and it’s not along the traditional Via Dolorosa path.
Comments
×