Two new Orthodox churches to open in the Arctic in 2016 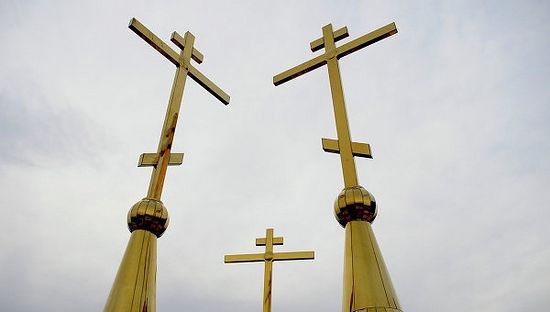 “The military churches in Mys Otto Shmidta and Wrangel Island will begin to receive the faithful by the end of 2016. The churches were assembled in the Ryazan region with funds provided by the Omofor Charitable Foundation for Support to Military Veterans and Invalids. The “mobile” churches have been delivered to the deployment site of military units of the Eastern Military District in the Arctic. The churches are currently being equipped with church furniture,” the message reads.

At the present time there are two wooden chapels in Mys Shmidta and Wrangel Island. They are built not far from military towns. The chapels are installed on piles and are 6 meters (c. 19.68 feet) high.

It has also been reported that churches for believing servicemen are actively being built in the District. Last year a church for the Russian Troops of Radiological, Chemical and Biological Defense in the Primorsky (“Maritime”) administrative territory was built on private donations of sponsors. Churches and chapels are also being built within the military units stationed in Transbaikalia (Transbaikal administrative territory) and on Sakhalin. Military “mobile” churches for the Arctic to be consecrated in Kaliningrad
The construction of the mobile churches was funded by the Omofor Kaliningrad regional charity fund for support to Security and Protection of law veterans and invalids. The fund received this request from the administration of the Railroad troops of the armed forces, reports the Baltic Fleet’s press service.
Comments

Mark Seidenberg4/1/2016 6:08 am
Does any of the reader of this article know where on Wrangell
Island (Ostrov Vrangelya) the Church will be standing, other
that is near a "military town"?

My guess it will be near the Nasha River.

Background: It was on 17 August 1866, that the first landing took place upon Wrangell Island. It was a party of Hawaiians from the ship "W. C. Talbot" under an Hawaiian Flag.

The second landing took place on 12 August 1881, this time
the landing party was headed by William Edward Reynolds, who
later became the first Admiral of the United States Coast
Guard. This landing place was at the mouth of the Clark
River.

Spelling the island Ostrov Vrangelya in English is "Wrangell
Island". That was how Admiral Wrangell asked his name to be
spelled when writing in the English language. I suggest to the editor as an emendator to correct the spelling to
"Wrangell Island".