Hagia Sophia: Such ecstasy can never be forgotten! 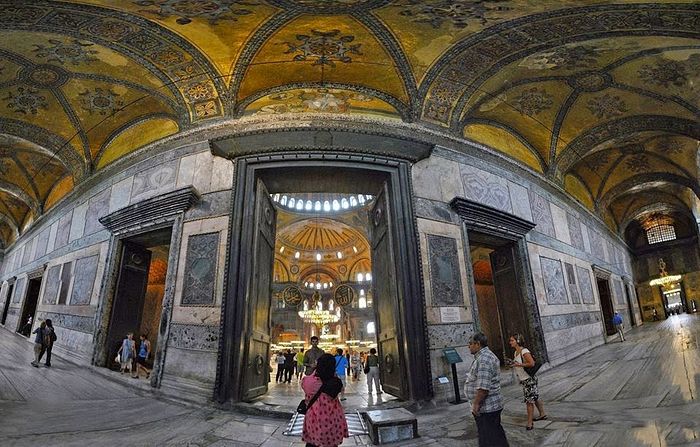 The Great Church, “a magnificent sight and for those who see it supernatural, for those who hear of it absolutely unbelievable”, according to Procopius, and “the crown of Byzantine architecture”, according to Runciman, is the masterpiece of Justinian, who dedicated it to the Wisdom of the Word, to Christ, symbolizing the nature of his Empire once and for all over centuries. This masterpiece, which is still unsurpassed after fourteen hundred years, “would be sufficient for Justinian who conceived it as a vision and created it in such a perfect way to be called ‘Great’”, maintains the architect of the Patriarchal House, Aristides Pasadaios.

Haghia Sophia is 77 m long and 72 m wide, with an enormous dome 33 m in diameter, 62 m above the ground, giving the pilgrim the feeling of the covering sky. It is the church built by Anthemios of Tralleis and Isodoros of Miletos using all their imagination and skill on the site of an older church in the same yard as St. Irene, Ivithin the walled area where “the important political buildings laround the Augustaion were to be found”: i.e., the Senate, the Palace and the Hippodrome. Its original founder is considered to be Constantine the Great, who built his own church of Divine Wisdom next to what was then the bishop’s church of Divine Peace. It was rebuilt by Theodosios II and inaugurated in 415, only to be set on fire on 15 January 532 during the revolt of Nika.

It was then that Justinian conceived the grandiose plan of rebuilding it completely. The engineering daring and architectural Imagination of Anthemios and Isodoros erected this enormous Idome on four pillars, creating this unique, unrepeatable wonder of architecture, this unsurpassable example of a domed basilica, in ifive years, ten months and four days. Rightly, when the “builder” [Emperor, who had envisioned a symbol worthy of his empire, saw Ithe completed work for the first time, he uttered the legendary jbords “I have beaten you, Solomon”.

Comparable with the architecture is the internal decoration of jhe Great Church, with its marble revetments on the walls, the Elegant columns, the artful capitals with Justinian’s monogram, and tall the other works of art that were to make Haghia Sophia a target Iof future looting, but also a fairy tale and a legend.

From the time of its being built until the eve of the Fall of the City, Haghia Sophia was the pride and the jewel of the Byzantine Emperors, who, regardless of the state’s occasional financial straits, looked after it and took care of its splendour. One can see this more Easily and more convincingly in its pictorial decoration. From the oldest mosaic of the pendentive of the apse of the Chancel, with the R/irgin Mary enthroned, to the enormous Prayer, unrivalled in skill, of the period of the Palaeologoi, on the west side of the south gallery, the mosaics of the Great Church tell of the adoration and devotion to it of the Kings and Queens.

It could not be otherwise than for this magnificent church of Divine Wisdom to be the seat of the Bishop of Constantinople, and later of the Ecumenical Patriarch. Throughout its history, until that last hour of 29 May 1453, the Great Church was one with the Ecumenical throne, bequeathing forever to the Patriarchate of Constantinople the title of the Great Church of Christ.

In the time of Justinian, it had a thousand clergy and in Neara, Herakleion, there is a catalogue listing in the 7th century 600 people, consisting of “80 priests, 150 deacons, 40 deaconesses, 70 sub-deacons, 160 lectors, 25 cantors, and 75 door-keepers”. Until the 11th century, Haghia Sophia held mass on the great celebrations and weekends, but Constantine Monomachoi “ordered mass to be celebrated every day, giving the church some new revenues”. But difficult times followed: the Franks came in 1204 and stripped it of all its treasures, while later the shrinking of the Empire and its subsequent poverty brought its income to the point where there was “only enough for its lighting”.

However much one writes, whatever one says, it will always be insufficient to describe the Great Church, and certainly even less for anyone who has visited it, if only once in his life.

You can remember the first time when, as a young man, you realized your childhood dream of visiting Haghia Sophia. It was a spring morning in May when you found yourself there in the centre of the church, which you decided to describe in your examination on the history of art, where you excelled. The sight was beyond all your expectations, more mythical than all the accounts that had fed your childhood imagination, and more wonderful than your teacher’s admiration for the splendour of the architectural conception. As you raised your head to look for the point where! once the Pantocrator ruled, you saw the beams of the sun, which : had just risen, slipping through the windows in the dome and combining with each other to make it still higher, so that as it was suspended above the light, it was transformed into the all-including sky.

Such ecstasy can never be forgotten! Every time you find yourself there again, you relive that magical morning when you were captivated by the reflections of the light and the colours. Then, leaving the iridescence behind you, you go on and stand opposite the apse of the Chancel where the Virgin Mary enthroned tenderly holds by the shoulder the all-mighty Pantocrator, who raises His tiny hand to the maternal caress or to bless the whole world. Such artistic completeness of expression of the human nature of Christ is rare, but far from disrupting the theological! content of the depiction, it keeps the dogmatic essence intact.

Those who over the centuries actually saw the miracle of Haghia Sophia at first hand are innumerable. They spoke over and over again about what they had seen, trying to convey to others too something of its magic and magnificence.

And that is how the legend of Haghia Sophia came about. Moscow Wants Turkey to Return Cathedral of Agia Sophia to Orthodox Church
State Duma deputies have supported the idea of the return of Agia Sophia in Constantinople to the Orthodox Church. This was stated by Chairman of Committee on Property, and the coordinator of the inter-factional parliamentary group on the protection of Christian values, Sergei Gavrilov, TSN reports.