Restoration of Resurrection Cathedral at the New Jerusalem Monastery Complete 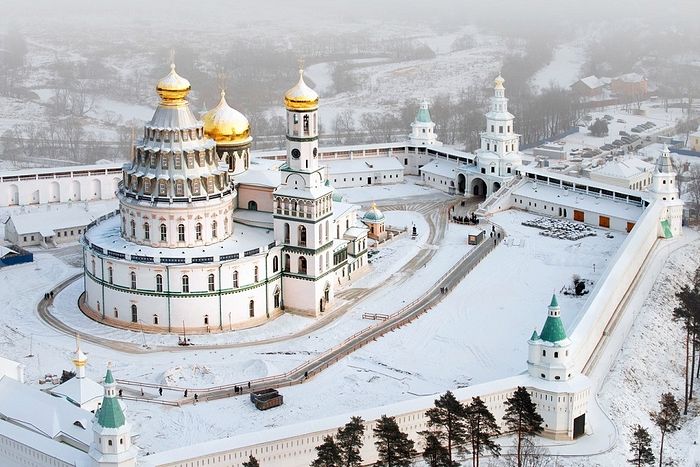 The reconstruction and restoration of the Resurrection Cathedral at the New Jerusalem Monastery is now complete, the historic cathedral is once again ready for worship. Situated in the town of Istra, which is about 40 kilometers (25 miles) west of Moscow, the monastery was founded in the 17th century by Patriarch Nikon. The Russian Orthodox Church have not yet set a date for the consecration of the cathedral.

In the historical documents of the 17th century, the main cathedral of the New Jerusalem Monastery was called the Great Church of the Resurrection. It was conceived by Patriarch Nikon in the image of the Church of the Holy Sepulchre in the Holy Land, but its fate over the centuries has not been an easy one. In 1723, the rotunda roof collapsed, a fire three years later caused further damage. For the next twenty years, the church stood virtually without a roof. The final blow came in December 1941, when the Nazis blew up the Resurrection Cathedral along with other monastery buildings.

"For the first time in its 360-year history, the cathedral has been completely restored. All that we have dreamed of and waiting for all these years has finally been accomplished today", - said the governor of the New Jerusalem Monastery Abbot Feofilakt Stavropegic (Bezukladnikov).

During the past few years both locals and Orthodox Christians watched patiently the restoration progress of the Resurrection Cathedral, including the gradual recreation of the unique 12-tiered 24-meter iconostasis made of delicately restored tiles.

In March 2009, Russian President Dmitry Medvedev signed a presidential decree for the restoration and renovation of the New Jerusalem Monastery, considered to be amongst the largest and most ambitious reconstruction and restoration projects in post-Soviet Russia. Russian Church founds diocese in Yaroslavl Region, parishes in France, Spain
Two new parishes, in the city of Montgeron, France, and in the city of Vila-Seca, Spain, have been included in the Diocese of Korsun.

Jonathan Aikman5/30/2016 2:12 am
I would very much like to see the bell tower of the Joseph-Volokolamsk Monastery rebuilt in line with restoration work at New Jerusalem. Can you tell me if there are any plans to do this as it needs the tower putting back. Thanks.
×