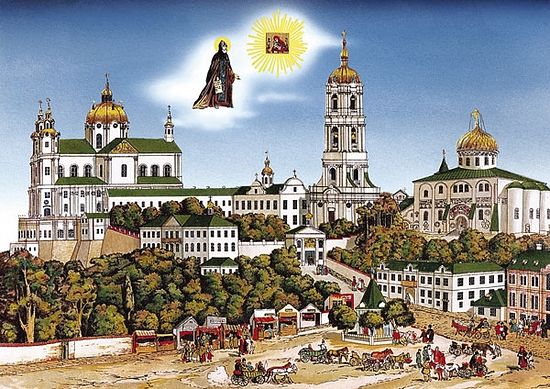 Director of the Russian Institute for Strategic Research Leonid Reshetnikov believes there is an attempt to eliminate Orthodoxy in Ukraine.

"Ukrainism from the very start was an anti-Orthodox concept: it was directed not only against Russians, against Moskals (Moscovites - IF), it was directed against Orthodoxy. This concept was formed in the West, in Austria-Hungary, in Poland, in Catholic countries and it is realized today," Reshetnikov said in his interview with the Radonezh radio.

According to him, the current task in Ukraine is the "exclusion of Orthodoxy as a foundation of our Russian Orthodox civilization but there wouldn't be civilization without it."

Reshetnikov noted that the Ukrainian Orthodox Church urges opponents to peace, but it shows that it does not understand "that the opponents are not people, they are satanic forces. They don't aim to live in peace, to reconcile, but they aim to eliminate, and at this time the only choice is to bear our cross, to confess Christ till the end."

"I am absolutely sure that the majority of believers belonging to the UOC-MP firmly defend Christ and stick to the positions of Orthodoxy. They won't betray Christ! They are the only real force in Ukraine, in Kievan Ukraine that resists, sometimes silently, not in barricades or attacks, but in their adherence to faith they resist! And the victory will be theirs," Reshetnikov said. Holy Synod of UOC MP: let’s not give in to provocations
In its special address, approved at the meeting of the Holy Synod in Kiev on October 27, the Ukrainian Orthodox Church of the Moscow Patriarchate called upon its faithful members not to give in to provocations and expressed its concern over “the situation around the preparation for the Pan-Orthodox Council”. The Church has addressed all those involved with the request “to do everything to preserve the rules, traditions and customs of the Holy, Apostolic Orthodox Church”.

Christians persecuted in Ukraine by national-radical forces - Lavrov
"Three Orthodox priests have been killed, and many others have fled to Russia from extremist threats," he said.
Comments

Sally ILoff5/2/2016 9:20 pm
The elimination of Orthodoxy across the world is not only for Ukraine, it is for the entire world. The Catholic institution is falling apart by the storm of secularism and internal corruption. The pope fervently tries to save it by turning back to the roots of the faith - Orthodoxy. He also wants hand-to-hand close contact with the Orthodoxy in order to save the Catholicism from extinction. Such an irony - going back to what they try to destroy in 1000 years. But God's plan shows great wisdom - everyone that wants to be saved and follow Christ, even not in Orthodox Faith, needs to walk closely with the Orthodoxy.
Now for that reason devil needs different allies. They are there ready - today we call them secularism, Western Democracy, and falls prentices for human rights.
Obviously as in the time of devil's servants communists the Orthodoxy is the most dangerous opponent of Lucifer. Now he is preparing to launch another evil plan against Christ followers - Ukrainian Orthodox Church. If he did not succeed in ex USSR and today Russia why not in dissolute Ukraine, where only the Orthodox Church can save the nation. I pray as in the past as today the enemies of the Orthodox Church to face what the communists faced 26 years ago - dissolution, no matter how they call themselves, they deserve the destiny of the Soviet Communists; God protect your fervent faithful bride in Ukraine, please!!!!!!

Belay1/16/2016 6:36 am
Orthodoxy is the foundation of world peace and prosperity. It all begins with the work of Christ and his apostles. I am perfectly sure that no one has the power to eliminate this faith. Every one knows that Orthodox followers are duty conscious, lover of world peace, hopeful and confidential in their faith. Long live to Orthodox and its believers!