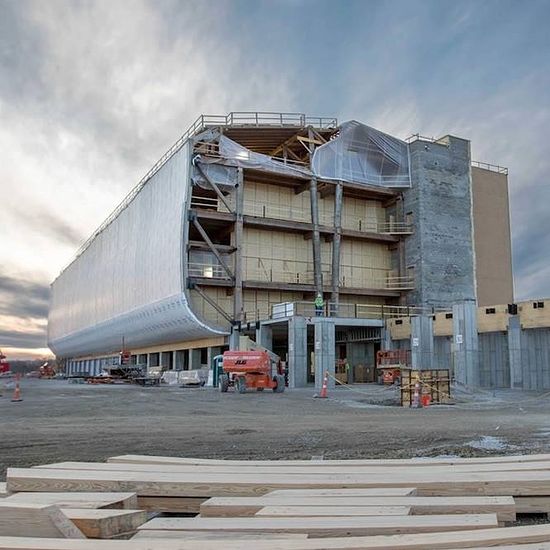 With more than 1.4 million visitors expected, tickets will be sold for separate daytime or evening visits during the first 40 days of opening, starting July 7. The 40 days and 40 nights theme reflects the number of days and nights it rained while Noah and his family were on the Ark, as documented in Genesis 7.

The Ark Encounter will be located in northern Kentucky (south of Cincinnati). Workers at the Williamstown site are busy constructing the internal exhibit areas of the Ark now that the external shell is largely complete.

The main attraction is the largest timber frame structure in the world, standing at 510 feet long in accordance with the dimensions specified in the Bible. The Ark Encounter's vast size is getting a lot of attention not only across the United States, but around the world.

Ken Ham, president and founder of Answers in Genesis, said in a statement to The Christian Post that he's "eagerly looking forward to the educational and evangelistic opportunity the Ark will be for so many thousands of guests expected to visit daily during the first 40 days and nights."

"Today, we don't need another Ark to save animals and people from a global Flood," Ham said in the statement. "But we do need another kind of Ark, to take people on what we are calling a 'voyage of discovery.'"

The Ark Encounter will be able to accommodate about 16,000 guests per day, but tickets have gone to pre-sale because research has shown that more people than that could be expected during the first few weeks of opening, because of the summer.

For the first 40 days, guests can purchase daytime tickets for 9 a.m. – 4 p.m. or night time tickets for 5 p.m. – midnight, a method hoping to alleviate the crowds. The day and evening times will also offer some differing experiences. Tickets are $40 for adults, $28 for children and $31 for seniors.

So far, over $88 million of the $92 million needed for the construction has been raised through bonds, donations, and memberships.

A decision is still pending on whether the Ark Encounter will be able to participate in the state's sales tax rebate program for tourist attractions, which is currently being litigated.

It is anticipated that thousands of new jobs will be created outside of the Ark theme park, and new hotels and other businesses are under development near the Ark site as well.

The Creation Museum in Petersburg, 40 miles from the Ark site, has been visited by over 2.5 million guests since opening in 2007. In the past two years, the museum unveiled a world-class $1.5 million exhibit of an allosaurus dinosaur skeleton, and it hosted the famous Bill Nye/Ken Ham evolution-creation debate (estimated to have now been watched by upwards of 15 million people). The God-Seer Moses as a Prophet of the Past
Jesse Dominick
The prophet Moses occupies a unique position in the Scriptural Tradition of prophecy, having been granted not only to see the future and call the people to a greater faith in God, but alone was given to see the awesome creation of the world—that which God alone witnessed, and God alone can reveal. Moses, alone in the Scriptural canon can be called a prophet of the past, and his experience is confirmed for us in the experience of the saints in every age of the Church. He responded to the call of God and ascended the mountain to speak with Him, experiencing divine vision in His presence, and in turn offering to us the life-giving knowledge of the creation of the world, and there arose no greater prophet in Israel like unto Moses, whom the Lord knew face to face (Deut. 34:10). Interview with Fr. Damascene (Christensen), from the Monastery of St. Herman of Alaska in Platina, California
Nun Cornelia (Rees)
On Wednesday, the fourth day of the annual Nativity readings began the conference section dedicated to the «Orthodox understanding of creation of the world». One of the speakers was an Orthodox hieromonk, Fr. Damascene (Christensen), an American from the Monastery of St. Herman of Alaska in Platina, California, which belongs to the Serbian Orthodox Diocese of Western America. This monastery is well known in Russia as the home of Fr. Seraphim Rose, its founder, and Fr. Damascene is a member of the Brotherhood from the time of Fr. Seraphim’s repose. He is the author Fr. Seraphim’s biography (due to appear in a new Russian version this year under the title Father Seraphim Rose: His Life and Works), and is something of an expert on Fr. Seraphim’s Life and writings in general.
Comments

Isidora5/18/2016 11:50 am
I plan to visit as soon as I have vacation time. Ken Ham's work is always based in exacting research so I am certain this museum will give an amazing sense of what it was like to have been on the ark and more. Glory to God whose word is TRUTH! And thank God for men like Ken who have looked hard at the evidence and see there is no reason to enable the atheists and believe their very weak origin myths paraded as science.

Nathan1/29/2016 4:02 am
It would be way better to raise 92 million dollars in order to build orphanages, monasteries, churches, and the such, maybe a homeless shelter, rather than a giant replica ark for tourists. I do not feel as if Ken Ham is doing the right thing. This seems stupid to me, I am sorry, but it just seems stupid. I don't understand why Christians need this.
×