The Pan-Orthodox Council: the Patriarch of Jerusalem expresses his willingness to make concessions to the Church of Antioch

The issue of the Church jurisdiction of Qatar remains the bone of contention between the Orthodox Patriarchates of Jerusalem and Antioch. 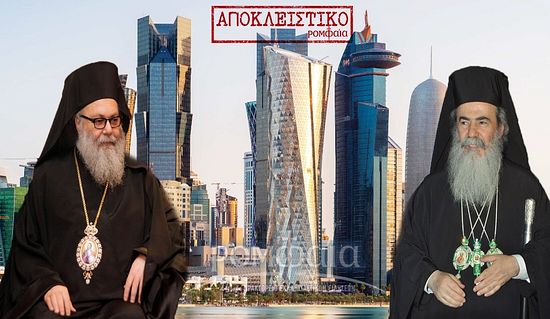 It has been reported that as a result of the Chambesy meeting, Patriarchs Theophilos III of Jerusalem and John X of Antioch (who did not come to Chambesy) are willing to make efforts towards reconciliation.

According to the exclusive information by the Romfea Greek Church news agency, the Patriarch of Jerusalem has expressed his readiness to make concessions and find “a golden mean” in the negotiations on the present issue.

Nevertheless, the Antioch party stipulated certain conditions which Patriarch Theophilos of Jerusalem has decided not to reveal, lest all the efforts towards the reconciliation should be vain.

The Church of Antioch broke off Eucharistic communion with the Patriarchate of Jerusalem. The reason for the break is the dispute over the canonical jurisdiction of Qatar territories, to which both Local Churches have claims.

It has been also reported that Archbishop Chrysostomos II of Cyprus invited the primates of both Local Orthodox Churches to Cyprus so that through the mediation of Patriarch Theodore II of Alexandria, they might settle the controversial question and come to an agreement of opinion prior to the beginning of the Pan-Orthodox Council scheduled for June.

It should also be noted that the Patriarch of Antioch did not show disapproval over Metropolitan Makarios’s services in Qatar. He only demanded that the metropolitan refuse his current title, “Metropolitan of Qatar”, and take another title, so that it was absolutely evident who has rights in this region. Primates of Local Orthodox Churches celebrate liturgy at St. Paul church in Chambesy
After the Reading of the Gospel, His Holiness Patriarch Bartholomew addressed the congregation, saying in particular, "It is a special joy for us to have an opportunity to testify to our unity and mutual love through the common Cup of Life, when we offer the Bloodless Sacrifice of the Body and Blood of the Lord so that we may carry out the highly important and the most complicated work of the Syntaxes and fulfil our church service in general."

Address by His All-Holiness Ecumenical Patriarch Bartholomew To the Scholars’ Meeting at the Phanar (January 5, 2016)
Ecumenical Patriarch Bartholomew
"Our faith should not be regarded as stagnant or even obsolete. It must not be conveyed as verbose or perhaps artificial. And it cannot be dismissed as merely cerebral or uninspired. Our word must express the hope and joy, the light and life of the risen Lord. It must be renewed and renewing, reviving and refreshing."
Comments