A Mercy of Peace

Fr. John Whiteford answers the question: “I have heard it argued that the phrase in the Liturgy, “A mercy of peace, a sacrifice of praise” is both nonsensical and a corruption of an earlier text. Is this correct, and if not, what does the phrase mean?” 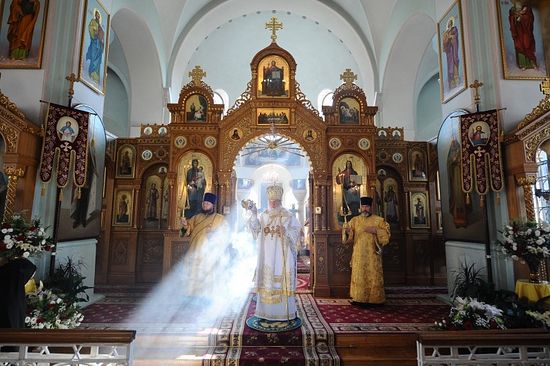 It is true that there are some textual issues related to this text. There are number of manuscripts that read, “Mercy, peace, a sacrifice of praise,” and some argue that this reading makes more sense. However, in an article by Robert Taft on the subject, the oldest text that is cited is text of the commentary on the Divine Liturgy by St. Germanus of Constantinople, and it has the reading just as we use it today1, This variant also made its way into the pre-Nikonian Slavonic texts, though since the Nikonian reforms, the mainstream Slavonic texts have followed the standard reading.

The fact that the standard text is criticized as being a more difficult reading is actually an argument in favor of its authenticity. One of the basic principles of textual criticism is that (all things being equal) the harder reading is more likely to be original, and a smoother reading is more likely the result of a later correction. If such a “harder reading” were found only in an isolated manuscript here or there, one could perhaps make the case that it was the result of some error in copying—but not when such a reading is the predominant reading.

In any case, whether it was the original reading or not, it is the accepted reading that the Church has embraced. That being the case, suggesting that the text is “nonsensical” reflects both a lack of humility and piety. If the Church has embraced it, it cannot be nonsensical. It may be that it is hard to understand, or that one might not understand it; however, just because a person does not understand what it means, this does not mean that it is incapable of being understood. After all, this is not a line from some obscure text that few would have ever encountered, or would have encountered infrequently. This is a line from the most prominent part of the most prominent service of the Church, which is served almost every day of the year. Consequently, it is unfathomable that such a text could have gained such wide acceptance in the Church had it truly been nonsensical.

Some try to argue that the text, at least as it stands in English, is ungrammatical, because “mercy” is an uncountable noun, and so cannot be used with the indefinite article (“a”). However, if you look up the word “mercy” in Merriam Webster’s dictionary online, one of the examples of how the word is used is, “it was a mercy they found her before she froze.” Countless examples of this could be cited from the great works of English literature... and so it is simply not true that this construction is ungrammatical.

Fr. Thomas Hopko provides a concise explanation of what this means:

The Holy Oblation is Christ, the Son of God who has become the Son of Man in order to offer himself to his Father for the life of the world. In his own person Jesus is the perfect peace offering, which alone brings God’s reconciling mercy. This is undoubtedly the meaning of the expression a mercy of peace, which has been a source of confusion for people over the years in all liturgical languages.

In addition to being the perfect peace offering, Jesus is also the only adequate sacrifice of praise that men can offer to God. There is nothing comparable in men to the graciousness of God. There is nothing with which men can worthily thank and praise the Creator. This is so even if men would not be sinners. Thus God himself provides men with their own most perfect sacrifice of praise. The Son of God becomes genuinely human so that human persons could have one of their own nature sufficiently adequate to the holiness and graciousness of God. Again this is Christ, the sacrifice of praise2 Elijah’s Mantle: Helping Grow Orthodox Missions
Matthew Joyner
The material needs of Orthodox worship are beautiful and wonderful, but also immense. These many material requirements of Orthodox worship create an interesting problem for new missions and small parishes. Worship in the Orthodox Church is brought to full bloom when the faithful are surrounded with beautiful icons, vestments, and all manner of liturgical items. The kingship and majesty of Christ is, in part, reflected in the furnishings of the Church. Divine Liturgy and the Great Thanksgiving
Vincent Gabriel
Standing at the south corner of the altar, the deacon quietly utters to the presiding priest: “It is time for the Lord to act.” This phrase sets the tone for everything in our worship. We are not performing some sort of magical act that assuages the deity in our favor, but are rather joining in with the liturgy of eternity; the liturgy of his own actions in our favor; the liturgy which has, and is, and ever shall be taking place; the liturgy which is the great thanksgiving—the great Eucharist—of God. Richard2/2/2016 3:43 pm
I was surprised not to see mentined here the reading "Oil of peace",(based on the confusion between two similar Greek words) which I have seen elsewhere. This reading - particularly if interpreted as "Anointing of Peace" makes a lot of sense to me!
×