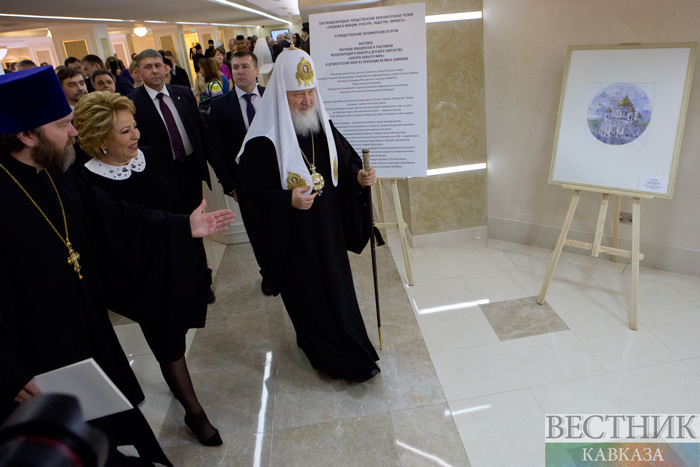 Christmas readings have been held annually in Moscow since 1993. They are positioned as a Church-public forum in the spheres of education, culture, social service and spiritual and moral education. This year the theme of the readings was ‘Tradition and innovation: culture, society, personality.’ As stated at the forum by the Chairwoman of the Federation Council, Valentina Matviyenko, this issue affects one of the most painful points of the modern world: ‘’The 21st century is characterized by the rapid development of information technology, affecting all aspects of human life. It is very important along with the development of new knowledge and skills not to lose the basic moral values of our Russia nation, and those upon which the civilization of all mankind is based. There is unprecedented pressure in the global information sphere at the moment," she stated.

According to Matvienko, "We see in a number of Western countries that the concepts of good and evil are replaced sophisticatedly and cynically. Traditional family and moral ideals are overthrown. There is a serious threat from extremist and terrorist organizations, distorting the meaning of spiritual teachings that incite war and hatred among peoples.’’

The speaker of the Federation Council is convinced that victory in the battle for minds, ideas, and values can be gained only by joint efforts of the state, society, the Orthodox Church and other traditional religions of Russia, and each strong Russian family. "The opponents of traditional values see them as a major obstacle to human freedom, something that does not allow them to implement it fully. I cannot agree with this at all. The fact is that freedom can be interpreted as freedom from and freedom to. In the West, the emphasis is on the first – freedom as 'liberation' from any and all restrictions in the cultural, moral field, as a movement of permissiveness. The choice of Russia, the Russian Orthodox Church, is the opposite. Freedom is perceived as the removal of barriers, the expansion of opportunities for hard-won approval of mankind the highest moral and spiritual ideals, goals, doing good. This gap, this section in the information, the culture of the spirit, unfortunately, becomes wider and deeper,’’ Matvienko says.

However, she noted: "We do not put a shield up to world culture in any way, part of which is the culture of our country. We put a barrier up to what I would call an ersatz culture. Opposition to it is not only a matter of the state, but also of civic society and the media, but above all, it is the duty of the artists themselves. We have to put a barrier up to immorality, cynicism, misanthropy, finally, vulgarity and bad taste. Russia is a country of talented people, brilliant culture, art, we must make up for the impact of wry Western fashion. "

In Orthodoxy, the family is often called the Little Church. To destroy the family means to destroy the country and civilization as a whole. State, society, and the Church must fully support and help the family. Today we are pleased to note that governmental measures, measures for the implementation of the national strategy of action for children, has achieved good results in the field of population policy, increasing the availability of pre-school institutions, the social protection of orphans and children left without parental care."

With regard to the humanitarian component of education, then, Matviyenko initiated discussion concerning the teaching of religious culture in schools. Preserving Traditions: A Thread of Succession Survives in Moscow

Preserving Traditions: A Thread of Succession Survives in Moscow
The following interview with Boris Ivanovich Kulikov, who was one of the most prominent choral conductors and educators of the Soviet Era, and is now a practicing Orthodox believer, offers valuable insights into some of the struggles that church music in Russia has undergone and continues to undergo as it strives to resurrect and preserve that fragile and precious thing called “tradition.” "We Shouldn't Integrate with Europe as Guided and Weak Partners" - Patriarch Kirill
Patriarch Kirill of Moscow and All Russia believes that dialogue of Russia and Ukraine with the European Union should be held from positions of equal rights.
Comments
×