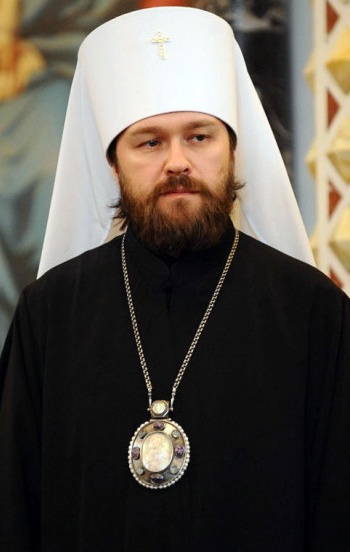 Head of the Synodal Department for External Church Relations Metropolitan Hilarion says there is no grounds for the concerns of some believers about the coming Pan-Orthodox Council.

"Unfortunately, there have been many rumors surrounding this Council. For example, they say it will be 'the eighth Ecumenical Council,' it will be 'anti-Christ,' the union with Catholics will be concluded, all fasts will be abolished, priests will be allowed to marry for the second time, it will be a modernist council," the metropolitan said on Wednesday at a press conference in Moscow.

He says that the DECR receives letters urging not to participate in the 'Ecumenical' or 'anti-Christ' council every day. The hierarch also said that the Russian Church had many concerns about the meeting, for example, that some decisions would be imposed on its participants, for example, approving of a new church calendar.

"We agreed that all decisions in the Pan-Orthodox Council will be taken by consensus," the metropolitan stressed.

According to him, every local Church will send a delegation of 24 hierarchs, but each Church will have one voice and if "even one Church is against any decision, this decision won't be taken."

Besides, questions that were not previously agreed upon will not be on the agenda and all the documents worked out in the course of preparations to the council are published. The 5th Pan-Orthodox Pre-Council Conference Begins Its Sessions
At the instruction of Patriarch Kirill, Metropolitan Hilarion expressed the Russian Orthodox Church’s deep concern over the anti-canonical actions of hierarchs of the Patriarchate of Constantinople’s Ukrainian church structures in the USA and Canada.
Comments

Thomas Carney5/5/2016 4:20 pm
I can understand the Orthodox peoples' concerns for the Pan-Orthodox Council. Vatican II was a "council" where the agenda was agreed upon in advance and the whole new agenda was imposed once the disastrous council started. At a SCOBA meeting of American Orthodox bishops an agenda was agreed upon and once the meeting started a whole new agenda was imposed by the "leadership." This meeting, which took place in the late 1990s was a semi secret meeting to make the Orthodox in America an autocephalous group. One bishop that was there, Metropolitan Nicholas of Amissos, of blessed memory, sent a FULL REPORT of what went on to the EP. Then-Archbishop Iakovos of North and South America, was called to Constantinople, raked over the coals and forced to retire.

Previously agreed agenda mean nothing. The ones in charge in charge of the meeting determine the agenda. IF the "leaders" of this Pan-Orthodox Council pull a "bait and switch" at the council, then the Moscow delegation should WALK OUT and tell the world what happened.

Secondly, this council is unusual in the sense that ONLY patriarchs are going to be there. In the Orthodox Church ALL BISHOPS ARE EQUALS, some higher in honor than others, but NOT in authority. If this were to be a true Orthodox Council, ALL BISHOPS should be there.