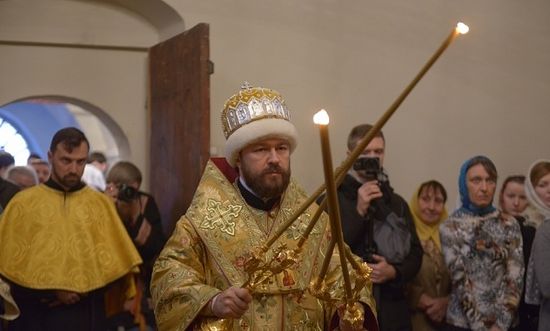 On December 13, 2015, the 28th Sunday after Pentecost and the commemoration day of St. Andrew-the-First-Called, Metropolitan Hilarion of Volokolamsk, chairman of the Moscow Patriarchate’s Department for External Church Relations (DECR) and chairman of the Commission on Old Believer parishes and cooperation with the Old Believer community, celebrated Divine Liturgy at the Church of the Protecting Veil in Rubtsovo, at which the Patriarchal Center of the Old Russian Liturgical Tradition operates.

Attending the Liturgy were Vladimir Yakunin, a founder of the St. Gregory the Theologian Charity Foundation, and Leonid Sevastianov, executive director of the Foundation and member of the Supervisory Board of the Patriarchal Center of the Old Russian Liturgical Tradition.

After the Litany of Fervent Supplication Metropolitan Hilarion lifted up a prayer for peace in Ukraine and addressed the worshippers, telling them in detail about the life and ministry of St. Andrew-the-First-Called, including the story of his apostolic mission in our land. St. Andrew was "the first baptizer of the Russian people even before St. Vladimir. It was St. Andrew who sowed the seeds of Christian preaching that later bore abundant and blessed fruits," Metropolitan Hilarion said and congratulated all reverend fathers, brothers and sisters on the feast and wished them St. Andrew’s aid in their labors.

Foxy lady: 70yo Russian Old Believer's only fear is hungry Siberian predator
Agafia, who has been living in a Siberian forest her whole life, says she has no plans to move to civilization. Discovering Russian Orthodoxy: The Old Believers
Semyon Kvasha
RBTH presents a brief history of the Russian religious movement of the Old Believers, which appeared in the 17th century as an attempt to protest against the Orthodox Church's reform.
Comments