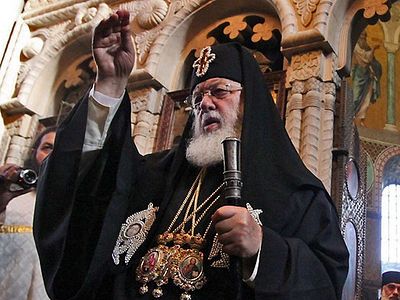 The Georgian Patriarchate has asked the interior minister to provide security to citizen Giorgi Tatishvili, a representative of the LGBT community who campaigns for their rights, who has filed a lawsuit with the Constitutional Court seeking the legalization of same-sex marriage.

"As we know, most of our people (regardless of nationality and faith) feel negatively about this law. For this reason, there is a threat that certain forces will use this situation for provocation and the life of Giorgi Tatishvili may be in danger," the patriarchate said in a statement.

The statement says that, despite the fact that the Georgian Orthodox Church "condemns and considers this step (let alone the adoption of a law) to be unacceptable, violence and, naturally, manifestations of violence in its gravest form are also unacceptable."

"For this reason, we are asking the interior minister to take this fact into account and provide Giorgi Tatishvili with security in a timely manner," the statement says.

According to reports released in late January, a lawyer for Giorgi Tatishvili told reporters he had filed a lawsuit with the Georgian Constitutional Court seeking the legalization of same-sex marriage in the republic.

The lawyer said he had filed the lawsuit with the Constitutional Court as a private individual, not as a representative of some organization.

There was active debate on this issue in the Georgian media in 2015. Zurab Jornenadze, the head of the Georgian NGO Rights for Everyone, said last summer that the association agreement signed by Georgia with the EU envisaged official recognition of same-sex marriage in the country. Irakly Garibashvili, who was then prime minister, then told reporters that "there will be no same-sex marriage in Georgia and family is a union between a man and a woman."