What To Do With Saint Ignatius? 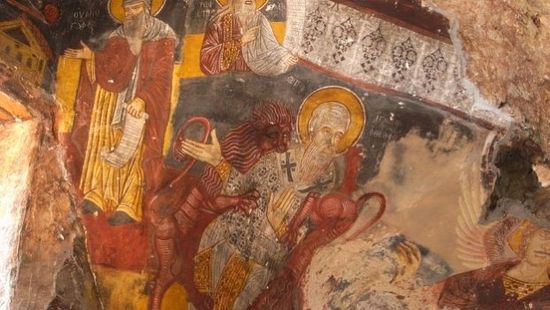 Of all the saints of the Church, Ignatius maybe had the biggest impact in leading me towards Orthodoxy. Saint Ignatius threw several wrenches into my Protestant Evangelical machinery.

After discovering him, I was faced with the question:

What do I do with Ignatius?

Here’s a brief bio that will explain why he was problematic for me:

Ignatius the God-Bearer was a disciple of the holy Apostle and Evangelist John the Theologian, and was the second bishop of Antioch, and successor to Bishop Euodius, Apostle of the Seventy. This means that Ignatius knew and was taught by the apostles. He was serving as bishop and was teaching while many of the Apostles were still alive.

In the year 106, the emperor Trajan (98-117), after his victory over the Scythians, ordered everyone to give thanks to the pagan gods, and to put to death any Christians who refused to worship the idols. In the year 107, Trajan happened to pass through Antioch. Here they told him that the elderly Bishop Ignatius openly confessed Christ, and taught people to scorn riches, to lead a virtuous life, and preserve their virginity.

Saint Ignatius came voluntarily before the emperor, so as to avert persecution of the Christians in Antioch. He rejected the persistent requests of the emperor Trajan to sacrifice to the idols. The emperor then decided to send him to Rome to be thrown to the wild beasts. Saint Ignatius joyfully accepted the sentence imposed upon him. His readiness for martyrdom was attested to by eyewitnesses, who accompanied Saint Ignatius from Antioch to Rome.

On the way to Rome, Saint Ignatius visited several churches, teaching and guiding the Christians there. He also wrote seven epistles: to the churches of Ephesus, Magnesia, Tralles, Rome, Philadelphia, and Smyrna. All these letters have survived to the present day.

On December 20, the day of a pagan festival, they led Saint Ignatius into the arena, and he turned to the people: “Men of Rome, you know that I am sentenced to death, not because of any crime, but because of my love for God, by Whose love I am embraced. I long to be with Him, and offer myself to him as a pure loaf, made of fine wheat ground fine by the teeth of wild beasts.”

After this the lions were released and tore him to pieces, leaving only his heart and a few bones. Hearing of the saint’s great courage, Trajan thought well of him and stopped the persecution against the Christians.

Here was my problem.

Because Ignatius was a contemporary and disciple of the apostles, his understanding of the apostolic faith would have been identical to that of the apostles. Yet his 7 epistles, which are his last will and testament, indicate multiple doctrines that did not fit my Evangelical image of the early church and interpretation of Scripture.

Here are a few:

“Wherever the bishop appears, let the people be there; just as wherever Jesus Christ is, there is the complete Church.” (Epistle to the Smyreans)

“as there is one bishop, along with the presbytery and deacons, my fellow-servants:” (Epistle to the Philadelphians)

2. The true presence of Christ in the Eucharist.

“They abstain from the Eucharist and from prayer, because they do not confess that the Eucharist is the flesh of our savior Jesus Christ, flesh which suffered for our sins and which the Father, in his goodness, raised up again… Let that be considered a valid Eucharist which is celebrated by the bishop, or by one whom he appoints.” (Epistle to the Smyreans)

“Take heed, then, to have but one Eucharist. For there is one flesh of our Lord Jesus Christ, and one cup to [show forth] the unity of His blood; one altar; as there is one bishop, along with the presbytery and deacons, my fellow-servants: that so, whatsoever you do, you may do it according to [the will of] God.” (Epistle to the Philadelphians)

“I desire the Bread of God, the heavenly Bread, the Bread of Life, which is the flesh of Jesus Christ, the Son of God, who became afterwards of the seed of David and Abraham; I wish the drink of God, namely His blood, which is incorruptible love and eternal life.” (Epistle to the Romans).

3. The necessity and efficacy of Baptism.

“He was born and baptized, that by His passion He might purify the water.” (The Epistle of Ignatius to the Ephesians)

This muddied the waters and eventually led me to Orthodoxy. I am not saying that all who consider the church that Ignatius painted will become Orthodox, but it was hard for me to support my own Scriptural interpretations against one who knew the writers of Scripture. John Lehman2/12/2016 12:26 am
Yes, for me, reading St. Ignatius and knowing about his close relationship with the Apostles re-inforced my decision to become Orthodox. I appreciate your clear summary or his teaching and last days on earth. I will refer to this when speaking with my evangelical friends.

One that zinged me was my inability to reconcile the fact that the fathers who decided the canon of the new testament did not have a Protestant view of scripture.


How could they have been inspired by the Holy Spirit to decide which books were divine scripture while lacking the understanding of the profound truths within it?