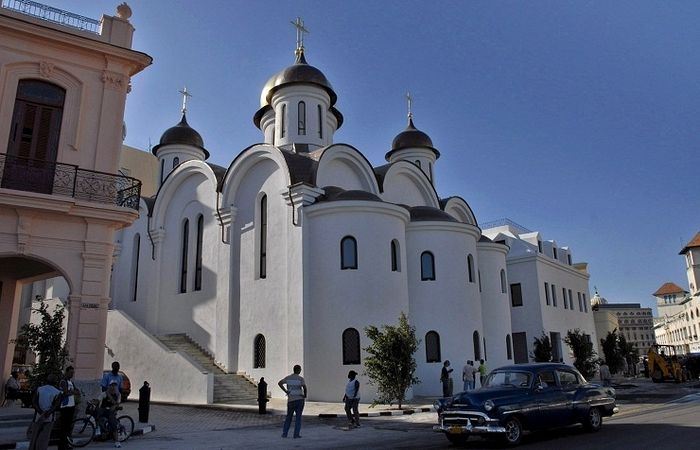 Catapulted into the news by the visit of the Russian Orthodox Church's patriarch, Kirill, to Cuba, the faith's cathedral in Havana breaks the colonial architectural monotony of the Old City, where it is recognized as one of the Caribbean island's rare and exotic jewels.

Standing on the shore of Havana Bay, the Byzantine-style structure stands out amid Spanish fortresses, convents, Catholic churches, cobblestoned streets and old mansions.

Six ornate cupolas crown the edifice, the first stone of which was laid on Feb. 14, 2006, by then-Metropolitan Kirill himself, who 32 months later consecrated the Orthodox cathedral to Our Lady of Kazan, venerated as the patron saint of the Russian people.

An image of Our Lady of Kazan welcomes the faithful and curious at the entrance to the church, built of more than a million Cuban-made bricks and containing furniture, lamps, bells and crosses brought from Russia and costing more than two million euros (about $2.25 million).

Another feature of this cathedral is that it is the largest, but not the only, Russian Orthodox church in the Cuban capital, with a small Greek Orthodox church consecrated in 2004 standing on the grounds of the nearby San Francisco Catholic convent.

Construction of the church was a long-standing dream of the many Russian Orthodox faithful living in Cuba, one of the Latin American nations with the largest Russian-speaking population.

The construction of the church coincided with the renewal of Cuban-Russian relations, which had undergone severe strain after the dissolution of the Soviet Union, Cuba's strong supporter in the decades following the Cuban Revolution.

Recognized by the Cuban government as a "cultural bridge" and "symbol of Cuban-Russian friendship," the cathedral was built by a joint team of designers and workers from the two nations.

Kirill's first patriarchal visit to Havana has been marked by the historic meeting he held with Pope Francis at the city's airport, the first between the two leaders of the Russian Orthodox and Catholic Churches in almost 1,000 years. Church of St. John of Shanghai and San Francisco Being Built at St. Elizabeth Convent in Minsk, Belarus

Church of St. John of Shanghai and San Francisco Under Construction at St. Elizabeth Convent in Minsk, Belarus
This church is very important for those who undergo treatment in the psychiatric clinic—as soon as it is opened, patients will have the opportunity to receive both spiritual and physical healing by participating in prayer, the Holy Mysteries and regular services.The church is named in honor of St. John because he dedicated his entire life to serving other people, including the sick, and he was known to often visit the sick in hospitals and has worked numerous miraculous healings.
Comments