Dallas Has A Saint 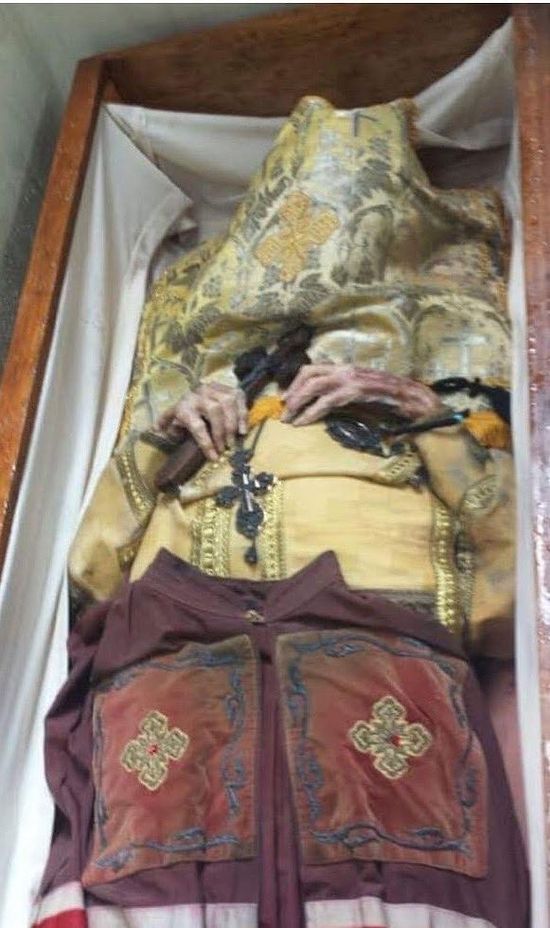 Above is an image taken today of the incorrupt body of Archbishop Dmitri of Dallas. He died in the summer of 2011, and was buried unembalmed, according to Orthodox tradition. On Friday his body was disinterred for transferral to his new tomb in St. Seraphim Orthodox Cathedral in Dallas, which was his own. When the cemetery personnel opened his coffin, they found Vladyka Dmitri incorrupt.

That is to say, his body had not decayed. He has been buried for four and a half years under the Texas ground, and his body looks like it did the day he died.

This is a miracle. In Orthodox and Roman Catholic Christianity, it is seen as a sign that the deceased was, and is, a saint. If you read The Brothers Karamazov, you may remember that whether or not the deceased Elder Zosima was incorruptible was a feature of the narrative.

In Dallas today, they found their incorruptible. I don’t suppose a soul who knew Vladyka Dmitri is surprised. I knew him in the last five years of his life. What a dear and holy man he was. He had an important part in my own coming to Orthodoxy. In the summer of 2005, broken and grieving over years of scandal and corruption in the Catholic Church, my wife and I began attending St. Seraphim Cathedral. We did not intend to convert to Orthodoxy; we simply wanted to be in a place where we could be confident the real presence of Christ was in the Eucharist (Catholic doctrine recognizes the validity of Orthodox sacraments), the liturgy was reverent and beautiful, and we could worship without being so overwhelmed by anger.

But we went anyway, showing up on a rainy August afternoon at the address on the card. It turned out to be not a palatial residence, but the modest two-story woodframe house behind the cathedral. Could this house, with the paint peeling, really be where the Archbishop of Dallas and the South lives? I knocked on the door, and in we walked, with our kids.

The house was jammed with people from the congregation. There were Russians and other Slavs, and Americans too. You could hardly move for all the people. Every inch of counter space in the kitchen was filled with dishes bearing up Russian food. At the far end of one counter was a gorgeous flan, made by Vladyka Dmitri himself. He loved to cook.

There he was, sitting at the table, his long, Gandalf beard resting on his black cassock. His eyes twinkled. He greeted us kindly. Later, we watched him remove himself to a side room where kids were playing, sit down on a low couch, and talk to them like they were his own children. He was 82 years old then, and was to those children a kindly grandfather figure.

“Come see this,” Julie said, pointing to Dmitri among the children. That’s not something we were used to seeing.

A short while later, in the kitchen, a Russian and a Ukrainian poured vodka shots for themselves and for me, and raised a toast to the Archbishop. “To Vladyka!” we said, then downed the vodka. Meanwhile, the ceiling began to leak in the poor old house. We chose to ignore it, because it was time to bless the food. Everybody became quiet as Vladyka turned toward the icon and began to pray.

It was a family dinner. That’s how it struck us. Archbishop Dmitri, born Robert Royster in Teague, Texas, was the opposite of everything I had come to expect in a bishop. He was humble and kind and gentle. He loved his people, and his people loved him. I remember thinking how good it would be to be led by such a man.

One day a few years later, after had become Orthodox, we were at Forgiveness Vespers, the pre-Lenten ritual that all Orthodox parishes do in which each parishioner must ask each other for forgiveness, and then offer it in return. Watching that tall, elderly archbishop bow before our three year old daughter Nora and ask her forgiveness — it took my breath away.

Nora did not know it at the time, but it was a saint of God who did her that honor.

Here’s what will happen today in Dallas:

On Saturday morning, March 5th, 2016 His Beatitude, Metropolitan TIKHON, will preside at the Divine Liturgy in St Seraphim Cathedral at 9:30 AM. Following the Divine Liturgy a Pannikhida will be served, after which we will solemnly process around the cathedral carrying the coffin of Archbishop Dmitri and place it over the prepared crypt in the Memorial Chapel. After the final litany, we will lower the coffin containing the body of Archbishop Dmitri into his final earthly resting place.

Holy Dmitri of Dallas, pray for us. I am sure that official canonization procedureswill soon be underway. What a blessing he was to all of us who knew him.

A saint. Our Vladyka. What a gift. Pentecost
Archbishop Dmitri (Royster)
At Babel a false unity established out of pride led to a scattering of all men, confusion among the citizens of the earth. Diverse "tongues," in this case, became indicative of divisions, man’s inability to understand God, his fellow man and environment. On Pentecost, however, the many "tongues" of the Divine Spirit became a sign and source for unity, a profound unity established through love for Christ that can only be granted by God Himself. Archbishop Dimitri of Dallas reposes in the Lord

Archbishop Dimitri of Dallas reposes in the Lord
Archbishop Dmitri was born Robert R. Royster into a Baptist family in Teague, TX on November 2, 1923. He often credited his mother with providing him and his sister with a strong, initial faith in Christ. After discovering Orthodox Christianity as teens, he and his sister asked their mother for a blessing to convert, whereupon she asked one basic yet predictive question: “Does the Orthodox Church believe in Christ as Lord and Savior?” Sunday of the Cross
Archbishop Dmitri (Royster)
The Cross is our badge and emblem as Christians. Remove the Cross from our lives and we have nothing. Without the Cross, both in Christ’s life and in ours, there is no genuine Christianity and consequently, no reason to observe Lent or any other sacred season. This fact may seem self-evident. Yet ours is a time in which words like sin, repentance, sacrifice, the Cross and crucifixion, are misunderstood, being viewed even by some Christians with suspicion, as "negative" terms, at least when applied to our own lives.
Comments

Ann K Hunter5/17/2016 10:06 am
My family is from Teague TX, and I think they and Robert Royster must have at least seen each other, could have even been friends. Just a possibility. I like this thought.

Vergie3/8/2016 6:47 am
These holy men restore our faith' redeem our spirits and make faith come alive again. In this age of so much corruption around us, it is essentail to know Go's miracles still exist to so many of us who the Truth of our faith.

Blessd St. Vladyka Dmitri pray to God to save our souls!

Luke Padgett3/6/2016 12:09 am
Glory to God! I served with Vladyka Dmitri at Holy Apostles parish in Oklahoma, which he blessed us to begin. I was also blessed to eat trapeza at his house. What a great blessing. I'm so happy.