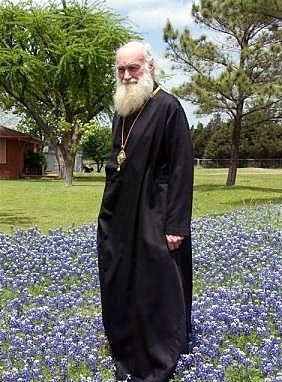 His Beatitude, Metropolitan Tikhon, presided at the Divine Liturgy celebrated in conjunction with the reinterment of His Eminence, the late Archbishop Dmitri of Dallas and the South, at Saint Seraphim Cathedral here Saturday, March 5, 2016. The celebration coincided with the Commemoration of the Departed—Memorial Saturday—that precedes the Sunday of the Last Judgment.

Archbishop Dmitri fell asleep in the Lord in retirement at the age of 87 on Sunday, August 28, 2011. See biographical details and related story.

On Friday, March 4, the body of Archbishop Dmitri was brought from Restland Cemetery to the cathedral, where it was greeted by many clergy and faithful, taken to the cathedral’s recently completed Memorial Chapel, and placed in a new coffin prior to the celebration of Vespers on Friday evening. Following Vespers, clergy and faithful prayed in the crypt and read the Holy Scriptures throughout the evening.

A Panikhida was celebrated after Saturday’s Divine Liturgy, after which Archbishop Dmitri’s coffin was lowered into his final earthly resting place in the Chapel’s crypt. 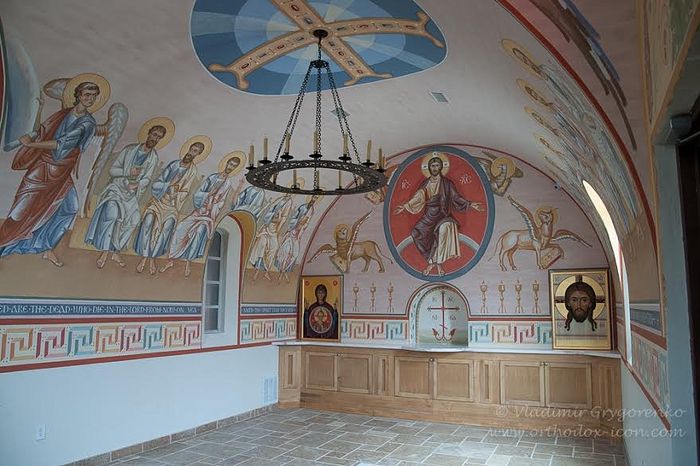 “Heaven and earth will pass away, but my words will never pass away.”

These are the words of the Lord we hear on this, the eve of the Sunday of the Last Judgment. They are comforting words, even if they are spoken in the context of the trials and tribulations of those days. They are words that we hear today, as we gather as a Diocesan family to reinter our beloved father in Christ, the ever-memorable Archbishop Dmitri.

Archbishop Dmitri was father of the Diocese of the South, the first bishop of the diocese, one who personally engaged with his people and his clergy, less as “master” than as first shepherd. I just returned from my first visit to the Orthodox Church of Finland with a small delegation. I learned that the Finns don’t use “master” as we hear it in English for the bishop, as in “master, bless.” Instead they use “esipaimen.” This has no other usage but for the bishop in the Finnish language, and means chief shepherd or first shepherd. It is an affectionate term with no connotations of authoritarian domination over subordinates. This was Archbishop Dmitri. And this is why in the Diocese of the South you didn’t just turn the page and move on when he reposed. This is why you are honoring him today.

At the same time, Archbishop Dimitri was also an uncompromising teacher of the Orthodox Christian faith who saw that we are in an age that will severely test our faith and commitment. This is the vigilant watchfulness of which today’s Gospel speaks. Archbishop Dmitri refused to sugar-coat the present challenges and insisted that today’s disciples of Christ more than ever must be built upon an unshakable rock. Of course, this rock foundation is Christ, but we ourselves are responsible—with God’s grace—to build upon that foundation. In his reflections on the Sermon on the Mount, first written for The Dawn and then published as a book with the title The Kingdom of God, Archbishop Dmitri speaks about the hard challenge of solid building and what our part must be: “So the Christian life is the one that is built on the foundation of the truth that Christ preaches. But it must also be built: one consciously adopts Christ’s way as his own way, and then absorbs the spirit of this way and makes it his own by experience. This he must do, no matter how impractical it may seem, no matter how unpopular it may make him, no matter how much at odds he may finally be with the society around him as a result” [The Kingdom of God, p. 123].

This is far from theoretical, abstract spirituality. Archbishop Dmitri goes on to say that it is only such solid building that will practically enable us to withstand the pressures, traumas and anxieties that will inevitably be thrown at us. In his words, “This kind of Christian life will not be shaken by the great crises that occur in one’s life…. The rain, the floods, and the winds (the world, the flesh and the devil) cannot undermine the edifice of faith in and obedience to Christ: no turmoil, affliction, no false accusations or plots, no bereavement, death or loss of friends, no sickness or suffering will destroy the house built on so firm a foundation” [pages 123-124].

The Epistle and Gospel for the departed reassure us that the dead in Christ are alive in Christ, asleep in Him and at rest, as they await the resurrection. “Most assuredly, I say to you, he who hears My word and believes in Him Who sent Me has everlasting life, and shall not come into judgment, but has passed from death into life” [John 5:24]. “For if we believe that Jesus died and rose again, even so God will bring with Him those who sleep in Jesus” [1 Thessalonians 4:14].

At Archbishop Dmitri’s funeral we sang the remarkable words of the exapostilarion sung at the funeral of all bishops and priests: “Now I am at rest. Now I have found peace. I have escaped corruption. I have passed from death to life. Glory to Thee, O Lord.” May that prayer of final peace be ours as well when we come to our final end. And in the meantime, like Archbishop Dmitri, may we entrust ourselves, and each other, and all our life unto Christ our God. Dallas Has A Saint
Rod Dreher

Dallas Has A Saint
Rod Dreher
Archbishop Dmitri, born Robert Royster in Teague, Texas, was the opposite of everything I had come to expect in a bishop. He was humble and kind and gentle. He loved his people, and his people loved him. I remember thinking how good it would be to be led by such a man. The Transfiguration of Christ
Archbishop Dmitri (Royster)
The disciples fell on their faces, for they could not bear, as created beings, the vision of glory. Only when Jesus touched them and told them to arise and not be afraid, were they able to return to the reality they knew. Our own credal statement, "Light of Light," with reference to the Son is testimony to our faith that God is light and that the Son is also light, and is related to this vision as the eternal, uncreated light on Mt. Tabor. Archbishop Dimitri of Dallas reposes in the Lord

Archbishop Dimitri of Dallas reposes in the Lord
Archbishop Dmitri was born Robert R. Royster into a Baptist family in Teague, TX on November 2, 1923. He often credited his mother with providing him and his sister with a strong, initial faith in Christ. After discovering Orthodox Christianity as teens, he and his sister asked their mother for a blessing to convert, whereupon she asked one basic yet predictive question: “Does the Orthodox Church believe in Christ as Lord and Savior?”
Comments
×