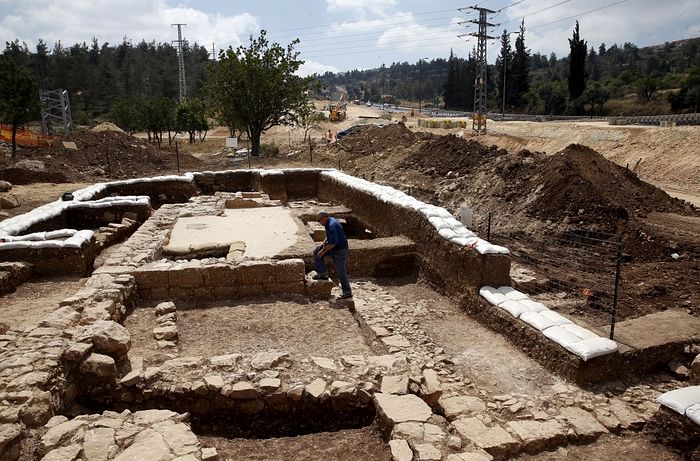 Archaeologists in Israel are "astonished and surprised" after finding artifacts dating back to Jesus' time at a local orphanage and military complex in Jerusalem.

The Israel Antiquities Authority said this week that it has found numerous rare and important artifacts, some dating back to the Second Temple period, buried deep beneath the Schneller compound in Jerusalem, which had previously served as a orphanage and later an Israeli army base.

The Schneller compound first served as an orphanage in the 1800's, and then as an occupation area for German soldiers during World Wars I and II. It later became a base for the Israel Defense Forces.

"We were astonished and surprised by the remains we found here," Amit Re'em with the Israel Antiquities Authority said in a statement this week, according to The Blaze.

Re'em added that the discoveries serve as evidence of Jerusalem's rich archaeological history.

"This is the magic of Jerusalem. Everything is layers upon layers in one place," the archaeologist said.

According to Fox News, excavators have made fascinating discoveries at the compound after they were ordered to do a dig before construction on residential housing in the area could begin.

One the most interesting discoveries includes a winery complete with mosaics, storage rooms, and grape presses. Archaeologists have dated the winery back 1,600 years.

A bathhouse was also discovered, complete with an internal heating system, as well as a Jewish settlement dating back to 63 B.C.

The Israel Antiquities Authority said in a statement that at the winery's center, there "is a pit in which a press screw was anchored that aided in extracting the maximum amount of must from the grapes."

"Eight cells were installed around the pressing surface. These were used for storing the grapes, and possibly also for blending the must with other ingredients, thereby producing different flavors of wine," the statement added.

According to the Daily Mail, Re'em added that the bathhouse discovered at the site proves the area was inhabited during the Second Temple Period.

"Near the bathhouse we found a pit - maybe a ritual bath [Mikye] from the Second Temple Period full of ceramic and glass vessels," Re'em said. "Everything is evidence that nearly 2000 years ago the Romans arrived in Jerusalem and after the destruction of the city in 70AD, the soldiers occupied this house and we find archaeological evidence from this period."

Alex Wiegmann, the excavation director overseeing the Schneller compound dig, said in a statement that "Once again, Jerusalem demonstrates that wherever one turns over a stone, ancient artifacts will be found related to the city's glorious past."

"The archaeological finds discovered here help paint a living, vibrant and dynamic picture of Jerusalem as it was in ancient times up until the modern era," Wiegmann added.

Jerusalem has long been a rich source for archaeological history. Earlier this month, the Israel Antiquities Authority confirmed that it had excavated a 7,000-year-old settlement in Jerusalem dating back to the Copper Age.

Along with discovering two houses at this site, archaeologists also discovered tools for harvesting grain, as well as red beads likely used for trade or jewelry. Archaeologists Dig up Fabrics Dating Back to Kings David and Solomon

Archaeologists Dig up Fabrics Dating Back to Kings David and Solomon
The excavation, carried out in southern Israel at the ancient copper mines of Timna — believed by many to be the site of King Solomon’s mines — took place in late January and February. Archaeologists Discover Ancient Hebrew Slab Near Town Where Jesus Drove Out Demons
Historians have long believed that Kursi was inhabited either by Jews or early Christians, and the discovery, supervised by Prof. Michal Artzi of Haifa University and Dr. Haim Cohen with the Israel Antiquities Authority and the Israel Nature and Parks Authority, seems to confirm those ideas. Ancient Temple Mount "Warning" Stone is "Closest Thing We Have to the Temple"
Carved in bold Greek letters, 2,000-year-old Herodian inscription marked off the section of Jerusalem’s most sacred site where gentiles couldn’t go — and shows they were welcome elsewhere in holy area
Comments
×