“Learn to See Each Other” 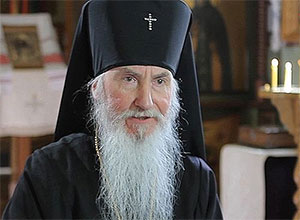 —Vladyka Mark, are Christians today prepared to assume the traditions of the ancient holy fathers to the ultimate degree, by manifesting the Word of the Gospel in their own lives?

—Everything is accessible. The main thing is to desire to. If the heart wishes it, the body will be prepared for asceticism. Reading Holy Scripture today is more important than breathing. We must exploit that which the Lord revealed through the Holy Fathers. Everything necessary has already been said. I may not ride on a donkey today, I flew to Moscow, but that does not mean that I must differ in spirit from those who did indeed travel in their day on a donkey.

Temptations are the same today as they were for thousands of years. When the radio was invented, everyone thought: that’s it, the end has come. And now we have the internet, new forms of communication. They can be taken advantage of to serve one’s neighbor for the sake of Christ, but they can also be used to gratify our passions. Just like a light switch: it can be used to illuminate a room, but also to throw it into darkness. We must strive to take everything seriously that we read in the books of the Holy Fathers and hear during divine services, and mostly what is revealed to us. Many people today seem to walk around with their eyes closed. They see nothing. This is probably a remnant of the Soviet regime.

—Have people ceased to see each other? That is the image of Hell: “When you pray for us, we are consoled, for then we can see each other,” said the skull of a dead warlock to Abba Macarius, illuminating the main torment of Hell-not seeing each other.

—This is a great peril, when people become accustomed to live like this. Twenty years ago we didn’t see this. This self-isolation is especially seen in today’s parishes. The new mood of today’s generation of Christians, who cultivate their own self, self-centeredness and egotism. This hinders real unity. That is why we must do everything we can to heal this rift.

—There was always only one Church. We were separated administratively, but not spiritually. We overcame this administrative division, thank God. But it is important to note that we were always united in Christ. We cannot speak of division within the Church. Church unity cannot be violated by anything but schism or heresy. We had no such division, otherwise we could not have reconciled.

—How is unity cultivated on the parish level?

—We must spend more time communing with one another. For instance, in my cathedral [Holy New Martyrs and Confessors of Russia and St. Nicholas in Munich-ed.] every Sunday after Liturgy we have a common trapeza luncheon. Sometimes a bishop speaks, sometimes a priest. The parishioners ask questions, we discuss current affairs. This is very important—a living community, so that they learn to see and hear each other, forming a community, dispersing conflicts.

Unity is born as a result of internal efforts over one’s self among all the parishioners. People gradually develop a desire to commune with others if they try to fulfill the commandment of the Gospel: let him deny himself (Matthew 16:24 ). This isn’t easy. It takes a great deal of concerted effort. Unity cannot be imposed from without, it is born within. Not by itself, but by the experience of prayer and participation in the Mysteries. We are all members of One Body. When we commune from the One Chalice, we unite. This unity in Christ is granted to us and must be manifested in life, for this each person must apply his own effort. This is a daily communal task, but the variety of its fruits and forms arises from the Mysteries.

—Can the “leaven” of the unity attained within the Church spread to society at large?

—It often happens today that children attend Sunday school, but whatever they learn and bring home is if not met with hostility, then at least finds no support from their parents. But in those places where priests hold discussions about faith with adults, the entire parish is strengthened, families become stronger.

There was one particular instance I recall: a father would bring his two daughters to Sunday school, he would “hand them over” at the front door without even setting foot inside, and spent the next two hours wandering around outside the church. Finally, the priest had it with him and asked “Were you baptized?” “Yes.” “Then why don’t you enter the church?” “I am a professor, but I don’t know anything about the Church. And I am afraid.” So a first discussion was organized at the professor’s home with a few other adults, then such meetings were held at the homes of other parents… Now this professor is a priest in our diocese! He still teaches at university, but was ordained and now serves in a new way.

—How is one to find the path to salvation?

—Pray. When you pray, everything becomes clear. Also, participate in the Mysteries. Then what you are in need of will be revealed to you; the Lord Himself will point you on the right path. Pastoral care is also important. Sometimes you simply have to take somebody by the hand and take them to church. Many people sympathize with believers, believe in God in their own way and don’t reject the Church. Some even enroll their children in Sunday school, but are afraid to take the first step towards the parish community. The Soviet regime during the decades of atheist propaganda was able to achieve something. We, pastors and parishioners, must have a flexible viewpoint in order to resolve these problems correctly.

—I am not sure how much of a problem this is in the Russian Church Abroad, but in today’s Russia, missionary and social work is criticized for many things: for melding the Church and state to turning towards Catholicism. Monasteries are especially criticized, for they are supposed to be images of the Kingdom of Heaven on earth.

—I have no idea why we are criticized for tending towards Catholicism. If we only do social work, maybe we will drift away from Orthodox Christianity. The approach is important, the intention with which each person serves his neighbor. In my opinion, this work is even more important than the external labors that the holy ascetics allowed themselves to perform, when, for example, they wove baskets and sold them. They wove baskets to feed themselves, while today, monks earn money to feed others.

For instance, Sretensky Monastery in Moscow has a hostel which houses some 100 children. Near the city of Ryazan, they also have an agricultural concern. All around them is abandonment, drunkenness. But at the monastery’s farm, the wives of these drunkards have found employment, life is returning to normal. The monastery served to lift this community out of desperation, from extinction. This is of great social benefit. Some of the income the monastery produces for itself, for instance, from publishing, is directed towards supporting the orphans.

One must find a balance between liturgical and prayerful Christian life, especially for monastics, and external activity. Everyone has his own measure. You can develop it by constantly reviewing, assessing your positions, think every evening about what you did wrong, and repent and correct yourself.

The beauty of Orthodox Christianity is that our monastic and parish ways of life do not follow a pattern. We don’t have a Pope of Rome making decrees. The Lord Himself inspires us. And, as we pay heed to Divine inspiration all together, we each transform our lives in our own way, in view of our own circumstances and opportunities.

—What is the mission of women in Church-wide service?

—A woman must always emulate the Mother of God. To stand peaceably and quietly before the Lord, to labor calmly. The Russian Orthodox Church was defended during the years of persecution by old women. And in recent years, it was women who introduced particular vigor and support for the rebirth of the Church in Russia. The seeds of a great deal of wickedness have been planted in the effort to equalize the sexes.

It was a woman who was elevated in society before 1917. On March 2, we honor the “Reigning” Icon of the Mother of God, revealed in 1917, when the Russian nation was deprived of an earthly kingdom. As people who share the Body of Christ, we bear responsibility not only for the historical but the mystical sins of those who handed over the Tsar and his family to execution, and Russia to devastation. In the end, it was apostasy, which led to this evil.

—Yes, without a doubt.

—The appearance of the “Reigning” Icon was seen as the Queen of Heaven Herself assuming the image of royal power and elevating it above the earth, pointing to the path of the restoration of a kingdom, as a desire first of all for the Kingdom of Heaven. From this come the many tribulations (Acts 14:22) which followed 1917-1918, some of which continue to this day.

– We bear the responsibility for these sins and must purify our hearts through repentance. But the fact that Russia, once doomed, survived the Soviet yoke, and that the Russian Orthodox Church still exists, is a miracle. Khrushchev swore to exhibit the last priest on television. Atheists tried their best to destroy the Church. It is sad that those very people are still among you today. They did not repent, and have no intention of doing so. If only the Lord brings them in His own way toward repentance. The German Diocese celebrates the 35th anniversary of the episcopal consecration of His Eminence Archbishop Mark of Berlin and Germany
The calling of hierarch and a monk in the truest sense of the word, are perfectly united in this one individual. It brought us great joy that His Eminence decided to prayerfully mark the occasion of the anniversary of the 35th anniversary of his consecration in the Convent of St Elizabeth in Buchendorf, Germany. Many admirers and spiritual children of Vladyka Mark came on this Sunday, November 29, 2015, to join in prayer. All wished to welcome him for his greeting at Liturgy, scheduled for 4 am. Monasticism and the Church
Address of Abbot Schema-Archimandrite Sergius of St. Tikhon's Monastery to the 18th OCA All-American Council

Monasticism and the Church
Address of Abbot Schema-Archimandrite Sergius of St. Tikhon's Monastery to the 18th OCA All-American Council
Archimandrite Sergius (Bowyer)
We, as members of Christ’s body, can and must support the building and growth of monasteries and monastic vocations. By so doing, we invest in the well-being and preservation of the Church as well as in the “churching” of America. Through the monasteries, organic Orthodox life will grow and flourish, and acting like a catalyst, it will empower and inspire local parishioners to give more of their own hearts and lives to God and to prayer. The power that emanates from a monastery is not only real and tangible, it is intensely powerful, life-creating and life-changing. Archbishop Mark of Berlin and Germany Speaks in Munich On Leo Tolstoy and His Religious Views
On October 26, 2010, His Eminence Archbishop Mark of Berlin and Germany lectured at MIR Russian Cultural Center in Munich on the topic “Leo Tolstoy and Religion,” in which he gave a sharp critique of the religious view of the great Russia author.
Comments
×