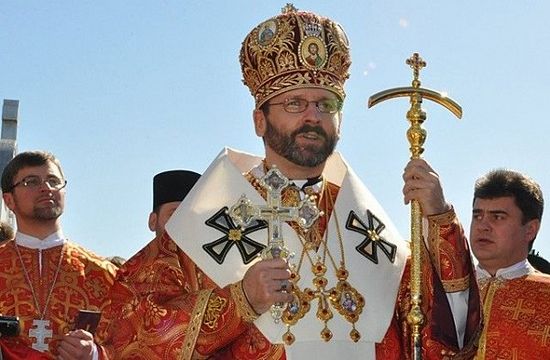 The Moscow Patriarchate has stated that profound differences persist in relations with the Holy See.

"Despite the understanding reached on many vital problems of modernity, profound differences remain between Orthodox and Catholic Christians, in particular in their views on our common history full of tragic events," the Moscow Patriarchate's Department for External Church Relations head Metropolitan Hilarion of Volokolamsk said in an interview with Interfax-Religion.

The Ukrainian Greek Catholic Church (Uniates) has remained a stumbling block in Orthodox-Catholic dialogue, he said. "This block again and again ruins attempts to establish dialogue, to bolster mutual understanding and to bring our positions together. Events of the recent past - the destruction of three Orthodox dioceses by Uniates in western Ukraine in the early 1990s and the seizure of several hundred churches - and of the distant past prove this," he said.

Actions of Ukrainian Uniates have remained the main problem between the Moscow Patriarchate and the Holy See. The issue concerns the destruction of three Orthodox dioceses by Uniates in western Ukraine in the late 1980s - early 1990s, the relocation of the center of the Ukrainian Greek Catholic Church from Lvov to Kiev, its desire to attain patriarchate status, the proliferation of Uniates' mission to traditionally Orthodox lands of eastern and southern Ukraine, and Uniates' support of schismatics. This is accompanied by insults of the Ukrainian Greek Catholic Church against Russia and the Russian Orthodox Church after the beginning of the Maidan.

The patriarch of Moscow and the pope met for the first time in history on February 12. The meeting had been prepared in secrecy for two years. The issue of holding such a meeting was on the Orthodox-Catholic agenda for about 20 years. Patriarch Kirill and Pope Francis signed a joint declaration at the meeting in which they in particular stated that "it is today clear that the past method of 'uniatism', understood as the union of one community to the other, separating it from its Church, is not the way to re-establish unity." They also called on Orthodox Christians and Uniates to reconcile and respect each other. Statement by DECR Communication Service on the Recent Statements of Uniate Bishop Sviatoslav Shevchuk
Like many other speeches of the hierarch, this interview is imbued with aggression against the Russian Orthodox Church and contains attacks on the canonical Ukrainian Orthodox Church, as well as politicized opinions on the tragedy unfolding in Ukraine today and insults to the Patriarch of Moscow and All Russia. John3/15/2016 12:39 pm
John: Again, you show an ignorance of history. The "Orthodox" populace you talk about that silently stood by--well they were mostly in prison camps, executed, or utterly terrorized. Were the communists Orthodox? Please, get real, and stop spouting nonsense.

Johannes Paulus3/14/2016 7:53 pm
John: I don't deny that I've studied much of the history of the Greek Catholics in Ukraine. The Orthodox don't have a monopoly in suffering and dying for what they believe in, they are not the only people willing to be tortured and abused, so I don't at all feel a special sympathy for the Orthodox that I would not give the Ukrainians and Romanians who were mistreated especially by Communists and the silent "Orthodox" populace who supported their regimes.

John3/13/2016 8:41 pm
Johannes Paulus: You obvious don't know the history of the unia in Ukraine--not surprising if you're Catholic. The Catholic Church wouldn't want people to know much about that very dark chapter in its history. I have studied it and it is indeed evil. Orthodox people burned alive, hung, tortured, forced to become uniates--that is how the unia came to be in Ukraine. And it goes on today. Orthodox priests beaten up, killed, parishioners threatened--that is how the unia returned to Ukraine. During WWII they were Nazi collaborationists, murderers of Jews and Poles, terrorising their own people. They came to Ukraine with violence and continue in the same vein. Study history before implying that the Russians are at fault. It's too easy to blame the Russians for everything, especially if you don't know a thing about the history of the unia.

Johannes Paulus3/13/2016 12:12 am
Are all these attacks unwarranted? Are the Orthodox such saints, and the Ukrainian Catholics such evil and diabolical spawns of Satan that they just suddenly started attacking Orthodox (influenced by Russians- don't even deny it)for no apparent reason other than they're evil Nazi Catholics?
×