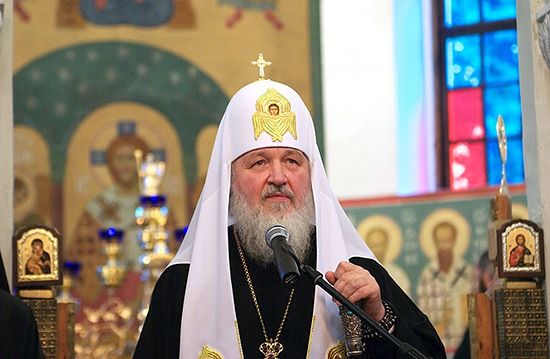 Head of the Russian Orthodox Church Patriarch Kirill denounced as "heresy" those human rights that he said contradicted the Bible, and proclaimed fighting them the goal of his Church, the Interfax news agency reported Sunday.

"We are seeing how efforts are being made in many prosperous countries to establish by law a person's right to any choice, including the most sinful ones, those that contradict God's word, the concept of holiness, the concept of God," Patriarch Kirill said after a Sunday service at Moscow's Christ the Savior Cathedral, Interfax reported.

He did not specify which human rights he found offensive, but called for Russian Orthodox believers to "defend" their faith, the report said.

"Today we are [dealing with] a global heresy of worshipping the human, the new idolatry that removes God from human life," Kirill was quoted as saying. "Nothing like that had even happened on a global scale before. It is specifically at overcoming this present day's heresy, the consequences of which can become apocalyptic, that the Church must aim the force of its protection, its word, its thought."

Russia is a secular state, according to its Constitution, but the Orthodox Church has been gaining increasing prominence and protection by the state in recent years under President Vladimir Putin's rule.

"The spirit and letter of Russian laws are determined by human rights and freedoms, and not by 'God's word,'" Boris Vishnevsky, a St. Petersburg municipal lawmaker from the liberal opposition Yabloko political party, said in a blog on the independent Ekho Moskvy radio station's website. "At least that's what it says in the constitution so far."

The Church "must operate within the limits of the Constitution and the laws," he said. "Because that's how a secular state works, where not everybody is a believer, and not every believer is an Orthodox Christian, but everyone is a citizen."

Patriarchate of Bulgaria: On the Pan-Orthodox Synod and the Appearance of Heresy as a Gift from God so that Orthodoxy can be proclaimed.
Dr. Desislava Panayotova
What helps us correctly confess and live Orthodox ecclesiology: The Orthodox teaching of the Church Schism is the Beginning of Heresy
Archpriest Stephan Pruzhinsky

Schism is the Beginning of Heresy
Christ’s Church, the Orthodox Church, walking the path of love, is always in a condition in which it can resolve one or another intra-ecclesiastical problem through peaceful means and witness the truth to the world.

New Book: Noetic Prayer as the Basis of Mission and the Struggle Against Heresy from Uncut Mountain Press
"This book is required reading for every Orthodox missionary, or, rather, every Orthodox Christian, for there is no Christian who does not seek to be made whole and bring wholeness and spiritual health to his neighbor."
Comments

Wesley Mcgranor1/20/2022 5:54 pm
Pardon me, I meant that I am not a Roman Catholic and your disposition and examples are unheard of popular. As of I think 2008~9 the papacy has made social injustice a sin. I am and all ways have been a Protestant Fundamentalist and our history is rife with ways to undermine constitutions and without natural law.

Vit Machalek3/24/2016 4:59 pm
Not only secularists... "How many winds of doctrine have we known in recent decades, how many ideological currents, how many ways of thinking. The small boat of the thought of many Christians has often been tossed about by these waves - flung from one extreme to another: from Marxism to liberalism, even to libertinism; from collectivism to radical individualism; from atheism to a vague religious mysticism; from agnosticism to syncretism and so forth. Every day new sects spring up, and what St Paul says about human deception and the trickery that strives to entice people into error (cf. Eph 4: 14) comes true." (Joseph Ratzinger)

ChiRho3/23/2016 6:07 pm
The definition of human rights changes with the wind these days. Secularists are tossed about like waves in the ocean, following trends and an ever-changing culture. God does not change. Glory to Orthodoxy!
×