Everyone loves a winner

Everyone loves a winner.

We celebrate athletes that run and jump, throw and catch better and faster than anyone else. We marvel at entrepreneurs who start companies that earn billions of dollars. We idolize the actors and musicians who are at the top of their craft. Everyone loves a winner.

We live in a culture that worships winners. It’s all about winning elections, winning arguments, winning friends and influencing people. Winning may be our greatest obsession. What does it take to win? What strategy will give us an advantage over our opponent? What kind of training and preparation will give us the edge that we need to come out on top? We work and plan and scheme to figure out a way to win, and then we dream about the glory that will be ours. 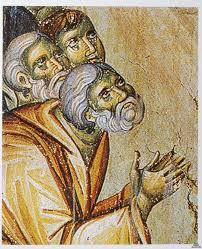 Christ appearing to the Disciples on a mountain in Galilee (detail). Church of the Protaton, Mt. Athos.
This is probably what Peter was thinking when he and the disciples entered Caesarea Philippi with Jesus. It was there, in that city with its famous pagan temple, that Jesus asked the disciples, “Who do men say that I am?” The disciples said, “Some people think that you are John the Baptist, some say that you are Elijah, and others say that you are one of the prophets.” But then, Peter, going for the win, says, “You are the Christ, God’s anointed, the messiah!” Peter does not think of Jesus as some member of the supporting cast; he says that Jesus is the Christ, the one that God sent to deliver His people. But Jesus immediately commands them not to tell anyone about him. Isn’t that strange? Why does Jesus tell them not to say anything about him? It is because Peter was wrong.

Jesus must have known exactly what Peter was thinking.

And this is why Jesus immediately starts telling his disciples that the Christ, the Son of Man, must suffer many things, and be rejected by the elders and chief priests and scribes and be killed, and after three days be raised.

Yes, Jesus is the Christ, but he’s a different kind of Christ than the one Peter was looking for. After Jesus spells out very plainly to the disciples that the Christ is not going to bring about victory on human terms, Jesus began to teach the disciples that the Son of man must suffer many things, that he would be rejected by the elders and the chief priests and the scribes, that he would be killed, and after three days rise again. Jesus told them all of this in plain unequivocal language. But then Peter took him, and began to rebuke him. Peter takes Jesus aside and rebukes him. Peter actually rebukes Jesus.

In other words, Peter speaks to Jesus like some sort of campaign manager, “Lord, what are you talking about? Rejection, suffering, being killed…are you kidding me?!? This is not what God’s anointed is supposed to do, and this is certainly NOT what you are going to do!”

“Lord, make sure that I get a big payoff.”

“Lord, make sure that my plans work out this time.”

“Lord, do exactly what I want, so that I can win.” 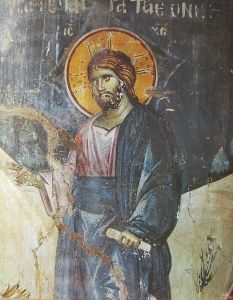 Christ appearing to the Disciples on a mountain in Galilee (detail). Church of the Protaton, Mt. Athos.
Sometimes we may think that God has strayed from the playbook, things aren’t turning out as we planned so maybe we need to give God a reminder about what God is supposed to do. Peter definitely thought that he had to tell Jesus what to do in order to achieve an earthly victory. That’s why Jesus says to Peter, “Get behind me Satan. For you are not on the side of God but on the side of men.” Jesus tells Peter and us that winning, according to the rules of this world, is a false victory. Christ says “Whoever would save his life would lose it.” An earthly victory is a false victory because, for every army that marches home in victory, there are scores of widows and orphans who weep in the ashes and rubble of defeat. For every billionaire entrepreneur, there are millions of people living in poverty. For everyone who wins an argument, there is someone who is left in anger and resentment. And the bottom line is thatwe don’t always win. More often than not, when we lose, or when our plans don’t work out, in our desperation we can so easily turn against God and turn against the people we love.

This is exactly what happened to Peter when he denied Jesus on the night before the Crucifixion. In the cold, darkness of that courtyard outside of the house of the high priest, Peter watched and waited, hoping that somehow his plans and schemes for the messiah could still be salvaged. But when the bystanders said, “Hey, aren’t you one of Jesus’ friends; Yeah, you are one of Jesus’ disciples; You are a Galilean, you must be on of Jesus’ followers.” Three times, Peter denied that he knew Jesus, invoking a curse and swearing, “I do not know this man Jesus.”

And when Peter realized what he had done, he broke down and wept. Everything had gone wrong, and in his desperation, he had denied and abandoned Jesus. Peter’s life had become a living hell. To worship the false-victory of this world is to live in hell. Perhaps in that moment, Peter remembered Jesus’ words, “Get behind me Satan.” But in that moment, maybe Peter also remembered what Jesus right after that. Jesus says to His disciples, “Whoever desires to come after me, let him deny himself and take up his cross and follow me.” These are the same words that Jesus speaks to us on this third Sunday of Great Lent, the Sunday of the Cross. 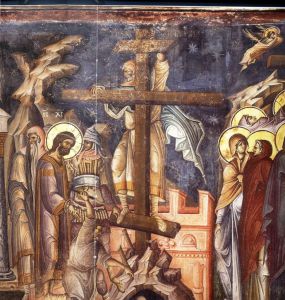 The preparation of the Crucifixion. Monastery of Vatopedi, Mt. Athos.
Jesus does not say, “whoever desires to come after me should go out and get himself crucified.” Jesus specifically says, “take up the cross and follow me”—which is the complete opposite of everything we know about winning. To carry your cross is to experience the absolute shame of defeat. It is like the condemned man who is commanded to prepare the noose for his own hanging. It is like the victims in the concentration camp who are forced to dig the pit that will become their own mass grave.

In Jesus’ time, the ritual of forcing a condemned man to carry his cross was murderous mockery. Carrying the cross was part of the bloody Roman propaganda that said, “Behold this man, who disobeyed our commands.

Look at how we crush him and strip him of his last shred of dignity.

Look at how we force him to carry the cross that we will use to execute him.

Look at the power of the Empire, look at how we have won.”

And Jesus Christ, the Incarnate Word of God, submits to the Cross willingly, to show that God’s victory is not the victory of this world. Christ’s death on the Cross is the sign that the power of God is greater than the most hideous power of this world. For in the very midst of the humiliation, and agony of crucifixion, as they nailed his hands and feet to the Cross, Jesus prayed, “Father, forgive them for they know not what they do.”

And at that moment, the world was forever changed. Because the hateful power of this world was defeated by the Love of God.

Jesus’ victory on the Cross is the most unlikely victory that the world has ever seen. Because in the Resurrection, Jesus did not return to take vengeance on the people who betrayed him and murdered him. In the Resurrection, Jesus returned and forgave Peter. And then Jesus sent his disciples out to preach the good news to the very people who had killed him, the gentiles, the Romans. 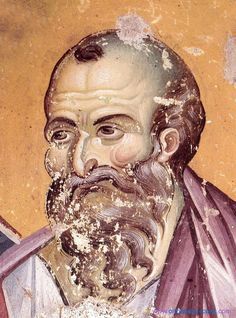 Apostle Paul. Church of the Protaton, Mt. Athos.
We see this so clearly in Acts, when Paul and Silas had been arrested and beaten and thrown into jail. There they are in that dark, dank prison, singing hymns and praising God when all of a sudden there was an earthquake and the doors were opened, and all the chains of the prisoners were loosed. When the jailer woke up, and saw what had happened, he assumed that all of the prisoners had escaped, and in his despair, he was about to kill himself. But Paul cried out, “Don’t harm yourself, we are all here.” In that moment, it would have been so easy for Paul to have said, “Ha, let that jailer get what he deserves.” But instead he saved the man from his despair. The jailer cried out, “What must I do to be saved?” And Paul told him about the love and mercy and power of Jesus, the Crucified Messiah.

This is the victory of the Gospel: those small, bright moments of reconciliation, when people who would otherwise be enemies, turn and embrace one another in the love of Christ. This is what it means to take up the cross and follow Christ.

Paul and Silas, and Peter and all the other disciples took up the Cross and followed Christ. They were given divine courage to endure the same kind of humiliation that Christ endured, and to share the love and mercy of God with everyone.

And today, as we fall down before the Holy Cross, as it is lifted up and we praise it in our hymns and songs, we are strengthened with the same divine courage. We face the evil, and the anger of this world, and we take up our cross and follow Christ, showing mercy and forgiveness to everyone around us, glorifying Jesus Christ. For Jesus’ victory, His victory on the Cross, the victory of God’s love, is our one true and lasting victory. The Cross in Our Life
His Eminence Metropolitan Joseph

The Cross in Our Life
His Eminence Metropolitan Joseph
Many heretics of our time don’t believe in the cross, even if they may call themselves Christians. Some pop stars and actors wear the cross, but by the witness of their lives we can assume that they don’t put much value in the cross except as an empty symbol. Third Sunday of Great Lent: The Cross
Today's Gospel summarizes how we are to live, and why. It tells us about real reality. Not what the world tells us is real, but about how a Christian should live, how a Christian should think, how he should be. Our Lord said, " Whosoever will come after me, let him deny himself, and take up his cross, and follow Me."
Comments
×