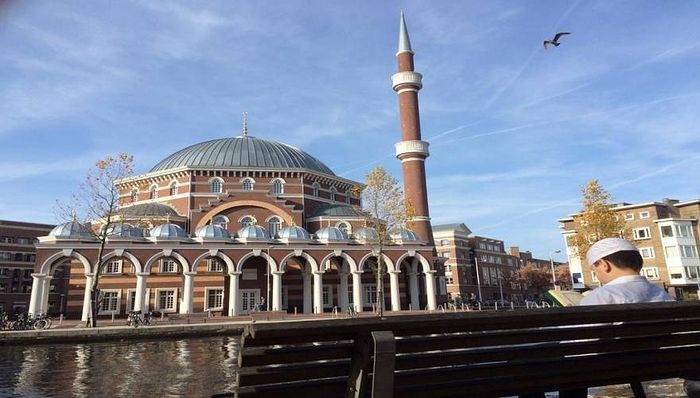 With outrageous activity Turks are advancing in the building and opening of a mosque called "Hagia Sophia" in Amsterdam, which is an exact replica of the sacred symbol of Orthodoxy in Constantinople, reports Romfea.

By these actions Turkey wants to prepare the global community for the realization of the dream of Recep Tayyip Erdogan who promised that he would turn "Hagia Sophia" in Constantinople into a mosque.

The Turks are paying excessive attention to the opening of the new large mosque in Amsterdam (the Netherlands) with the stolen name of "Hagia Sophia."

The Sabah Turkish news agency reports: “The capital of Holland has dreamt for 20 years of opening a mosque named 'Hagia Sophia’ in Amsterdam which will open its doors for believers. The first Friday prayers will be held in the mosque simultaneously with its opening. Turkish President R. T. Erdogan will be present at the opening ceremony during which over 2500 people will be praying.”

The choice of name "Hagia Sophia," which is a Christian one, along with the opening of the mosque by Erdogan symbolizes the next step of the Turkish President who wants to turn the symbol of Orthodoxy and Greek culture into a place of Muslim worship.

Kostis Bastakas4/10/2016 2:11 pm
The most sincere form of flattery is imitation. Christians should be happy that the Muslims recognize the superiority of this masterpiece of Greek medieval architecture over its awkward and gaudy imitation, the blue mosque.

Thomas Johnson Hulbert4/8/2016 8:35 am
Also, if should be known that prior to the construction of this mosque, dozens of major historical churches in the Netherlands, including Amsterdam, have already been converted to mosques. This is because there are no Christians to maintain them and the cities have transferred the churches to other uses, including museums and mosques, to transfer maintenance costs to other parties. I lived in the Netherlands for many years and saw this with my own eyes, even in smaller villages. Orthodox believers world wide are reading Pravolsavie.ru and as a responsible source of media, the journalists and editorial staff need to have more integrity than this sensationalism and fear mongering. The truth of the expansion of Islam into Europe is unpleasant, but requires sober reporting and not hysterical overreaction.

Thomas Johnson Hulbert4/8/2016 8:28 am
While a Mosque in Amsterdam is ridiculous enough and a symbol of the ongoing Muslim occupation of Europe, I am disappointed at the shallow knee jerk reaction by editorial staff of Pravoslavie.ru. Equating a new mosque in Amsterdam with the ancient Hagia Sophia by name only is childish and fear mongering. Using the mosque's existence as proof that Erdogan is returning the original Hagia Sophia in Constantinople to a functioning mosque is a logical fallacy. There are plenty of reasons to be upset about this event, but an emotional display of hyperbole is not Orthodox or good journalism. Get it together.
×