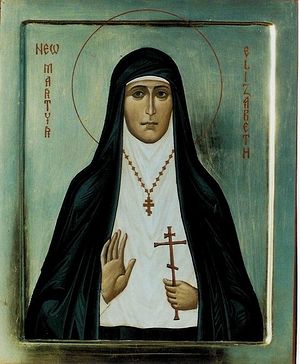 In November a group of English Orthodox pilgrims made their way to Russia seeking to learn more about and grow closer to their parish patron the Grand Duchess and New Martyr St. Elizabeth. In addition to Moscow’s many spiritual treasures they were able to visit Neskuchnii Sad where the Grand Duchess had a house with her husband Grand Duke Sergei, as well as the Martha and Mary Convent founded by the righteous martyr.

Inspired by their pilgrimage, they returned home with a great veneration for St. Elizabeth and founded the Grand Duchess Elizabeth Romanov Society. As Maria Harwood, who co-founded the society with her husband John, writes: “Definitely we were inspired by our pilgrimage. We became a group of people bound by our love of the saint and by enthusiasm to spread knowledge about her life and deeds in the country which greatly influenced her personality.”

John and Maria, both involved in archival research into St. Elizabeth’s life, together with Paul Oxborrow, society secretary, and Alexander Groves, the treasurer, widely promoted the ideas of the society and were able to attract about eighty members and friends and to organize an inaugural event at Eastwell Manor in Kent, the home of her relatives Prince Alfred of Edinburgh and her sister-in-law Grand Duchess Maria Alexandronva, visited by “Ella” in 1884, just a few months before going to Russia for her wedding. Maria noted that the group’s “recent discovery of this place gave us an exciting opportunity to start our Society with the Grand Duchess's ‘presence.’”

The first meeting of our new Society was held in this historic building, now a Hotel, in which the Grand Duchess Elizabeth visited members of the British Royal Family during the time when it was a royal residence. It proved to be a most suitable venue when about sixty members and supporters gathered to inaugurate the Society dedicated to spreading knowledge of the life, values and faith of the Grand Duchess Elizabeth, Queen Victoria’s granddaughter, a remarkable benefactor of the poor and a Martyr of the twentieth century.

The evening began with the playing of selected parts of a film of the Grand Duchess' life “White Angel of Moscow” made in Russia in 2009 with an English commentary. This gave an introduction to her story which was of interest both to those who knew her well and to those who knew little of her story. This was followed by a fascinating lecture from the noted historian and biographer Charlotte Zeepvat on the life of the Grand Duke Sergei and Elizabeth in Moscow when he was acting as Governor-General of Moscow, and up until his tragic death at the hand of assassins in 1905.

The story of Elizabeth's life was brought right up to its conclusion by the dramatic reading of a moving letter by her sister Victoria written from Port Said where she met Elizabeth's coffin on its way to the final resting place in Jerusalem in 1920. This brought home how deeply she was loved and recalled the episodes in the film covering her decision to stay in Russia with her sisters and their mission to the poor; a decision which led to her brutal death, seen now as the martyrdom of a faithful and virtuous soul.

The evening concluded with a concert of Russian music, generously provided by various friends and supporters. Alexey Knupffer overcame the limitations of a decidedly inferior piano with some of his own compositions and music from Rachmaninov. Tenor Gary Marriott delighted us with two operatic songs, and soprano Lilia Moshtael, accompanied by Nadia Giliova, gave us a moving recital of romantic songs.

We are extremely grateful to everyone who contributed to the evening's entertainment, which was very well received by the audience.

We would also like to thank all those who attended this event, many of whom were very generous in their offerings in support of the future work of the Society. Projects including a travelling exhibition of artifacts from Moscow and elsewhere and a one person show based on the Empress Maria's recollections of Elizabeth while in exile are to be planned over the coming weeks.

The society has a wide range of interests, touching on all areas of the Grand Duchess’ life, including Russian and world history during her lifetime—the First World War, the Russian Revolution, etc; cultural topics such as music, art, drama, architecture, and literature; history, liturgy, theology, etc. of the Orthodox Church; the lives of not only the Grand Duchess but also of her husband Grand Duke Sergei Alexandrovich, the wider Romanov family, and other royal houses of Europe; and charitable works in the vein of St. Elizabeth.

For more information on the society and its works, visit their Facebook page or contact secretary Paul Oxborrow at pauloxborrow@zen.co.uk, treasurer Alexander Groves at stephen.groves@zen.co.uk, or chairm Maria Harwood at nd1523@hotmail.com, and see the society's brochure below: Holy Hieromartyr Benjamin of Petrograd and Those With Him

Holy Hieromartyr Benjamin of Petrograd and Those With Him
Commemorated July 31/August 14
Today the Russian Orthodox Church celebrates the memory of one of the early stars in the pleiades of new martyrs and confessors of the Communist yoke, Metropolitan Benjamin (Kazansky) of Petrograd and Gdovsk, together with Archimandrite Sergei, Yuri, and John.
Comments
×