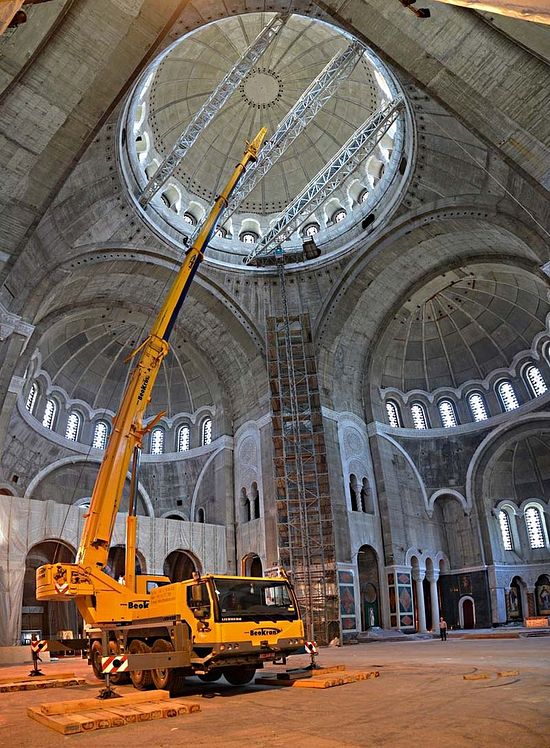 By the decision of the Holy Synod of Bishops, the Serbian Orthodox Church has begun work to adjust the backing surface on which mosaics are to be placed, in Belgrade's St. Sava Cathedral.

The year 2019 is especially important for our people and for the Saint Sava Cathedral, as the 800th anniversary of the autocephaly of the Serbian Church will be celebrated then. According to the Project task of the Holy Synod of Bishops for artistic equipping of the mosaic compositions in the Saint Sava Cathedral, the goal is to complete the first phase of mosaics for internal decoration of the Cathedral, which consists of:

The first and second units of mosaic work in Saint Sava Cathedral will be, with the help of the Russian Federation and the Russian people, completed by 2019 under the custody of the Russian Federal Agency for affairs of the Commonwealth of Independent States (approved by the Russian Government), Compatriots Living Abroad and International Humanitarian Cooperation. Serbia Celebrates Sveti Sava
Saint Sava, known as the Illuminator, was a Serbian prince and Orthodox monk, the first Archbishop of the autocephalous Serbian Church, the founder of Serbian law, and a diplomat. 'The Earth Cannot Imprison Him'—St. Sava of Serbia
"In creating the Serbian Church, he created the Serbian state and Serbian culture along with it. He brought peace to all the Balkan peoples, working for the good of all, for which he was venerated and loved by all on the Balkan peninsular. He gave a Christian soul to the people of Serbia, which survived the fall of the Serbian state." Mayor of Chicago Proclaims Saint Sava Academy Day
The Mayor’s proclamation also noted that Saint Sava Academy is “the only full-time elementary school in Chicago offering dual language education in both Serbian and Russian languages,” “offers a safe community where students are able to express their culture and religious beliefs,” and “sustains an Orthodox faith-based education that provides students a strong spiritual compass both inside and outside the classroom.”
Comments
×