Knocking Down the Gates of Hell 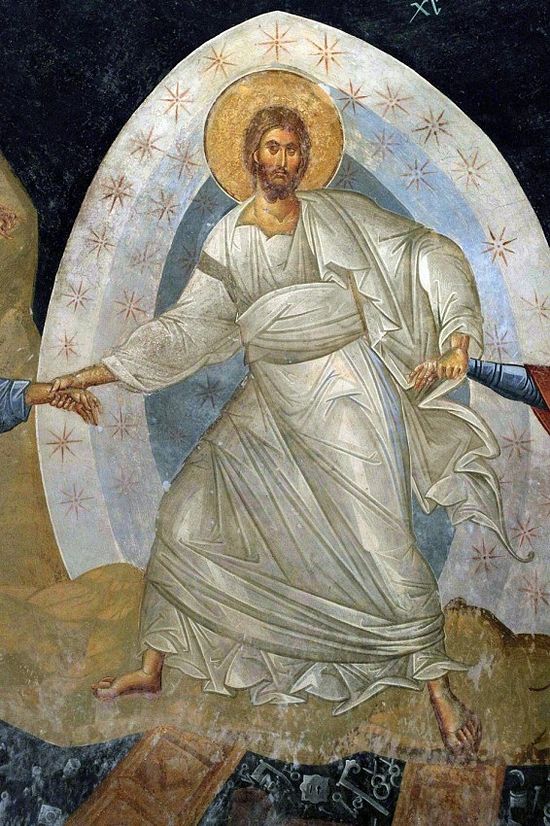 The Swedish Lutheran theologian, Gustav Aulen, published a seminal work on types of atonement theory in 1930 (Christus Victor). Though time and critique have suggested many subtler treatments of the question, no one has really improved on his insight. Especially valuable was description of the “Classic View” of the atonement. This imagery, very dominant in the writings of the early Fathers and in the liturgical life of the Eastern Church, focused on the atonement as an act of invasion, smashing of gates and bonds, and the setting free of those bound in hell. Aulen clearly preferred this imagery and is greatly responsible for its growing popularity in some segments of Western Christendom.

The language was obscured in the West by the later popularity of propitiatory suffering (and the various theories surrounding it). Aulen noted, however, that Luther tended to prefer this older imagery. I had opportunity to do a research paper in grad school on the topic. I surveyed all of the hundreds of hymns written by Luther and analyzed them for their atonement theology. All but about two used the Classic View. Aulen was right.

In Orthodoxy, this imagery is the coin of the realm in the hymns surrounding Pascha. All of Holy Week is predicated on the notion of Christ descent into hell and radical actions of destroying death and setting free those held in captivity. St. John Chrysostom’s great Paschal Homily, read in every Orthodox Church on the night of Pascha, is an “alley, alley, in come free!” of salvation.

I have written on this topic before. I thought, however, to share some of the verses from the hymns for the Matins of Holy Saturday. Their language is a pure expression of the spirit of Orthodox Pascha and the atonement teaching of the Fathers.

Hell, who had filled all men with fear,
Trembled at the sight of Thee,
And in haste he yielded up his prisoners,
O Immortal Sun of Glory

Thou hast destroyed the palaces of hell by Thy Burial, O Christ.
Thou hast trampled death down by thy death, O Lord,
And redeemed earth’s children from corruption.

Though thou art buried in a grave, O Christ,
Though Thou goest down to hell, O Savior,
Thou hast stripped hell naked, emptying its graves.

Death seized Thee, O Jesus,
And was strangled in Thy trap.
He’’s gates were smashed, the fallen were set free,
And carried from beneath the earth on high.

O Savior, death’s corruption
Could not touch thy holy flesh.
Thou hast bound the ancient murdered of man,
And restored all the dead to new life.

Thou didst will, O Savior,
To go beneath the earth.
Thou didst free death’s fallen captives from their chains,
Leading them from earth to heaven.

In the earth’s dark bosom
The Grain of Wheat is laid.
By its death, it shall bring forth abundant fruit:
Adam’s sons, freed from the chains of death.

Wishing to save Adam,
Thou didst come down to earth.
Not finding him on earth, O Master,
Thou didst descend to Hades seeking him.

O my Life, my Savior,
Dwelling with the dead in death,
Thou hast destroyed the iron bars of hell,
And hast risen from corruption.

These examples could be multiplied many times over. The section of Matins from which these are taken has over 100 verses! Orthodox Holy Week and Pascha has many ways of acting out this theology. Lights go up at the hint of victory, particularly as we sing the Song of Moses celebrating the drowning of Pharaoh’s army. In some parishes, bay leaves are tossed in the air by the priest in a fairly violent and joyous celebration of the victory. In yet others, at certain points during the Vesperal Liturgy of Pascha, loud noises such as the banging of pots and pans are heard as the liturgy describes the smashing of hell’s gates. There’s is one village in Greece where two parishes have developed a custom of firing rocker fireworks at each other in the Paschal celebration.

Such antics completely puzzle the non-Orthodox and even seem comical. The Paschal celebration in Orthodoxy is far more akin to the wild street scenes in American cities when the end of World War II was announced – and for the same reason!

All of this also explains why many Orthodox are very reluctant to engage in “who’s going to hell” discussions with other Christians (though some Orthodox sadly seem to relish the topic). The services of Holy Week, as illustrated in these verses, are filled with references to hell. I daresay that no services elsewhere in all of Christendom make such frequent mention of hell. But the language is just as illustrated above. It’s all about smashing, destruction and freedom. It is the grammar of Pascha. It should be the grammar of Christianity itself.

Hell is real. Jesus has come to smash it. It is the Lord’s Pascha. It is time to sing and dance. Is Hell Real?
Fr. Stephen Freeman
On one of the roads leading into my small city a billboard has recently appeared. It is part of a larger campaign by a nationally known evangelist who is to have a revival in Knoxville. The sign is simple. In very large bright yellow letters (all caps), the sign says: HELL IS REAL. In small letters beneath it, in white, that can be read as your car nears the sign is the statement: so is heaven. Holy Saturday and the Harrowing of Hell
Robert Arakaki

Holy Saturday and the Harrowing of Hell
Robert Arakaki
Today Hades cried out groaning: “Would that I had not received the One born of Mary; for He came upon me and loosed my power. He shattered the gates of brass; the souls, which I held captive of old, as God He raised up.” Glory O Lord to Your Cross and Your Resurrection.
Comments

Rdr Andreas Moran5/3/2016 11:24 pm
I would respectfully suggest that greater precision in terminology is employed in this area. 'Hell' is a word of Nordic origin which lacks clarity of meaning in this context and it is one of the few failings of the KJV Bible that it uses this word. Nowhere do the services of Holy Week and Pascha refer to 'hell'; rather, the Greek texts use the word 'hades' which is the Greek rendering of the Hebrew 'Sheol'. Our service texts describe the despoiling of hades by Christ's descent there on Holy Saturday so that hades no longer exists. What English usage terms 'hell' is called 'Gehenna' in the New Testament. What we have since that first Holy Saturday is Gehenna and Paradise, words used by our Lord Himself. These are commonly termed in English 'hell' and 'heaven' respectively, and it is best to limit these terms accordingly.
×