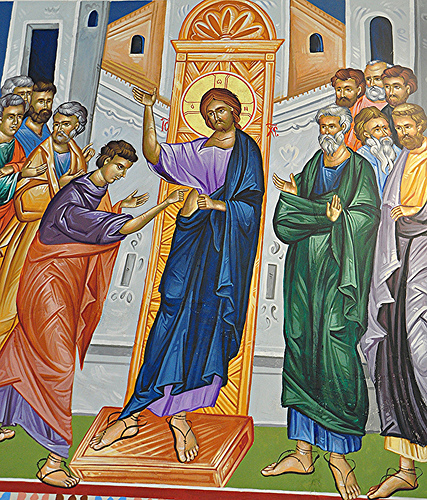 The first Sunday after Pascha is dedicated to the memory of the Apostle Thomas and his particular reaction to the Gospel of the resurrection of Christ. It is a continuation of the Gospel lesson which was read at the Vespers of Pascha Sunday: John 20:19-31. The Gospel lesson for this Sunday is simply continuing a celebration of the resurrection of Jesus Christ by dealing with the very real reactions of Christ’s own disciples to the Good News.

On the evening of that day, the first day of the week, the doors being shut where the disciples were, for fear of the Jews, Jesus came and stood among them and said to them, “Peace be with you.” When he had said this, he showed them his hands and his side. Then the disciples were glad when they saw the Lord. Jesus said to them again, “Peace be with you. As the Father has sent me, even so I send you.” And when he had said this, he breathed on them, and said to them, “Receive the Holy Spirit. If you forgive the sins of any, they are forgiven; if you retain the sins of any, they are retained.” Now Thomas, one of the twelve, called the Twin, was not with them when Jesus came. So the other disciples told him, “We have seen the Lord.” But he said to them, “Unless I see in his hands the print of the nails, and place my   finger in the mark of the nails, and place my hand in his side, I will not believe.” Eight days later, his disciples were again in the house, and Thomas was with them. The doors were shut, but Jesus came and stood among them, and said, “Peace be with you.” Then he said to Thomas, “Put your finger here, and see my hands; and put out your hand, and place it in my side; do not be faithless, but believing.”Thomas answered him, “My Lord and my God!” Jesus said to him, “Have you believed because you have seen me? Blessed are those who have not seen and yet believe.” Now Jesus did many other signs in the presence of the disciples, which are not written in this book; but these are written that you may believe that Jesus is the Christ, the Son of God, and that believing you may have life in his name.

Archbishop Job Getcha gives us some historical background for this Feast.

“The second Sunday of Pascha, i.e., the Sunday following Easter, is dedicated to the encounter of Thomas with the risen Lord. It is also called ‘Antipascha’ or ‘Renewal Sunday’. It concludes the paschal octave, whose particular celebration in Jerusalem in the late fourth century is attested to by Egeria in her journal and by the Armenian Lectionary in the fifth century. In chapter 39 of her journal, Egeria tells us that ‘these feasts of Pascha are celebrated over eight days.’ She specified that, on the day of the octave,

The lucernare [vespers] is celebrated both at the Anastasis and at the Cross, and then all the people, without exception, with hymns escort the bishop to Sion. When they arrive there, they again sing hymns appropriate to the place and day, and the gospel passage is read again describing how, eight days after Pascha, the Lord entered where the disciples were and reproached Thomas for having been doubtful.”     (Archimandrite Job Getcha, The Typikon Decoded, p 239)

While the hymns of the day do mention the blessed doubt of Thomas which led to his fully believing in Jesus as Christ, doubt does not automatically lead to faith. Jesus reproaches Thomas for his faithlessness, but doesn’t reject him.   The 7th Century St. Isaac of Nineveh notes there is a downside to doubt.

“Once someone has doubted God’s care for him, he immediately falls into a myriad of anxieties.” (The Wisdom of St. Isaac of Nineveh, Sebastian P. Brock, p 34)

Peter wept bitterly for his faithless denial of Christ.   Yet doubt does not mean absolute rejection of Christ. It is a normal part of being human. It can be healthy for us, as Thomas demonstrated, but we need to use it to lead us to Christ rather than allowing ourselves to become foolish cynics. We often have to wrestle with our own thoughts on our way to God’s Kingdom. St. Thomas Sunday
Fr. Sergei Sveshnikov
Although from the very early morning on the day of the resurrection the good news of the resurrection was carried throughout creation, and even though angels from heaven (Mark 16:6) and holy myrrhbearers on earth (Luke 24:9) and even the guards at the Sanhedrin (Matthew 28:11) had already told of the miracle, the apostles were still in a state of fear and doubt, hiding behind doors and locks “for the fear of the Jews” (John 20:19).
Comments

Mark Citadel5/9/2016 5:09 pm
I spent so long in doubt that reading this definitely moved me. Doubt is something to overcome, and when this victory is achieved, it is all the sweeter for the struggle.
×