Patriarch calls on Serbs to stay in Kosovo 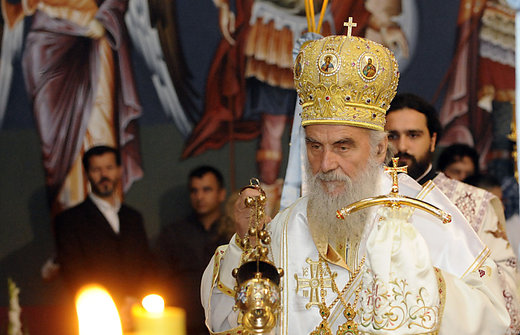 Patriarch Irinej of the Serbian Orthodox Church (SPC) on Sunday called on Kosovo-Metohija Serbs to remain in the province, urging its displaced population to return.

Following a liturgy he served in St George’s Cathedral in Prizren, Kosovo-Metohija, he said that “Kosovo will remain ours if we carry it in our souls.”

The patriarch and bishops also consecrated the renovated building of the Saints Kyrillos And Methodius religious school in Prizren.

We pray to God to save our Patriarchate of Pec, the Visoki Decani and the Gracanica monasteries and many other holy sites that have survived, as well as the walls and ruins of those that have been burned down or razed, in the hope that they will be rebuilt, Irinej said.

The liturgy was attended by many Christian Orthodox worshippers, Kosovo Serb representatives, Serbia’s Justice Minister Nikola Selakovic and the head of the Serbian government Office for Kosovo-Metohija Marko Djuric and his aides.

A regular meeting of the SPC Holy Assembly of Bishops officially began at the Patriarchate of Pec on Saturday and is scheduled to continue in Belgrade on Monday. Patriarch Irinej Urges Former Kosovo Residents To Return
Patriarch Irinej of the Serbian Orthodox Church on Tuesday urged all former residents of Kosovo-Metohija to return to their homes in the province.

Serbs In KiM Are Not Forgotten – SPC Patriarch Irinej
Patriarch of the Serbian Orthodox Church (SPC) Irinej addressed his traditional Christmas epistle to Orthodox believers in Serbia who celebrate the holiday according to the Julian calendar, with special emphasis on the position of Serbs in Kosovo-Metohija (KiM) where suffering and injustice persist.
Comments
×