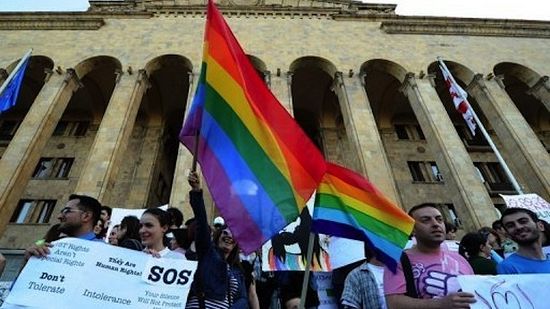 Ten gay rights activitists are being held in custody for defacing a fence at the Georgian Orthodox Patriarchate with graffiti, reports the Associated Press.

The activists face possible charges of vandalism and disobeying police orders after being caught writing "All love is equal" on Church property in the early hours of Tuesday, May 17.

While the republic of Georgia engages the west politically and economically it remains a staunchly conservative nation where the Church and Patriarch Ilia II are trusted by the vast majority of citizens.

Of course the Church maintains Christian understandings of the family and societal values, and Patriarch Ilia is scheduled to speak at this year's conference of the World Congress of Families, which understands the traditional, natural family as the fundamental building block of society, currently underway in Tbilisi. Earlier he stated that he "would pray to God that it may become a display of peace and love, of Christian values and culture."

The patriarch called last year's U.S. Supreme Court ruling on gay marriage a "big mistake," calling on all Georgians to discern between right and wrong. As an Orthodox Christian the patriarch of course does not support violence against any such activists and has in the past called upon the government to provide them with security. Georgian Patriarchate asks to provide security to human rights activist from LGBT community
The statement says that, despite the fact that the Georgian Orthodox Church "condemns and considers this step (let alone the adoption of a law) to be unacceptable, violence and, naturally, manifestations of violence in its gravest form are also unacceptable."