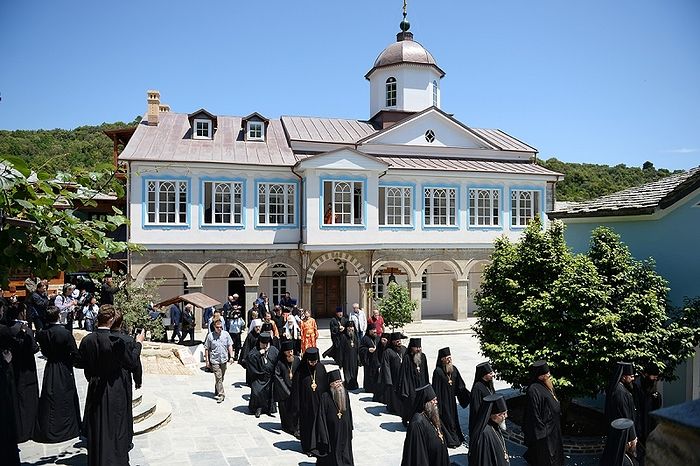 May 28, 2016, after the Divine Liturgy in Old Russikon on Mt. Athos, His Holiness Patriarch Kirill of Moscow and All Russia, accompanied by the delegation of the Russian Orthodox Church, visited the Xilourgou Skete dedicated to the Dormition of the Most Holy Theotokos—historically the first Russian monastery on the Holy Mountain, where restoration work was carried out for the thousand-year anniversary of the Russian presence on Mt. Athos.

His Holiness was met by the spiritual father of St. Panteleimon Monastery Hieromonk Makary, the superior of the skete Hieromonk Symeon, and the brothers of the monastery. 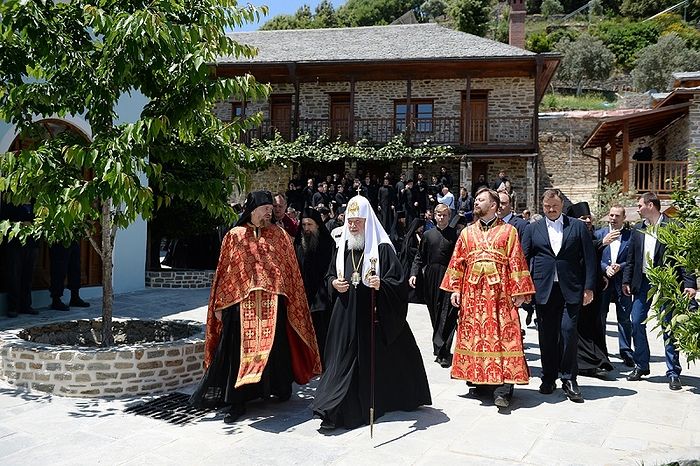 The primate of the Russian Orthodox Church visited the skete’s ancient Dormition Cathedral, and also the Church of Venerable John of Rila.

His Holiness Patriarch Kirill consecrated the Church of the Holy Equals-to-the-Apostles Kirill and Methodius in the brothers’ dormitory, built in 1885, and then led the serving of a Moleben in the newly-consecrated church, reports Patriarchia.ru.

At the end of the service His Holiness addressed those gathered in the church. The primate of the Russian Church gave Xilourgou Skete Eucharistic vessels as a gift. 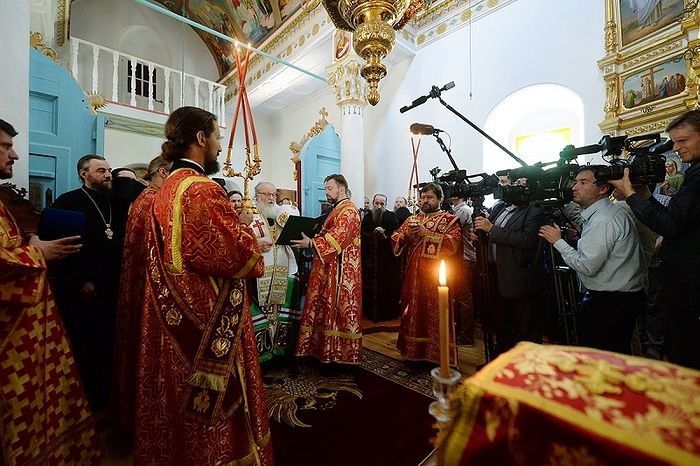 Then His Holiness, accompanied by the skete superior Hieromonk Symeon, surveyed the buildings of the skete.

Xilourgou Skete (“carpenter”), dedicated to the Dormition of the Most Holy Theotokos is the first Russian Monastery on Athos, located on the eastern side of the Holy Mount Athos, an hour’s journey from Karyes. It is associated with the Russian monastery of St. Panteleimon on Mt. Athos.

The skete was founded in the middle of the tenth century. From the beginning of the twelfth century Xilourgou has been referenced as a “Russian” habitation. Particularly, Russian pilgrims to Athos settled in Xilourgou.

In the nineteenth century in the skete, besides the Dormition Cathedral Church, two churches were built, in honor of St. John of Rila and Sts. Kirill and Methodius.

The main relic of the skete is the icon of the Mother of God “Sweet Kissing” (Glykofilousa), gifted to the skete in 1802.

Restoration work was underway in the skete in the past several years, including the Church of Venerable John of Rila in disrepair, the renovation of the brothers’ housing, and the reconstruction of the entrance road. Patriarch Kirill consecrated the restored cathedral of Old Russikon on Mt. Athos
In honor of the celebration the brothers of St. Panteleimon monastery presented the Patriarch a gift of a picture of Old Russikon by the artist V. Nesterenko. For his part, the primate of the Russian Orthodox Church gave the restored monastery an Iveron Icon of the Mother of God. Patriarch Kirill and hierarchs of the Russian Church honored the memory of All Russian Saints of the Holy Mountain
More than forty ascetics have entered into the Synaxis of the Russian Saints of the Holy Mountain, glorified at various times by one or another Local Church. Some of them were Serbs, Greeks, and Georgians, although their lives were in one way or another connected with Holy Rus’ or with Russian monasticism on Athos.

President Vladimir Putin met with special honor on Mt. Athos
In response the president of the Russian Federation focused on the tight historical connection of Russia with the Holy Mountain and called pilgrimages to Athos a special blessing.
Comments
×