Overcoming Hate and Division through the Resurrection: Homily for the Sunday of the Samaritan Woman in the Orthodox Church 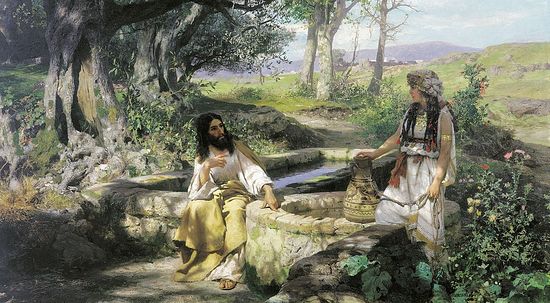 We all have our assumptions about who are our friends and who are our enemies. For all kinds of reasons, we probably feel more comfortable associating with some people as opposed to others. Fortunately for us all, Jesus Christ has overcome such divisions. He died and rose again in order to bring all peoples and nations into the blessed glory of His Kingdom, which is not of this world. And if we associate ourselves with Him, then our lives must bear witness that His resurrection is good news for all.

In order to understand how revolutionary His way of living was in the first century, recall that the Jews despised the Samaritans because they had mixed the ethnic heritage and the religion of Israel with that of other peoples. Jews would have nothing to do with Samaritans, and certainly would not eat or drink anything handled by them. The idea of a good Samaritan was a contradiction in terms. Nonetheless, Christ did the unthinkable by asking a Samaritan woman for a drink of water. Through the unlikely conversation that followed, she came to recognize Him as the Messiah, to believe in Him, and to lead many of her own people to Christ. We remember her in the Orthodox Church as Saint Photini, an evangelist and martyr with the title “Equal to the Apostles.”

In that culture, Jewish men simply did not strike up conversations with women they happened to encounter in public places. Nonetheless, the Lord spoke to Photini with just as much concern and respect as He had shown in an earlier conversation in John’s gospel with Nicodemus, who had misunderstood Him entirely. We cannot overestimate how astounding it would have been in that time and place for a Samaritan woman to respond more faithfully to the Jewish Messiah than had a Pharisee.

To make things even more complicated, this particular Samaritan woman had been married five times and was then living with a man outside of marriage. Both Jews and Samaritans would have considered her to have fallen into an immoral lifestyle of routinely going from one man to another. She may have gone to the well at high noon because she had been rejected by the other women from her village. Though they did not want to treat her as a neighbor, Christ related to her in a different fashion. He knew all about her failings, but did not condemn or ignore her as a result. Perhaps because He treated her in such an unexpected and welcoming way, she was remarkably open to His message.

Indeed, she was transformed by their conversation. Photini showed bravery in telling the men of her village that Jesus Christ is the Messiah. Not only would they have been shocked for a woman, especially one of her reputation, to speak to them about God, they would probably also be astounded to hear that a Jewish rabbi was a Messiah for them as Samaritans. Being inspired by the shocking ways in which Christ had reached out to her, she reached out in surprising ways to her own people. The name Photini means “enlightened one.” This Samaritan woman was enlightened through her unlikely conversation with the Lord and then enlightened others.   Consequently, the Samaritans invited the Jewish Messiah to stay in their village for two days, which also would have been totally unheard of in that time and place.

Our reading from Acts has a similar theme in describing how Gentiles came to believe in the Lord at Antioch, where the disciples were first called Christians. It was no small thing for the originally Jewish Christian community to accept Gentile believers, to be comfortable eating, drinking, and sharing a common life with them. Those viewed as the worst of enemies, as the most depraved human beings, became brothers and sisters. The distinction between Jew and Gentile became irrelevant in Christ in Whom the promises to Abraham are fulfilled and extended to all who have faith in the Savior.

No doubt, different groups of people fear and hate one another because of the power of sin and death in the world as we know it. What group cannot cite some plausible reason that it is justified in getting even with another group?   The same is surely true in our personal relationships. It apparently makes us feel better about our own failings and inadequacies when we build ourselves up even as we put others down. At least we are better than that person or group, we like to think. We like to blame scapegoats for our problems, instead of looking ourselves squarely in the eye. We like to take revenge rather than to forgive. We like to hide our own brokenness and weakness by denigrating anyone who poses a threat to our prideful illusions. Of course, that simply perpetuates a cycle of resentment, as it gives some other group or person an excuse to feel justified in condemning us.

In this glorious season of Pascha, we celebrate that Christ has set us free from slavery to the sin and death that are at the heart of the division and enmity that make people feel completely justified in hating one another. The more that we participate in His great victory, the more our souls will be freed from the compulsive desire to secure our well-being by destroying the character of others. The more we will see that the blessed life of the Kingdom is not a zero-sum game in which we have to beat others in a contest for a scarce resource. Life in a world captive to death is a scarce resource. And if it all ends with the grave, then why not do what it takes to exalt ourselves over the competition for as long as possible? But Christ has truly emptied the tomb and made it possible for Jews, Gentiles, Samaritans, and everyone else—including each of us as the “chief of sinners”– to participate in the life of heaven.

If we are truly to embrace His resurrection, then we must stop distracting ourselves from our own brokenness and pain by demonizing other people, whether individually or collectively. As sinners ourselves whose only hope is in the abundant mercy of Jesus Christ, Who died and rose again for us all, we have no right to exclude anyone from the possibility of embracing the new life of the empty tomb through faith and repentance. If we respond with hatred, condemnation, or stony silence to those we deem unworthy, we turn away from Christ’s ministry of bringing new life to the whole world. We must treat all our neighbors as Christ treated the Samaritan woman. To do anything less is to place our own limits on the great joy of His resurrection. It is to remain in the tomb of sin and death when the Savior invites us to share in the great wedding feast of heaven.

In the remaining days of this glorious season of Pascha, let us keep a close watch on our thoughts, our words, and our actions, and replace fear, revenge, and condemnation with hope, reconciliation, and blessing. Let us refuse to define ourselves over against any group or person, and instead become full participants in the joy of a Kingdom where the divisions that have plagued humanity since the fall of our first parents are healed and overcome. If we will live that way, then we, like St. Photini, will truly become living witnesses that death has died and that light now shines even from the darkest tomb.