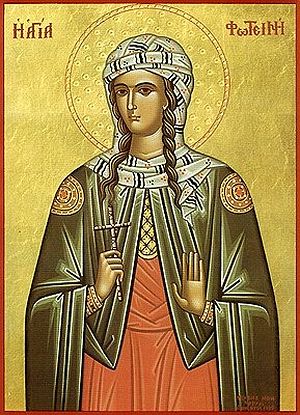 The New Testament describes the familiar account of the "woman at the well" (John 4:5-42), who was a Samaritan. Up to that point she had led a sinful life, one which resulted in a rebuke from Jesus Christ. However, she responded to Christ's stern admonition with genuine repentance, was forgiven her sinful ways, and became a convert to the Christian Faith - taking the name 'Photini' at Baptism, which literally means "the enlightened one".

A significant figure in the Johannine community, the Samaritan Woman, like many other women, contributed to the spread of Christianity. She therefore occupies a place of honour among the apostles. In Greek sermons from the fourth to the fourteenth centuries she is called "apostle" and "evangelist." In these sermons the Samaritan Woman is often compared to the male disciples and apostles and found to surpass them.

Later, Byzantine hagiographers developed the story of the Samaritan Woman, beginning where Saint John left off. At Pentecost Saint Photini received baptism, along with her five sisters, Anatole, Photo, Photis, Paraskeve, Kyriake, and her two sons, Photeinos and Joseph. She then began a missionary career, traveling far and wide, preaching the good news of the Messiah's coming, His death and resurrection. When Nero, the emperor of Rome, began to persecute Christians, Photini and her son Joseph were in Carthage, in Africa, where she was preaching the Christian gospel. After Jesus appeared to Photini in a dream, she sailed to Rome. Her son and many Christians from Africa accompanied her. Photini's arrival and activity aroused curiosity in the capital city. Everyone talked about her, "Who is this woman?" they asked. "She came here with a crowd of followers and she preaches Christ with great boldness."

Soldiers were ordered to bring her to the emperor, but Photini anticipated them. Before they could arrest her, Photini, with her son Joseph and her Christian friends, went to Nero. When the emperor saw them, he asked why they had come. Photini answered, "We have come to teach you to believe in Christ." The half-mad ruler of the Roman Empire did not frighten her. She wanted to convert him! Nero asked the saints their names. Again Photini answered. By name she introduced herself, her five sisters and younger son. The emperor then demanded to know whether they had all agreed to die for the Nazarene. Photini spoke for them. "Yes, for the love of Him we rejoice and in His name we'll gladly die." Hearing their defiant words, Nero ordered their hands beaten with iron rods for three hours. At the end of each hour another persecutor took up the beating. The saints, however, felt no pain. Nothing happened to their hands. Photini joyfully quoted words of a psalm by David: "God is my help. No matter what anyone does to me, I shall not be afraid." Perplexed by the Christian's endurance and confidence, Nero ordered the men thrown into jail. Photini and her five sisters were brought to the golden reception hall in the imperial palace. There, the six women were seated on golden thrones, In front of them stood a large golden table covered with gold coins, jewels and dresses. Nero hoped to tempt the women by this display of wealth and luxury. Nero then ordered his daughter Domnina, with her slave girls, to go speak with the Christian women. Women, he thought, would succeed in persuading their Christian sisters to deny their God.

Domnina greeted Photini graciously, mentioning the name of Christ. On hearing the princess' greeting, the saint thanked God. She then embraced and kissed Domnina. The women talked. But the outcome of the women's talk was not what Nero wished.

Photini catechized Domnina and her hundred slave girls and baptized them all. She gave the name Anthousa to Nero's daughter. After her baptism, Anthousa immediately ordered all the gold and jewels on the golden table distributed to the poor of Rome.

When the emperor heard that his own daughter had been converted to Christianity, he condemned Photini and all her companions to death by fire. For seven days the furnace burned, But when the door of the furnace was opened, it was seen that the fire had not harmed the saints. Next the emperor tried to destroy the saints with poison, Photini offered to be the first to drink it. "O King," she said, "I will drink the poison first so that you might see the power of my Christ and God." All the saints then drank the poison after her. None suffered any ill effects from it. In vain Nero subjected Photini, her sisters, sons and friends to every known torture. The saints survived unscathed to taunt and ridicule their persecutor. For three years they were held in a Roman prison. Saint Photini transformed it into a "house of God." Many Romans came to the prison, were converted and baptized. Finally, the enraged tyrant had all the saints, except for Photini, beheaded. She was thrown first into a deep, dry well and then into prison again. Photini now grieved that she was alone, that she had not received the crown of martyrdom together with her five sisters, Anatole, Photo, Photis, Paraskeve and Kyriake and her two sons, Photeinos and Joseph. Night and day she prayed for release from this life. One night, God appeared to her, made the sign of the cross over her three times. The vision filled her with joy. Many days later, while she hymned and blessed God, Saint Photini gave her soul into God's hands. The Samaritan Woman conversed with Christ by the well of Jacob, near the city of Sychar. She drank of the "living water" and gained everlasting life and glory. For generation after generation, Orthodox Christians have addressed this prayer to the woman exalted by the Messiah when He sat by the well in Samaria and talked with her:

Illuminated by the Holy Spirit, All-Glorious One,
from Christ the Saviour you drank the water of salvation.
With open hand you give it to those who thirst.
Great-Martyr Photini, Equal-to-the-Apostles,
pray to Christ for the salvation of our souls.

Adapted from Saints and Sisterhood: The lives of forty-eight Holy Women
by Eva Catafygiotu Topping
Light and Life Publishing Company On the Sunday of the Samaritan Woman
Archimandrite John (Krestiankin)
This single meeting between Christ and the Samaritan woman turns into a meeting with the living God for both the sinful woman and for the entire world, inasmuch as here, at the well of temporal water, the hitherto unknown source of Eternal Life was first secured. Here Christ for the first time reveals Himself to be the new, inexhaustible well of living water, flowing into Life Eternal. Homily on the Sunday of the Samaritan Woman. On Worshipping God in Spirit and in Truth
St. Ignatius (Brianchaninov)

Homily on the Sunday of the Samaritan Woman. On Worshipping God in Spirit and in Truth
St. Ignatius (Brianchaninov)
Beloved brethren! Today we have heard in the Gospel that the true servants of the true God worship Him in Spirit and in Truth, and that God seeks, that is, He desires to have such worshippers. If God desires to have such worshippers, then it is obvious that he will receive only such worshippers and servants, and they only are pleasing to Him. This teaching was imparted to us by the Son of God Himself.
Comments