Source: The Ukrainian Orthodox Church of the USA 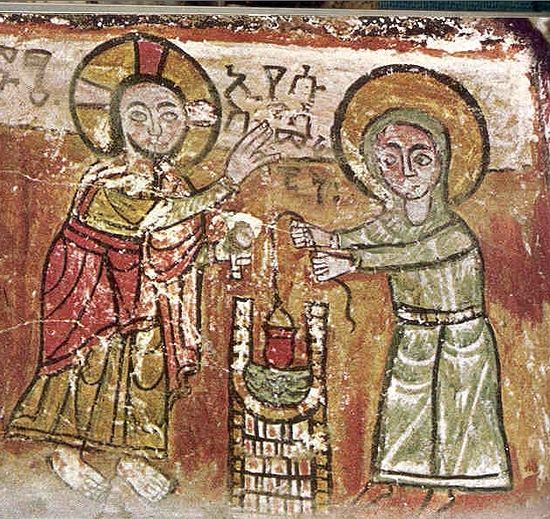 It was the sixth-hour of the day, the hottest part of the day with the sun at its zenith. It was perhaps the worst time of the day to visit Jacob’s well. But water was the life blood of any Samaritan village and the community well had to be visited daily. There would be no avoiding it even though this particular Samaritan woman, whom tradition calls Photini, had little desire to have any kind of chance meetings with fellow Samaritans. Her life, with its multiple marriages and taint of fornication, had made her an outcast among the other good women of this town. In order to avoid the shame and displeasure of being shunned, she came late that day. The resulting meeting with the man who waited at the well, despite the initial social awkwardness of this seemingly chance encounter, would change everything.

Everything about the situation put Photini on guard. Why was this man here? No proper Jewish man would ever be caught hanging out in a place where a Samaritan woman would go, especially one who lived in a public state of sin. What does he want? Was he a fool? Did no rabbi ever tell him not to be in places where scandal might occur or not to eat and drink with non-Jews? Or was he up to no good? Whatever it was, she was not interested and would not waste time making small talk with this man and his vacillation concerning asking her for water and then offering it to her. Mockingly, she brushed him off by pointing out the obvious: “Sir, You have nothing to draw with, and the well is deep. Where then do You get that living water? You are not greater than our father Jacob, who gave us the well, and drank from it himself, as well as his sons and his livestock.”

However, Jesus was not put off. His answer was that the water of which He speaks gives unending life. Against all odds, she did not turn away. She took a chance, stayed, and listened. After all, she was unfulfilled in her life as it was; she was clearly a failure in life and in love. She truly wanted water that gave life. Now the ending of the story is rather unlikely; she did perceive that this was the Christ, overcame her status as a social outcast and proclaimed this Christ boldly to her neighbors.

On the Sunday which this Gospel is proclaimed, I would speculate that most of the hearers will not be like Photini. As such, it is easy to overlook its important implications. There are two fundamental lessons for the average church-goer:

1. All desire to know God

Whether we know it or not, this is a fundamental truth with which we are born. We might not call this desire “God” nor have the proper language for the desire; regardless, everyone seeks a fulfillment that only a deity can provide. Our society, friends, wants, and passions might drive us away from it, but it is always there. Furthermore, when we seek to fulfill this desire with ideas that are untrue, we, like the Samaritans of which Jesus spoke, “worship what” we “do not know.” This can lead to error and ignorance resulting in worshipping a false God or a God who is incorrectly understood. Or it can lead to a cycle of destructive sin. When we attempt to fill our desire for God with a desire for food, drugs, sex, entertainment, or anything that is not of God, we are left empty. Only the true God can satisfy the part of us that needs God. Photini had done just this; she had filled her life with six men, five she married and one she had not. The future was not looking good for Photini.

2. Having the right worship is only a starting point for knowledge of God; it does not guarantee anything.

At the time of this Gospel, the Jews worshipped in ways described in scripture. The rituals and sacrifices were done as prescribed. This did not prevent Jesus from chastising them nor prevent the coming destruction of the temple by the Romans in the year 70 AD. They had fallen into the pattern of empty ritual; they were comfortable in their religion. The Jews had God and needed neither to share Him with their lost brethren the Samaritans nor learn from any lessons of the past. Instead they were bigoted and hateful of the Samaritans; they did not need them or value anything they could have offered to the life of Israel.

It is at this point, we who call ourselves Orthodox, that is, “right-worshippers” might well take care to learn from our Jewish forebearers. Like them, we “worship what we know.” Yes, we know the saving message and proclaim, “God has saved us” and “God is with us.” But we are dwindling in both numbers and fervor. Too often we are shut off from the lost sheep. We are untouched by the constant reminder that God calls us to repent, reform, love, and evangelize. We are satisfied with just maintaining our temples, seminaries, dioceses, ministries, and other institutions. Yet how many of us have a friend, a sister, a brother, a parent, or a child who no longer lives an active Christian life or only attends the divine services twice a year (or maybe less or never)?

Now extend your gaze beyond your closest circle of co-religionists. Do you see the “Samaritan” men and women in your midst? They are everywhere. Some are as close as our own children and siblings. They are the victims of a godless culture that tells them they can do whatever they like. They are not evil people, but they are lost. Our response, too often, is to either shun them or pretend nothing is wrong.

Our current model of spreading the Gospel, which only works in a society where everyone at least acknowledges a basic Christian morality, no longer works. It was built on the presupposition that we all have stable families who will baptize us at forty days, teach us the precepts of the faith, and correct us we when go astray.

We can no longer assume we live in a Judeo-Christian society. We who profess the faith must be fully schooled in the faith, and then seek out those who are lost. We can no longer simply dunk our children in the baptismal font and assume all will be well. It is time to return to the earliest Christian model of spreading the faith. It is time to evangelize the kind of people whom our Lord and the early church sought: Photini the Samaritan Women, Matthew and Zacchaeus the tax-collectors, Mary Magdelene, the pagan Centurion, the lepers ... It was not the priests, Pharisees or the Zealots who spread the faith. It was those who knew they needed salvation: the poor, the wretched, the sinner, and the broken. Our history is full of sinners-turned-saints like St. Moses the black, St. Mary of Egypt, St. Phontini, Blessed Augustine, St. Dismas (the “wise thief”) and many more. If we continue to only maintain the external institution of the Church and leave the message to a small handful of professional clergymen, all we will be left with is empty buildings and a world without true knowledge of God.

For those of us who believe in God, who profess Christ’s divinity, who proclaim His life-giving Spirit, who confess one, holy, catholic and apostolic church, and await bodily resurrection, we must reform ourselves constantly. We must prepare ourselves to be uncomfortable, to be ridiculed, and even persecuted. It also means we will have to live worthy lives, that is, as models of virtue. We will need to stop compromising our own values.

If we do not, expect that our churches will be empty, our children lost, and our world worse off. It is time to open our minds and hearts (and our purses) to bold new ministries and new people.

The Ukrainian Orthodox Church of the USA