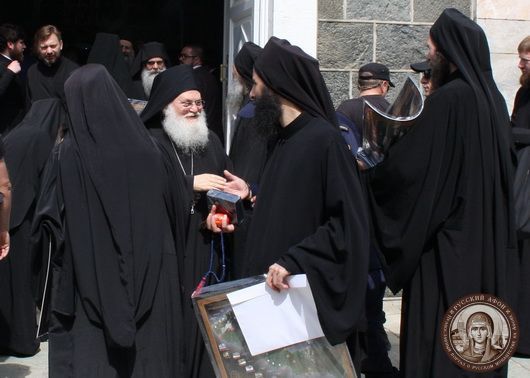 On the occasion of the anniversary celebrations in honor of a thousand years of Russia on Mt. Athos, abbots and representatives of several Athonite monasteries visited St. Panteleimon Monastery, reports a correspondent of “Russian Athos.”

With the blessing of Schema-Archimandrite Jeremiah (Alexin), the abbot of St. Panteleimon Monastery, all were presented with commemorative gifts of the lives of the Russian Athonite saints in Greek.

The participation of the abbots and representatives of the Athonite monasteries in the millennial celebration of Russian monasticism on the Holy Mountain bears witness to the multi-national unity of the Athonite brotherhoods and the prestige of the Russian St. Panteleimon Monastery as an important spiritual center on Mt. Athos. Speeches of President Putin during visit to Mt. Athos

Speeches of President Putin during visit to Mt. Athos
"I am confident that Russia’s ties with Holy Mount Athos and Greece as a whole will continue to strengthen, and spiritual kinship and trust will continue to set the tone of our traditionally close and friendly relations." Patriarch Kirill consecrated the restored cathedral of Old Russikon on Mt. Athos
In honor of the celebration the brothers of St. Panteleimon monastery presented the Patriarch a gift of a picture of Old Russikon by the artist V. Nesterenko. For his part, the primate of the Russian Orthodox Church gave the restored monastery an Iveron Icon of the Mother of God.
Comments
×