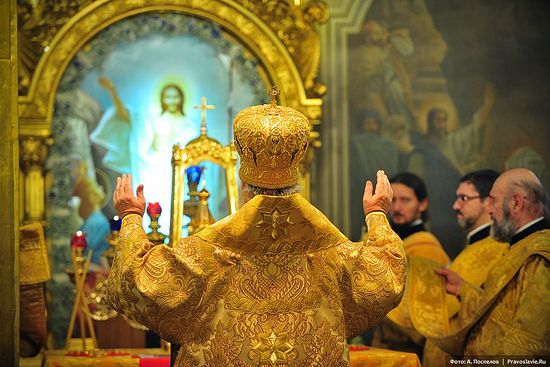 When Ronald Grimes refers to magic, he’s not making “a pejorative” judgment but discussing “rites that aim to effect.” Magic is functional and so refers to any ritual, or “any element of ritual,” that we undertake “as means to an end.” Insofar as a rite not only has meaning but also works, it is magical. Insofar as it is a deed having transcendent reference and accomplishing some desired empirical result, a rite is magical” (Beginnings in Ritual Studies, pp. 42-43).

This kind of analysis is likely to make Christians in liturgical traditions nervous. “After all,” so their thinking might go, “isn’t something accomplished in the Liturgy and the sacraments of the Church?”

Grimes seems to anticipate this objection. He writes:

Liturgy speaks in an interrogative voice, then a declarative one: “Can this be?” then “This is the case.” By contrast, magic depends on the declarative to reach the imperative: “This is how things work; therefore, let this be the case!” Magic has in common with ceremony a propensity for performative utterances, but the frame of reference of the former is political, while that of the latter is transcendent. Magic uses a transcendent frame of reference to effect change in the ordinary reality of social and ecological interaction (p. 43).

The distinction he draws here is subtle.

It might help us if we think of the Church’s liturgical and sacramental tradition as the anthropological fruit of awe. I have in mind here the response of St Elizabeth, the mother of St John the Baptist, to the Virgin Mary. “But why is this granted to me, that the mother of my Lord should come to me?” (Luke 1:43) The questioning inherent in liturgy isn’t skepticism but wonder. Seen in this way, there is a developmental continuity (both psychologically and spiritually) between our appreciation of the beauty of creation, the mystery of the Eucharist and our own dignity as Christians.

The middle step here—the Eucharist—is critical. Without it, our wonder is rooted simply in ourselves and our own finitude in the response to a largely but ultimately equally finite creation. Yes, there is a grandeur to a sunset, a mountain, the birth of a child. But apart from the Eucharist (and the rest of the sacramental economy), these experiences remain locked into the finite and ever-shifting character of creation and of our own experience of creation. Without the Eucharist, I remain a prisoner of my own, internal, psychological processes.

It is the Eucharist, the transformation of bread and wine into the Body and Blood of Christ, that liberates the normal, universal, human experience awe in response to transitory beauty into a foretaste of the Eternal. “Grant them in return for earthly things, heavenly gifts; for temporal, eternal; for corruptible, incorruptible.”

Magic doesn’t begin in the experience of wonder but in an act of the will; not awe but assertion. Yes, magic seeks to change things but change them according to my own desires, my own ideas of what is fitting. “The force of magic,” Grimes writes, “lies in its use of desire as a major contributing factor in causing hoped-for results” (p. 43, emphasis added).

Rooted as they are in awe and wonder, the dominate mood of liturgy is thanksgiving. Yes, liturgy is a transcendent and transforming, event. But the liturgically mediated change is predicated not only on divine grace but my ability to accept with gratitude the fact of my absolute dependence on God and my relative dependence on others. Implicit within the celebration of the Divine Liturgy and the rest of the Church’s sacramental economy, is my grateful acceptance of my own finitude.

The affective mood of magic is quite different. Typically, magic reflects human anxiety and a desire to control reality. Again Grimes: “magic restores, or takes, control by employing symbols more for their consequence than for their meaning. Thus magical anxiety is likely to be coupled with its opposite: confidence. Magic frequently conjures confidence as a step toward producing the desired results” (p. 43).

But the confidence of magic, is not the fruit of trust but fear and so reflects a lack of appreciation for my status as a creature. Yes, as Grimes points out, magic can lead to “awe or thankfulness.” When it does, we are “one step closer to liturgy or celebration.” Usually, though, magic is a way of explaining reality; it “is how we account for causes and consequences.” This search for an explanation often involves “trickery” and again, while this can grow into something else—the “playfulness of celebration” (p. 44)—it doesn’t necessarily do so. For magic to become liturgy requires gratitude; for it to become celebration, it requires that “surrender idiosyncrasies and independence” (p. 41).

In both cases, for magic to become something more requires that I surrender control and the pursuit of my own desires as mine.

Contrary to what we tell ourselves, magic isn’t absent from contemporary societies “although it is probably adumbrated in them.” Specifically, as Grimes says, “modern therapy and sexuality are as laden with magical thinking as healing and fertility rites ever were.” Likewise, “advertising is full of it. People deny that they believe in magic but ingest this pill and use that shampoo, expecting ‘somehow’ (the cue for magical transcendence) to become what they desire” (p. 44).

And the priest? What has this to do with him?

People often come to the Church, come to the worship of the Church, anxious and weary. Jesus tells us as much. “Come to Me, all you who labor and are heavy laden, and I will give you rest. Take My yoke upon you and learn from Me, for I am gentle and lowly in heart, and you will find rest for your souls. For My yoke is easy and My burden is light” (Matthew 11:28-30, NKJV).

In those moments when we come to liturgy anxious, weary and weak, there is a temptation to see the Liturgy and the sacraments as magical and the priest as a magician. The priest needs to be on guard for this attitude among his parishioners. It is important that he be viglant in this matter not only for their sake but his own as well.

The temptation for me as priest is that to see me—and not Christ—as the source of healing and transformation.

Responding to this temptation, and guarding against it, is the subject of our next conversation about Liturgy and the spirituality of the priest. Divine Liturgy and the Great Thanksgiving
Vincent Gabriel
Standing at the south corner of the altar, the deacon quietly utters to the presiding priest: “It is time for the Lord to act.” This phrase sets the tone for everything in our worship. We are not performing some sort of magical act that assuages the deity in our favor, but are rather joining in with the liturgy of eternity; the liturgy of his own actions in our favor; the liturgy which has, and is, and ever shall be taking place; the liturgy which is the great thanksgiving—the great Eucharist—of God.
Comments
×