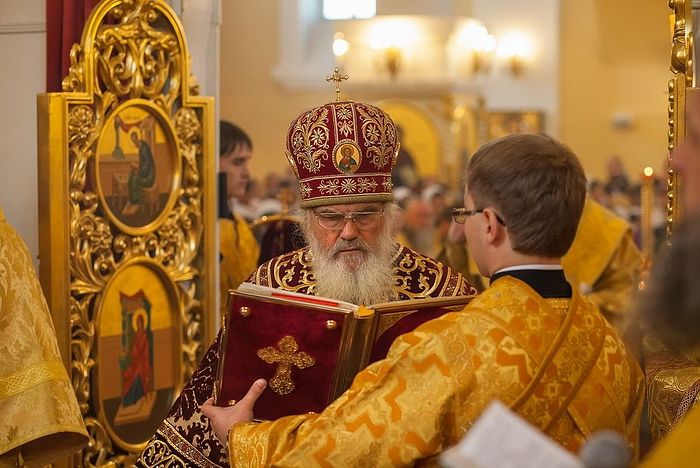 April 19, St. Tikhon’s Orthodox University for the Humanities, with the blessing of His Holiness Patriarch Kirill, hosted the conference: “The Pan-Orthodox Council: Opinions and Expectations.” Taking part in the work of the conference were prominent bishops, clergy, and laity. Among those called to take part in the conference was one of the most authoritative hierarchs of our Church, Metropolitan Benjamin (Pushkar) of Vladivostok and Primorsk, head of the Primorsk Metropolia. However Vladyka was not able to be present in Moscow, but sent his judgment-presentation to the conference concerning those themes which most concerned him. A photocopy of the document was given to each conference participant. As the opinion of Vladyka Benjamin is important for many children of our Church, we offer this document to the reader’s attention, written in the form of an address to the rector of the university, Archpriest Vladimir Vorobyev.

We Must Solve this Problem Without Compromising our Faith

Your Reverence, Archpriest Vladimir, rector of St. Tikhon’s Orthodox University for the Humanities,

Dear hierarchs, clergy, fathers, brothers, and sisters and all participants of the meeting on the question of the forthcoming Pan-Orthodox Council, I deeply bow to you and ask your forgiveness that I was not able to come to Moscow, to St. Tikhon’s University, to discuss with you important issues related to our faith and Church life, which are presented for the decision of the Pan-Orthodox Council.

First of all I would like to give thanks to God, to His Holiness and the Holy Synod for presenting us with the opportunity to gather at this conference, where we can freely express our opinions regarding the impending Pan-Orthodox Council.

I will not undertake to claim what there will be more of for our Church from the upcoming Council: benefit or harm, peace or religious turmoil, love or evil. But if a problem is posed, we must try to solve it with as little harm as possible, and absolutely without any compromising of our faith. I think it will be dangerous for all of Orthodoxy if the Pan-Orthodox Council will approve and endorse participation in the ecumenical movement. By this we would depart from the fullness of the Truth of Christ. And this is why: as soon as we enter into the World Council of Churches, and our Church has already entered, we become its participants and have to accept its statute which states that no one confession participating in the World Council of Churches possesses the fullness of Truth and that the fullness of Truth will come only then when every confession unites as one whole. Such is the nature of the World Council of Churches, and no one has abandoned it yet. And the “Toronto Declaration” does not reject it. Admittedly, it gives the Orthodox Church the freedom to consider itself the One, Holy, and Apostolic Church, but that doesn’t annul the essence of the ecumenical vision. Supposedly you can think about yourself as you want, just participate, and we will confidently and invariably follow their course. Let the dogs bark, but the caravan will follow their path. My brother bishops, consider, have the founders of ecumenism really repented and renounced their satanic vision of creating a united false church in the coming kingdom of the Anti-Christ, or has the World Council of Churches been transformed by the Holy Spirit into a different organization, and maybe something will happen there that us “uninitiated” don’t know about yet?

No, dear brothers, we will not be seduced—it remains in its essence just the same: Satan has not risen up against Satan, he hasn’t been divided there, a diabolical method operates there: one step forward, two steps back, and much else that is hidden from us under the veil of Masonic mystery. But even were the World Council of Churches to sincerely renounce its foundational diabolical idea and invite us Orthodox to become members as we are without changing our faith, what do we need their membership for? We are able to carry Apostolic preaching to the entire world and to Protestants and Catholics without it. This is not pharisaism. But firstly we must turn our people to Christ, spiritually crippled by godless Soviet propaganda. In our time participating in ecumenism we haven’t turned even one Billy Graham to Orthodoxy, but how many of our own have we lost, especially youth?

Therefore, my brother bishops, in order not to deviate from the truth path of Christ, we will entreat His Holiness the Patriarch and the Holy Synod, before the start of the Pan-Orthodox Council, to remove our Church, after the example of the Georgian and Bulgarian Churches, from participation in the ecumenical movement. If we fear, as some say, isolation, then it’s possible to temporarily become observers as does the “church” of Rome. By giving up our membership in the World Council of Churches it will be easier for us to convince other Orthodox Churches at the Pan-Orthodox Council to abandon this, unnecessary for the Orthodox, participation in ecumenism.

That’s about all I wanted to say on the question of the participation of Orthodox Church in the ecumenical movement. My grief here is not only for myself, but for the Russian Orthodox Church, and for all of Orthodoxy. If someone wants to refute my arguments and to doubt my intuition, let him refute and doubt—it’s his right. After all, the Lord gave man free will to make a choice, and I have already done so long ago.

We will be praying to God that He might strengthen the Orthodox Faith in us and in those hierarchs who will be taking part on behalf of the Russian Orthodox Church at the upcoming Pan-Orthodox Council. May God help them all.

Metropolitan of Vladivostok and Primorsk,

Head of the Metropolia of Primorsk Conclusions of the Theological-Academic Conference: The Holy and Great Council: With Great Preparation but Without Expectations

Conclusions of the Theological-Academic Conference: The Holy and Great Council: With Great Preparation but Without Expectations
The theology of our Church is the gift of Divine Revelation, the experience of Pentecost. There is no Church without theology and no theology outside of the Church, theology which was spoken by the Prophets, the Apostles, the Fathers and the Holy Synods. When a Council does not follow Orthodox teaching, it cannot be a true Orthodox Council, acceptable to the Orthodox faithful. This can happen when the participants in the Council do not have the experience of the Holy Fathers or do not, at least, follow them without misinterpreting them.

Patriarchate of Bulgaria: On the Pan-Orthodox Synod and the Appearance of Heresy as a Gift from God so that Orthodoxy can be proclaimed.
Dr. Desislava Panayotova
What helps us correctly confess and live Orthodox ecclesiology: The Orthodox teaching of the Church
Comments