He Blazed a Trail from Earth to Heaven

A Discourse on the Feast of the Ascension of the Lord 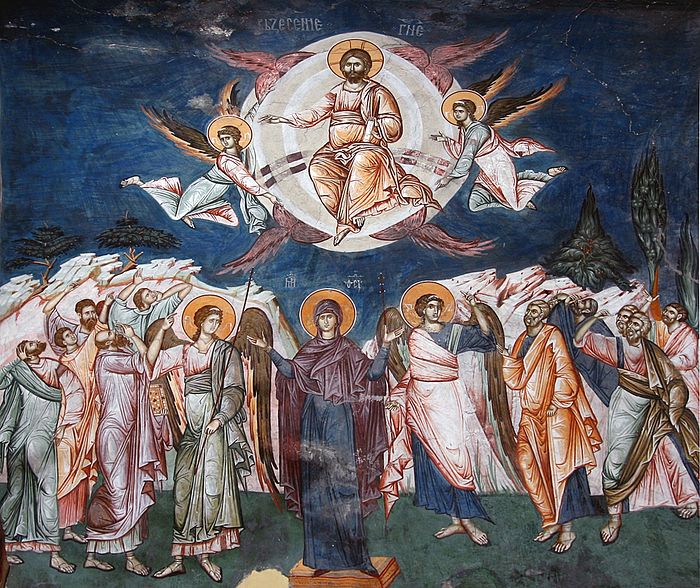 The mysterious, beautiful and great feast of Pascha has drawn to a close—the doors of Heaven have been opened to us, but the divine economy of our salvation has not drawn to its close. The Lord, having conquered death by His Resurrection, ascends from earth to Heaven. He, the God-Man, is now seated at the right hand of the Father, having with Him the same glory and honor belonging to the Son from all eternity. It reveals to us all the beauty and majesty of human nature, in all things like unto us, save sin. From now, as the King of Heaven and earth, stretching forth His hands and blessing with the words: I am with you always, even unto the end of the age both great and small, both the known and unknown world, secret ascetics, His disciples, granting to us the promise and pledge that in a short time the grace of the Holy Spirit will descend from Heaven and overshadow us with His life-giving power.

Have you ever been, friends, to the Holy Land? I visited, quite long ago, the Mt. of Olives, and I recall that very place where is imprinted the footprint of Jesus Christ our Savior. Christians, bowing down, touch this footprint and stand for a long time on that place, where the Apostles beheld the appearance of the luminous cloud. The Savior began to slowly ascend to Heaven, pronouncing the words which I already recalled: I am with you always, even unto the end of the age—words which filled the orphaned hearts of the disciples with joy and celebration. The Ascension of the Lord shows us our own path, because from now on our homeland is not the earth, but Heaven.

And for what did Christ ascend to the Heavenly habitations? In order to prepare a place for us. It will be better for you, the Savior reassured the disciples, that I ascend to the Father, for if I ascend not to there, the Spirit and Comforter will not come to you.

Today, dear friends, let no one be deceived, beholding his transitory and frail body, susceptible to sicknesses and maladies; let no one repeat after the famous Turgenev “Fathers and Sons” character, Evgeny Bazarov, the senseless phrase: “Then I die, and suddenly there’s nothing, and only burdock will grow on my grave.” No, my friends, Christ, having risen from the dead and having seated our nature upon His Throne, bears witness that the soul, which is by nature a foreigner—it is not of the earth, not from below, but from above—will sometime be clothed anew in the body gifted to it. The body, which will be raised from the dust, by the power of God resurrected at the last trump of the captain of the Heavenly hosts, Michael, when, in the words of the Russian poet,

When nature’s final hour strikes
And earthly matter has disintegrated,
All will again be covered by the waters,
With God’s face showing through them.[1] 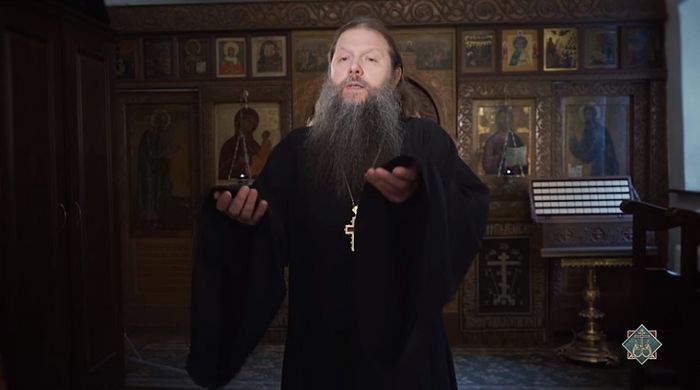 The feast of the Ascension always gathers hundreds in our churches, even thousands of people. On this day they thus want to take part in the Divine Liturgy, and having in advance cleansed their consciences with a rigorous confession, to be communicants of the All-Pure Body and Blood of our Savior Jesus Christ. Because it is not by an external gaze, but by a heartfelt sentiment, by a sixth mystical sense, by our souls that we can grasp and begin to feel that which is not subject to our external feelings, interests, and abilities. The Lord’s Ascension blazes the trail for us from earth to Heaven. “A Christian is born not to crawl, but to fly,” wrote the Apostle Paul in one of his epistles. He joyfully reports to the disciples of the Savior, that they should aim for the heights, like a flock of cranes following after their Leader—the firstborn from the dead, the risen Lord Jesus Christ.

In that day we shall not all die, but we shall all be changed says the Apostle in the Epistle to the Corinthians, of those disciples who will be yet living and caught unawares in the hour, minute and instant, unknown to mankind, of the Second glorious Coming of Christ. At the last trump we will be caught up, enraptured, raised up to the meeting of the Lord in the air between Heaven and earth. Christians will then remind themselves of mountain eagles, unexpectedly acquiring wings—the grace of the Holy Spirit uplifting us; we, as from a cocoon, from the place of our burial will rise not only in soul, but in the body to the Divine Throne, on which sat our Judge and Savior. Jesus Christ will divide the nations, having placed at His right hand His truly repentant disciples, and on the left those who withstood Love and Truth, those who voluntarily crossed over to the side of the devil outcast by God. The Ascension of the Lord compels us to long for that moment about which we sing in the Symbol of Faith: “I look for the resurrection of the dead.”

We note that before Christ the path to Heaven was closed to the soul of man. Even the Old Testament righteous, in all things pleasing to God, like unto Abraham, had no wings with which to ascend to the mansions of light. Yes, we remember the seventh from Adam, Enoch, who was translated and taken to heaven, but it wasn’t the Heavenly Kingdom. Enoch, equally as the Prophet Elijah a zealot, did not see bodily death, but only for a time. In the time of the Antichrist, who will reveal himself by means of Eurovision and other dubious global forums as the president of the United States of the Universe, Elijah and Enoch, two righteous ones of the Old Testament, descending from heaven from those spiritual reservoirs where they dwell together with their bodies, and, denouncing the crimes of the son of perdition, will receive from him a martyr’s death, before they resurrect and together with us all ascend to the Throne of God. 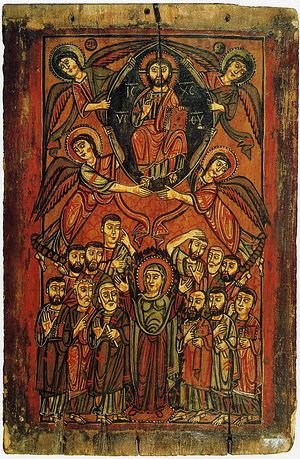 8th-9th century icon, St. Catherine's Monastery, Mt. Sinai
In Rus’ the feast of the Ascension is always served with special solemnity and joy, because the Lord, as you see, has prepared for us mansions in His Kingdom, which is the beauty of the Heavenly Jerusalem to the spiritual gaze of Christians. It’s necessary only to have the eyes to see this city, described in the book of Revelation by the holy Apostle John the Theologian. Its squares and streets are as if from pure gold and translucent glass. In that city there is no night, nothing foul or impure: neither fornicators, nor adulterers, nor those of a filthy tongue, nor thieves, nor the greedy will enter through the gates into that Jerusalem. There there is no church, because its light and church is the Lamb, slain and resurrected. And the feast of Ascension is when we enter into the courts of the Lord, we bow our heads, we cross the Church threshold, and to us is revealed the beauty of this paradisiacal palace, the threshold of which is a simple village church.

Do not forget, dear friends, as per the Divine Liturgy and Communion of the Holy Mysteries of Christ, as was the custom in Rus’ from antiquity, to invite on this festive Thursday, on which always falls the feast of the Ascension, our friends, kind neighbors, and like-minded people to a Russian repast. Generosity and hospitality famed throughout the world is the inner essence of the Russian Orthodox soul which enjoys the truth of Divine grace, and perceiving within itself at least the foundations of humility, meekness, purity and love, it seeks—the rich and the joyous—to share with both the simple and the wise with the joy of the Holy Spirit. But this joy is embodied in a home-cooked family lunch or dinner. This joy is as if materialized in the earthly meal.

Having tasted of good material things, it’s also good on the feast of the Ascension to take comfort in spiritual converse; it’s especially pleasant if batiushka visits to talk with us so that the soul would find wings of hope and that spiritual edification would saturate our hearts. I speak without intimations, but if for someone of you, my dear readers, it hasn’t come to mind who precisely to invite, invite me. Not because I’m hungry or have need of sustenance, but, as said A. de Saint-Exupéry, “The only real luxury is the luxury of human communication.” So, until our next discussion, I await your proposal. On the Feast of the Ascension: A Sermon by Our Righteous Father Sebastian Dabovich San Francisco, 1899
St. Sebastian Dabovich
The "two men in white apparel," who immediately after the ascension of the Lord appeared to the Apostles and asked them why they stood gazing up into heaven, were without doubt themselves inhabitants of heaven; therefore it is not to be supposed that this was displeasing to them, or that they desired to direct the gaze of those men of Galilee elsewhere. No. They desired only to put an end to the inert amazement of the Apostles when saying: Why stand ye gazing up into heaven?
Comments

Isaac6/10/2016 3:40 am
If only we here in America could have such a priest and invite him to our homes. Well, Reverend Father, I will "invite you" into my home this very evening by reading your sermons to my wife and children after dinner.

Somehow if you ever get this message from an unworthy wretch and sinner, please know of how superlatively grateful I am for your preaching of the Word of God in a practical and effective way, and I remain forever indebted to you for such insight and inspiration as you continue to give me. And please pray for me.
×