From the font wholly cleansed

A discourse on the Mystery of Baptism 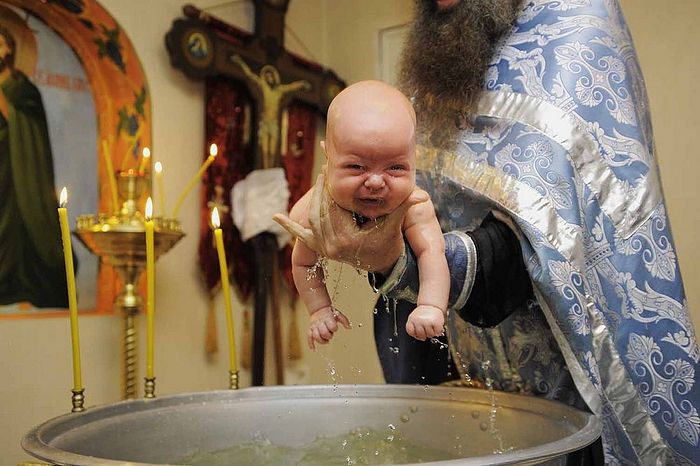 Holy Saturday, the day bridging the Crucifixion and Resurrection of Christ our God, is historically the traditional day for baptisms in the Orthodox Church. The penitential period of Great Lent itself originates as a preparation for catechumens to take on the new life of a Christian.

Archpriest Artemy Vladimirov, spiritual father of the stavropegial Convent of St. Alexis in Moscow, teacher at St. Tikhon’s Orthodox Humanitarian University, and author of several books offered pravoslavie.ru his thoughts on the meaning of the Mystery of Baptism and the prayers accompanying it, and how it ushers a man into the life in Christ.

There are such events and milestones in the earthly life of man that define his future—both in the temporal and eternal perspectives. Baptism, undoubtedly, is just such a turning point in the historical progression of the world.

This discourse is about personal choice, turning your eyes upon God. Baptism is least of all a procedure, an abstract event, but it is genuinely a sacred rite, in which we encounter two components: the free dispensation of man, and the eternal energy of the Godhead—the grace of the Holy Spirit.

It is a Mystery, celebrated over an infant, and over an aged person, beginning with the bestowing of a name in the so-called “Eighth Day Prayer.” On the eighth day, tots were already baptized in ancient times. In this prayer we hear the name of the heavenly patron we have selected. Thus from the very moment of Baptism, Prince Alexander Nevsky, for example, or the Martyr Tatiana, or the Archangel Michael (depending on the sex and chosen name of the baby) becomes the patron of the newly-baptized. In a name, as in a flower bud, much is concealed, although, according to a Russian proverb, a name doesn’t baptize a person, but a person the name. That is, your moral qualities and your choice in favor of goodness determine how far you will conform to the life of your saint and how full-blooded will be his unseen participation in your earthly fate.

After the granting of a name in the ancient Church the bishop would lay his hand upon the baptized adult and read a prayer—a specific prayer, with which begins the period of learning, catechism, and enlightenment for the adult. However, the oration would progress not only and not so much about such exercises in a classroom, as much as about the entrance of yesterday’s heathen into the Christian community. And already living a wholly new life in communion with other people, he sought to renounce pagan customs, battled with his own self, prepared himself for the Mystery of Baptism, invariably underwent the confession-repentance conversation, certainly with the participation of the bishop or pastor, reconsidering all he had lived, and prepared to bring an oath before God—a vow of faith and faithfulness, renouncing the powers of darkness and of the devil, who through thoughts or passions ruled over this man until his Baptism. And there is a special rite of exorcism prayers, or bans, preserved intact and inviolate, namely in the bosom of the Orthodox Church. Nowhere, neither with the Catholics, nor in the Armenian confession, will you find this rite rolled out—a rite that in deep antiquity was even more extensive.

The testimony of the holy fathers was preserved, from which it follows that time and again catechumens heard these prayers, in which the priest yet calls upon the Holy Trinity and beseeches the Lord God to drive out from the bounds of his heart the dark spirits, which, of course, do not leave a Christian in peace after his acceptance of Baptism. However, Baptism fundamentally changes matters, because until our entrance into the Church the evil one acts from within, and the grace of God, not overpowering us, calls us to the light of the Lord. After Baptism the grace of the Holy Spirit, embedded in the heart itself, supports the Christian, and the evil one with his provocations and enticements works from without.

Priests should read these exorcism prayers very attentively, because many have perceived that if a priest dares to overlook something, it effects the life of the baptized person, and quite detrimentally.

The exorcism prayers having been read, the evil spirit unwillingly abandoning his place of habitation, the time of the baptismal vows themselves has arrived, which I would compare with the new recruit’s pledge of allegiance to the Tsar and Fatherland. There is a great difference between a civilian and a military man. Having offered his oath of service to the Fatherland, an officer receives his own personal military arms. In the event of desertion he awaits the military tribunal. And the baptized person is by nature a warrior. “In for a penny, in for a pound”—it’s better not to pronounce these vows than to do so carelessly, without inner understanding of what and to Whom we promise, renouncing the service of pride, evil and lust; espousing ourselves to Christ, in order to serve the King of heaven and earth with faith and righteousness. “Do you believe in Christ?” “I believe in Him as King and God,” answers the adult being baptized, and it seems to me, in this answer is revealed the monarchial consciousness of the Russian people. 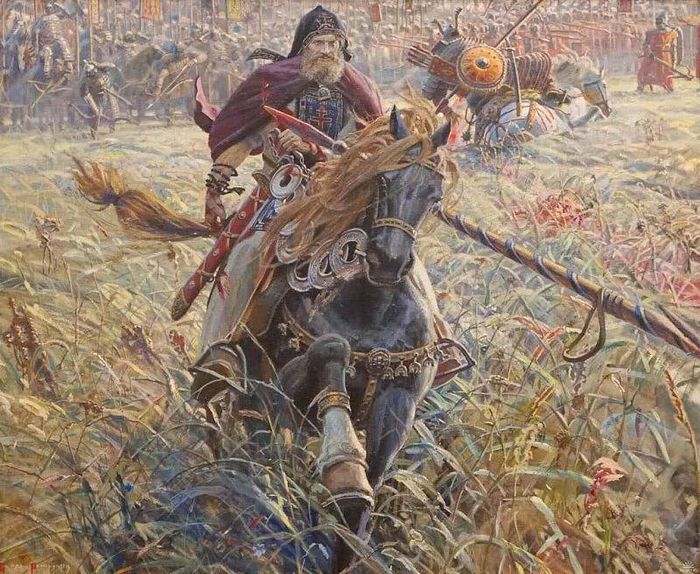 Yes, truly, we have in mind the Tsar—we await the Almighty and All-Merciful God, Whose Kingdom shall have no end. And God grant that all participants in today’s conversation, recalling their baptism, remember that they literally smote the devil, that proud, fallen beast, with a spear of contempt. After all, before uniting with Christ the priest commands the Christian: “Breathe and spit upon the spirit of darkness.” This symbolic action signifies that we receive from the Lord grace-filled power to overcome all the intrigues of the evil spirit. All the forces of the world of darkness are powerless before a Christian who, empowering himself with the Cross and invoking the name of Jesus Christ, is called to dominate over the dark forces.

The priest before the Baptism anoints the baptismal candidate with oil—blessed oil—for the healing of soul and body, already communicating a certain wholeness to our psychosomatic powers. And after this anointing comes the triple immersion. We note: specifically immersion is the correct execution of Baptism. When in the name of the Father and of the Son and of the Holy Spirit we immerse ourselves in holy water as in the Jordan and we exodus from them, then mysteriously wedding ourselves with the death of Christ on the Cross and with His rising from the grave, becoming partakers in the suffering of the Savior—that is, utilizing the fruits of His redemptive death, we emerge from the font of Baptism wholly cleansed from all our voluntary and involuntary sins. Moreover, through Baptism, as you know, we enter into a living union with God, and the consequences of the Adamic disobedience, which called forth a host of diseases of the soul: conceit, pride, resentment, an inclination towards sorrow, despondency, inattentiveness—you name it!—are neutralized by Divine grace. So we emerge thus from the font, as a lily shows forth silvery in spring, as a snow-white turtledove ascends to the heavens from its nest. This is truly the rebirth of the individual Christian to communion with God.

Forthwith after the baptism, the priest anoints again, this time in the distinct Mystery of Chrismation, by means of which the energy of the Holy Spirit takes up its abode naturally in him cleansed by the Mystery of Baptism. The priest anoints the principle sense organs with the words: “The seal of the gift of the Holy Spirit.” And now it’s possible not to fear the seal of the antichrist (about which today our old women discuss much on the benches) if upon our brow there beams the radiant seal of Christ—the Life-giving Cross. Through the anointing of peace, in our hearts begins to shine the Divine flame, the spark of the Holy Spirit, which should transform into a blaze, that is to itself leaven the intellect, and sensory capabilities, and our feelings, emotions, and volitional center, and soul, and body—so that the whole Christian would be truly illuminated by the movement of the Holy Spirit.

After Baptism we are summoned to partake of the Holy Mysteries of Christ. Baptism is recieved in order to conceal Christ Himself in our hearts, and, having turned from idols to the living God, from the power of Satan to the power of truth and Divine love, to live purely, honestly, and nobly, glorifying the Lord Jesus Christ with active compassion, so that our thoughts, words, and deeds would all be directed towards the glorification of the Lord Jesus Christ.

In this way, Baptism is the first impetus, the point of departure, the start, thanks to which we receive moreover the favorable wind of Divine grace. In Baptism the person receives wings of prayer and love for God. However, the Lord God does not save us without us. A man, offering to the Lord a pledge of loyalty and love is already a hundred times more responsible before the Heavenly Father than some kind of Mowgli, who lived in the jungle and knew nothing other than the mystery of communication with monkeys. That is why, dear friends, our program will force many to reevaluate the years of their lives. And if something from today’s chat was unclear for you, go to any church to the priest with these questions in order to, having cleansed the conscience by repentance, acquire the fruits of Baptism, the gifts of the Holy Spirit: peace, joy, love, creative energy in full force—and to be a Christian not in name, but in life. Are John 3 and 6 About Baptism and the Eucharist?
Seraphim Hamilton

Are John 3 and 6 About Baptism and the Eucharist?
Seraphim Hamilton
The Gospel of John is about Jesus as High Priest of a New Temple. The whole book is structured according to the furniture of the tabernacle. We begin at the Courtyard Altar, with Jesus identified as the “Lamb of God” and we end at the Holy of Holies, with Jesus emerging out of a Tomb with two angels on either side of His burial place, just as the two cherubim in the Holy of Holies. Homily on the Theophany
Metropolitan Philaret (Voznesensky)
And what if at the last day of the history of the human race on earth — on the day of the Dread Judgment — it turns out that a man (or his sponsors for him) made vows, and he does not even know what the vows were and what was promised? What will happen to such a man?
Comments
×