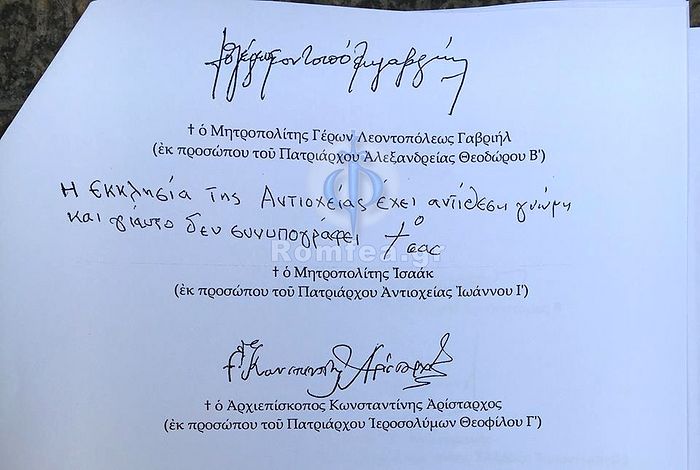 The scanned document reads, in the place left for Antioch's signature: "The Church of Antioch has a contrary opinion and therefore is not signing."

Much noise has been made about the Patriarchate of Antioch's absence from the Great and Holy Council.

This absence has also provoked the absence of the Moscow Patriarchate which insisted that "if even one is absent, then the Great and Holy Council should be postponed."

At the Ecumenical Patriarchate, they are insisting: since all signed for holding the Holy Council, they had to come and now they are exposed.

Characteristically, in a recent interview the representative of the Ecumenical Patriarchate said that all 14 churches had signed!

Had they all actually signed? Romfea.gr reveals: NO, they did not all sign!

From the first moment, the Patriarchate of Antioch had its reservations!

They requested that the council's rules of procedure and the disagreement with the Patriarchate of Jerusalem be resolved first, and then, without differences with the Sister Church of Jerusalem, they could participate in the Council of Crete.

"We never signed that we would take part. We asked that our differences be resolved and the Ecumenical Patriarchate told us that we would start a dialogue after the Great and Holy Council, something to which we could not agree... As you see, there was never consensus, so what unanimity is His All-Holiness talking about?" a representative of the Patriarchate of Antioch told Romfea.gr.

In the photograph published today by Romfea.gr, it is clear: Patriarch John of Antioch, through his representative, did not agree in January in Geneva for his church to participate in the Great Council.

And this absence also brought about the absence of the Russians, as they had warned, with the result that this Great and Holy Council will, unfortunately, have conspicuous absences. Why Antioch did not Sign the Decision to Convoke the Council
Met. Siluan (Muci)

Why Antioch did not Sign the Decision to Convoke the Council
Met. Siluan (Muci)
It is in order to preserve this criterion that was followed from the beginning that the Church of Antioch wanted, on the one hand, to insist on the theme of unanimity in those three points-- the convocation, participation, and making decisions-- and, on the other hand, to be able to include in the council's agenda topics that are important for us in our pastoral practice. For us, this is of paramount importance.

Anthony6/20/2016 4:17 pm
And so the plot thickens! What a pillava. The attendees should have all just stayed at home like the Hierarchs who represent 85% of Orthodox Christians did. Sigh.

Alexandra6/20/2016 3:10 pm
Being that the spiritual children of the Church of Antioch are under the most persecution today (from ISIS), this lack of Christian Orthodox unity only emboldens those who are persecuting them.
As an Orthodox Christian, I am so saddened by all this, and most especially by the absence of the Church of Russia, which Orthodox faithful, Greek and others, have been looking up to with love, respect and admiration up until now.
All this disunity in the world spotlight can only please the evil one and his followers, who today, are many. The haters of the Church, of Christianity and of traditional Christian values, I am sure are delighting at all this news of disunity.
×