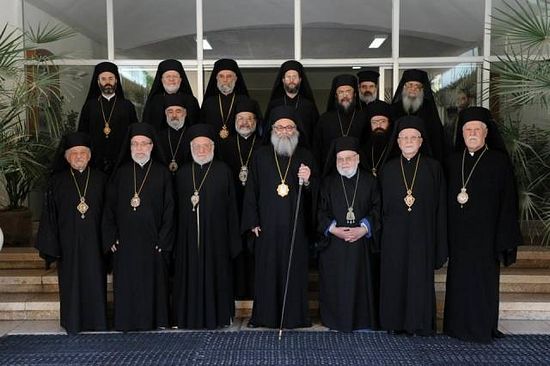 From the secretariart of the Antiochian Patriarchate:

During the course of its seventh exceptional session still open since the 25th of May 2016, the Holy Synod of the Patriarchate of Antioch held a meeting on the 6th of June 2016 presided by His Beatitude Patriarch John X and in the presence of Their Eminencies the Bishops, to study the positions of the Autocephalous Orthodox Churches related to the Holy and Great Pan-Orthodox Council (mentioned hereafter as ”The Great Council”) and the issues listed in its agenda, and in order to formulate the appropriate Antiochian position in this respect, taking into consideration the decision of the Holy Synod of the Ecumenical Patriarchate of May 31, 2016 about “the formation of a committee of representatives of the Churches of Antioch and Jerusalem, with the Ecumenical Patriarchate responsible for its coordination, which would meet immediately after the Great and Holy Synod”, to work on a solution to the violation of the Church of Jerusalem of the canonical jurisdictional boundaries of the Church of Antioch in the Emirate of Qatar.

After considering the positions of the Orthodox Autocephalous Churches, the fathers of the Antiochian Synod realized

1. That the positions of a number of these Churches concerning most of the issues listed on the agenda of the Great Synod are still divergent, and that a number of Churches refuse certain documents as submitted to the Great Council in their actual form, as mentioned in clear and explicit decisions taken by their respective holy synods;

2. That a number of Churches are expressing essential reservations as to the organizational aspects of the Great Council as well as its financial costs, and to the way of applying the agreements reached by the Primates of the Orthodox Churches in Chambésy, 2016;

3. That the Bulgarian Church issued, on the 1st of June 2016, a synodical decision in which it mentioned its reservations and asked His All Holiness the Ecumenical Patriarch to postpone the convening of the Great Council to a later date while actively continuing its preparatory works, otherwise it refrains from taking part in it;

4. That the Church of Russia has taken, on June 3, 2016, a synodical decision suggesting to convene a conference preceding the date of the Holy Council in order to study the unsolved problems and reach a consensus about the remarks of the Churches on the synodical documents. This decision also emphasized the respect of the consensus principle through the participation of all Autocephalous Churches in this Council;

The fathers of the Holy Antiochian Synod also noticed:

1. That the remarks and reservations of the Antiochian Church related to the internal regulations of the Great Council and the decisions taken by the Synaxis of Primates of the Autocephalous Orthodox Churches between January 21 and 28, 2016, which are both documents not signed by the Antiochian Orthodox Church, have not been taken into consideration until now, contrary to the observed rules within the common Orthodox work established by His Holiness Ecumenical Patriarch Athenagoras I when he launched the preparation for the Great Council, and which focuses on the need for unanimous agreement of the Autocephalous Churches on all the decisions;

2. That the document related to the sacrament of marriage and its impediments is still listed on the agenda of the Great Council although it has not been signed by the Church of Antioch and the Church of Georgia;

3. That the issue of diaspora has been included in the agenda of the Great Council without any evaluation of the work of the Episcopal Assemblies, regardless of the repeated Antiochian call for a special meeting to evaluate the activity of these assemblies and suggest the convenient ecclesial solutions before the convention of the Great Council. These assemblies had been created “as a transitory step preparing the ground for a sound canonical solution to the diaspora issue, on condition of being limited to the period of preparation for the Great Council which will find a canonical solution to this matter” (paragraph 1.b. of the text of the decision related to the Orthodox diaspora taken by the fourth Orthodox Pre-conciliar Conference, Chambésy, June 6-12, 2009). Therefore it is necessary to evaluate the work of these assemblies before the convening of the Great Council, so that the Council won’t have to directly address the issue of diaspora and Episcopal Assemblies without pre-conciliar preparation;

4. That the issue of the “Church Calendar and unifying the date of celebrating Pascha” has been removed from the agenda despite its importance to the Orthodox flock of the Antiochian See, awaiting from the universal Orthodox Church a pastoral position in this respect;

5. That the section related to the evaluation of the dialogue with other Christians that was supposed to be drafted sometime soon, before the convening of the Great Council, in order to be included in the document about “Relations of the Orthodox Church with the Rest of the Christian World”, has neither been drafted nor approved until now;

6. That the content of the document “Autonomy and the Means by which it is Proclaimed” needs approved before listing it on the agenda of the Great Council;

7. That the latest pre-conciliar phase was characterized by the absence of real and effective contribution of the Orthodox Churches to the preparatory work, by the secretariat’s slow pace and by the lack of clarity regarding the schedule and proceedings of the sessions; posing a possible risk of failure to the synodical sessions;

8. That the latest decision of the Ecumenical Patriarchate dated May 31, 2016, suggesting to postpone the solution of the dispute with the Patriarchate of Jerusalem until after the Great Council, neglects the initiative of the Ecumenical Patriarch (5 April 2016) and the Antiochian response to it, and disregards the depth of the matter and its effects on the Holy and Great Orthodox Council. The Holy and Great Orthodox Council cannot take place while the communion between two Apostolic churches is broken, given the Eucharistic character of this Council. Issuing this decision before the convening of the Council leaves the Antiochian Church the one and only unacceptable choice of participating in the Great Council without concelebrating at the Eucharist because of not finding a solution to the ongoing violation committed by the Patriarchate of Jerusalem for more than three years (see the statement of the Antiochian Synod of June 1, 2016 regarding this dispute).

And given the fact that the Church of Antioch deployed considerable efforts to preserve Orthodox unity, and this is what it assured and reiterated since the launching of the idea of the Great Council in 1961, and it remained faithful to the path and approach of Patriarchs Elias IV and Ignatius IV of thrice blessed memory, who largely contributed to the progress of the pre-conciliar conferences for the Great Council. The Church of Antioch still endeavors, in the person of her Patriarch John X, to preserve this unity with care, steadfastness and sacrifice;

And knowing that the Antiochian Church, although it didn’t sign the decisions of the Synaxis of the Primates of Autocephalous Orthodox Churches in the Phanar (March 2014), it took part in the preparatory committees of the Great Orthodox Council and in the work of the fifth pre-conciliar conference in Chambésy 2015, and in the Synaxis of the Primates of the Autocephalous Orthodox Churches in Chambésy 2016. And although it didn’t sign any of the latter Synaxis’ decisions, it participated in the work of the preparatory committees of the Great and Holy Orthodox Council, in order to facilitate the joint Orthodox work and accompany it, as it did over the past decades in the hope to solve all problems before the convening of the Great Council;

The Antiochian Church granted this event, which is the greatest and most beautiful in the life of the contemporary Church its deserved place, in making all its draft documents available in Arabic and accessible to its flock. The Antiochian Holy Synod also accompanied the preparatory work for the Council and suggested convenient amendments to its documents.

From the above mentioned, it appears that the convening of the Holy and Great Council, which has been being planned for generations, is jeopardized by a number of difficulties and it still needs more preparation as to the issues it will treat, and the practical details related to its convocation and its proceedings;

The Antiochian Church, in the light of all the difficulties it is facing and which are considered the most dramatic in its history and despite the sorrowful situation of its flock, especially in Syria, Lebanon and Iraq, didn’t spare any effort, time or prayer for the sake of facilitating, and for the success of the endeavors leading to the convention of the Council in these days and to participate in it, in spite of the human and economic crisis it experiences;

If the Council convenes whilst two Apostolic Churches are not in communion with each other, this means that participation in the synodical sessions is possible without taking part in the Holy Eucharist, which deprives the Council of its ecclesiological character and grants it an administrative quality, contradictory to the steadfast Orthodox synodical tradition;

This Council is convening to express Orthodox unity which requires an atmosphere of love and brotherhood in Christ and a much caring for men today which means achieving an agreement of the Autocephalous Orthodox Churches around a large number of subjects and guaranteeing their participation in the proceedings of the Council and unanimously accept its decisions;

Therefore, the fathers of the Holy Antiochian Synod unanimously decided the following:

1. To ask His All-Holiness the Ecumenical Patriarch to work on achieving a consensus about the reservations raised by the Autocephalous Orthodox Churches related to the Holy and Great Council in the time separating us from the date of its convention. In case this fails, the Antiochian Church asks for postponing the convention of the Great Holy Council to another date, when peaceful relations between the Autocephalous Churches prevail, and an Orthodox consensus about the Council’s agenda, regulations and executive and practical procedures are guaranteed;

2. The Antiochian Church will not participate in the Holy and Great Council until the reasons which prevent participation in the Holy Eucharist during the Council disappear. That is, by finding a final solution to the violation of the Patriarchate of Jerusalem of the canonical jurisdictional boundaries of the Antiochian See, which led to the breaking of communion with the Patriarchate of Jerusalem;

3. To re-empahsize the importance of the participation of all Autocephalous Orthodox Churches in the Holy and Great Council and that its decisions should be taken in their presence and approved by them unanimously, according to the essential principle of a Pan-Orthodox Council and to preserve the unity of the Orthodox Church.

4. Communicating with all Orthodox Churches and informing them about the content of the Antiochian position and the necessities that led to it.

5. Asking the believers to participate along with their pastors in prayer that the Holy Spirit might inspires the Church in its journey towards unity, for the sake of its unified witness for Christ in this world. Kyril6/8/2016 7:44 am
Just scrap this whole thing. It's completely unnecessary and will only be used by the enemies of the Church to try and destroy (or at least seriously wound) the Church from within.

Please intervene and aid in resolving these issues in a God pleasing manner so all can come into unity this Pentecost and the peace and work of the Holy Spirit can be a blessing to all.