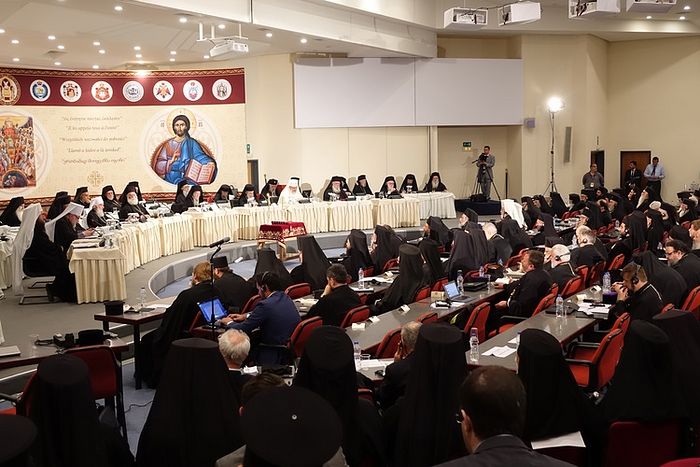 The Primates of the Local Orthodox Churches and their delegations participate in the opening session of the Holy and Great Council of the Orthodox Church at the Orthodox Academy of Crete. PHOTO: © POLISH ORTHODOX CHURCH/JAROSLAW CHARKIEWICZ.

QUESTIONS BY REPORTERS AND ANSWERS BY ARCHBISHOP JOB OF TELMESSOS

A: This is a good question because here we do not understand their absence. Their absence is not linked with the documents we will be addressing at the council. This question has to be addressed to them. But definitely we are sad that they are not here to discuss with us the documents that they have signed. 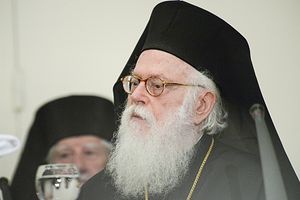 Archbishop Anastasios of Tirana, Durrës and All Albania. PHOTO: © JOHN MINDALA.
Q: In his introductory speech, his Archbishop of Albania made the statement that consensus —about which we are talking a lot recently — is a new way of addressing the questions and the resolutions.

A: This is an issue on which I cannot give you a clear answer.

Q: On Friday, the Russian patriarch described the synaxis as a meeting, not a council. What does this mean for the reception of the council?

A: I am not a spokesperson of the Russian Orthodox Church, so I cannot explain their position. What I can say is that the primates this morning expressed their joy that this event is what we have been waiting for, and we finally we got it in order to discuss the issues that we are concerned with. We are here to discuss among ourselves the problems we have to address. Many of them expressed their hope that this council will be followed not only by the process of its reception by the whole Orthodox world but also will become a new institution that will gather on a regular basis. We have had councils that were not attended by all the Churches. An Ecumenical Council gathered without the presence of the Church of Antioch. Nevertheless, the council was later received as the Third Ecumenical Council. In 1872, a pan-Orthodox council gathered in Constantinople with the absence of the Churches of Russia and Bulgaria at this council. We hope that this Holy and Great Council will initiate a new process of the Orthodox Church. We need it on an internal level and on a worldwide level.

A: As the Ecumenical Patriarch reminded us this morning, all have been participating in the preparation of the Holy and Great Council until the very last moment. And all have sent delegations and booked hotels in Crete. Their decision to be absent was made at the very last moment. After the last Synaxis of the Primates, invitations were sent to the four Churches that have been saying they will not participate. Two of them have answered and those answers were read this morning at the opening session. Two of them have not answered.

Q: Do you have information if the council is going to discuss the Ukraine issue?

A: The Synaxis of Primates which took place in Geneva has appointed the agenda of the council. This is the agenda the council is following. The Ukrainian issue is not on the agenda.

Q: You mentioned four Churches are absent and they represent 170 million followers. Should we continue calling this a pan-Orthodox council or not?

Q: Will the right to speak be simply confined to the primates? Or will the bishops have the possibility of speaking?

A: The regulations of the Holy and Great Council are very clear on that. You can read the regulations 11 and 12 on that issue. All the bishops present as delegates have the right to speak at the council. Since the 14 Churches have to find consensus between them, each Church should express their own consensus and therefore the votes will be made by consensus.

Q: Is it possible to call this a pan-Orthodox synod because it’s giving a message of hope and humanity to the whole world?

A: The aim of this Holy and Great Council is to address the issues that are relevant to the Orthodox Church today. This is why the Churches are gathered The work of the Small Synaxis of the Primates has begun. The Message of the Holy and Great Council will be addressed today
This morning, at 09.00 a.m., the heads of Orthodox Churches arrived at the Monastery of Our Lady of Gonia, in Kolymbari, Crete, where they said a prayer in the opening of the Small Synaxis, the last synaxis of the primates prior to the Holy and Great Council.
Comments

Disciple of Christ6/20/2016 10:47 pm
It is anti-orthodox to call the synod where the majority of the Orthodox Churches and hierarchy are absent, "the great and holy Council".
×