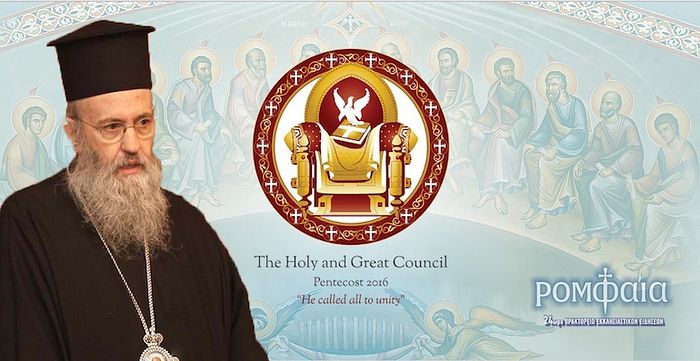 As earlier reported, one well-known contemporary theologian, Met. Hierotheos (Vlachos) of Nafpatkos, was among those participants of the Council on Crete who didn’t sign some of the documents adopted there, raising consistent critiques of their contents and proposing theologically reasoned amendments.

Agionoros.ru published a statement of Met. Hierotheos, shedding light on the events which transpired during the Holy and Great Council on Crete, which originally appeared on the well-known Greek portal Romfea.

Vladyka Hierotheos underlined that it was due to “theological motivations” that he did not sign the text “Relations of the Orthodox Church with the Rest of the Christian World,” but the documents “The Mission of the Orthodox Church in Today’s World” and “The Sacrament of Marriage and its Impediments” were signed by him with reservations.

Vladyka reports that, in his view, all the amendments proposed by the delegation of the Greek Orthodox Church were in actuality rejected.

The document “Relations of the Orthodox Church with the Rest of the Christian World” aroused the concern of Met. Hierotheos from the very beginning, but until the end he hoped it would be corrected thanks to amendments of the Greek and other Local Churches.

However, at the Council the final criterion of truth was Met. John (Zizioulas) of Pergamon: “he either rejected, changed, or accepted the amendments.”

As a result, according to the metropolitan of Nafpatkos, “it turned out to be a crude text,” which until the very last moment (even at the stage of translating into Russian, French and English) was being amended.

Vladyka believes that the text “Relations of the Orthodox Church with the Rest of the Christian World” should have been removed from discussion. He himself did not sign the document because it is in conflict with things he had previously written on the basis of the teachings of the Holy Fathers.

Metropolitan Hierotheos also reports that at the Council the Greek Church’s amendments to the document “Relations of the Orthodox Church with the Rest of the Christian World” were rejected: in the sixth paragraph it was proposed to change “Christian Churches and Confessions” to “Christian confessions and communities.”

On Friday when the document was discussed the deliberations came to a standstill. The Romanian Church withdrew its amendment to the sixth paragraph: “confessions and heterodox communities,” with a choice between the Cypriot Church’s “heterodox Churches” and the Greek Church’s “Christian confessions and communities” remaining.

In the afternoon at an emergency meeting of the Greek Church’s delegation it was decided to defend the position of the Holy Synod of the Greek Church until the end, and a number of alternative version were proposed: “The Orthodox Church is aware of the existence of the heterodox” or “other Christians” or “non-Orthodox Christians.”

As all these options were rejected, the Constantinople Patriarch publicly offered at the evening session to hold a meeting between Met. John of Pergamon and Met. Hierotheos in order to work out a solution.

Met. John met this initiative cooly, while Met. Hierotheos stated that “it’s not a personal problem, but a question for the whole delegation of the Greek Church.”

Then the Ecumenical Patriarch told the Athens Archbishop that it was absolutely necessary to come to some kind of decision.

The delegation of the Greek Church had a meeting on Saturday morning and decided to propose the option: “the Orthodox Church acknowledges the historical name of other heterodox Christian churches and confessions not in communion with it.”

Afterwards Met. Hierotheos stated that he would not sign the text with such a formulation.

He also reports that the hierarchy of the Greek Church was sharply criticized at the Council for its consistent position. Perhaps it was psychological pressure that contributed to the final formulation of the amendment which was approved. “I was personally faced with serious pressure and abusive behavior from the hierarchs. According to my information other members of the Greek Church experienced this pressure too,” says Met. Hierotheos.

He notes that his name appears amongst the signatures on the final edition of the text. Apparently if a primate signed a text then the signatures of his entire delegation were automatically included.

Just before the Holy and Great Council
Met. Hierotheos Vlachos
Many texts have been written recently by experts and non-experts, by those who are competent and those who are not, on this great event. Unfortunately, as I have pointed out in another text, in some of them we see that theology is mixed with politics, or rather, various ecclesiastical elements get involved knowingly or unknowingly in the aspirations of politicians, and politicians, too, use various ecclesiastical elements in order to implement their plans through the Church.

Letter to the Holy Synod of Greece Concerning Preparations for the Upcoming Great and Holy Council
Met. Hierotheos Vlachos
Metropolitan Hierotheos (Vlachos) of Nafpaktou has written the Archbishop of Athens and the Holy Synod of the Church of Greece concerning the process by which the texts for consideration at the Great and Holy Synod (planned for June of 2016) are to be approved.The Metropolitan brings to light serious violations and disregard for the synodical system of the Church with regard to the acceptance of the pre-synodical texts. He requests that answers be given as to why the hierarchy of the Church never discussed, let alone approved, the documents which will be considered at the Holy and Great Council.
Comments

Michael7/4/2016 7:33 pm
The Patriarchate of Constantinople has fallen into apostasy.
×