Union of Orthodox Clergy and Monks of Greece: Crete Council not a real Council 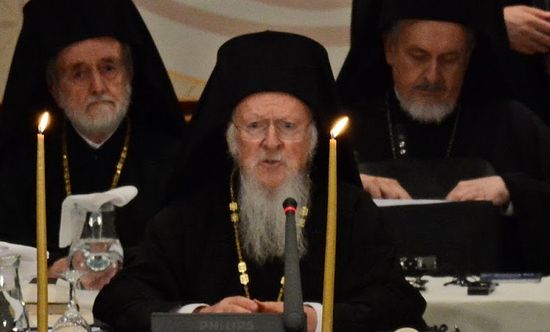 Agionoros.ru has published the main provisions of an open letter signed by the well-known Greek pastors, monastics, and theologians.

The authoritative Greek public organization “Union of Orthodox Clergy and Monks,” has commented on the results of the Crete Council. Agionoros.ru has published the main provisions of an open letter signed by the well-known Greek pastors, monastics, and theologians.

In the letter is noted in particular that the Holy and Great Council which took place on Crete in reality was “neither a council, nor great, nor holy.” It “is not a continuation of the Orthodox Councils, but presents itself as a deviation from the longstanding conciliar practices and as an unprecedented canonical innovation.”

“The Council was not holy, because some of the documents approved by it contradict the decisions of the Holy Apostles and Holy Fathers made in the Holy Spirit, especially in relation to heretics. The Holy Spirit cannot contradict Himself: they condemned heresies and anathematized heretics at the truly holy Councils, but at the Crete “Council” they confessed them as churches… The Crete Council does not fight against heresies, but accords them the status of ecclesiality.”

According to the members of the Union of Orthodox Clergy and Monks, the Council was small and not great, as not all Orthodox bishops took part in it, which means “the fullness of the Church was not represented.” The Crete Council practically turned into a “small meeting of primates.”

The refusal of four Local Churches to participate diminishes the scale of the Council. Thus, the Council forfeited “its pan-Orthodox character,” and moreover “the authority of its decisions was diminished.”

The Union of Orthodox Clergy and Monks have criticized the primate of the Greek Church, Archbishop Ieronymos, who broke their obligations, not defending until the end the amendments proposed by the Holy Synod of the Greek Church (in particular, the proposal to replace “Christian Churches” with “Christian communities” in the text “Relations of the Orthodox Church with the Rest of the Christian World”).

“The Union of Orthodox Clergy and Monks” applauds the bishops who refused to place their signature on some of the Council documents: “They are the disciples of the confessors and Holy Fathers and are the hope for revising the decisions of the Crete Council in the future.”

Amongst those who signed the open letter are Elder Evstratios of the Great Lavra on Mt. Athos, the igumens of several Greek monasteries, and the well-known theologians Fr. George Metallinos, Fr. Theodore Zisis, and Dr. Demetrios Tselengides. Metropolitan Athanasius of Limassol: My conscience would not allow me to sign

Metropolitan Hierotheos of Nafpatkos describes problems with documents adopted on Crete
Vladyka Hierotheos underlined that it was due to “theological motivations” that he did not sign the text “Relations of the Orthodox Church with the Rest of the Christian World,” but the documents “The Mission of the Orthodox Church in Today’s World” and “The Sacrament of Marriage and its Impediments” were signed by him with reservations.
Comments

Pablo Manuel7/4/2016 10:43 pm
It is unbelievable than christians does nothing to unify themselves as our Lord has asked. Instead non christian attitudes has been reigning among some of the bishops, archbishops and Patriarchs. It was a pity that such an event has not the assistance of some important orthodox churches such as Moscow and Georgia.
At time one feel ashamed for beeing named orthodox.

Julia Leontaritis7/4/2016 5:51 pm
We, the lay people of the Holy Orthodox Church, give thanks to God for the wisdom and courage of the those hierarchs who refused to sign these documents despite being intimidated by other members of the church. We are thankful that God gave them the strength to stand strong and fight to uphold the Truths of the Faith--the One, Holy, and Apostolic Church. May God continue to guide them!! They are in our prayers daily.

anthony7/4/2016 10:47 am
And so the fallout continues unabated. Hee hee hee. You have to marvel at the incredible hubris exhibited by the phanar and his menagerie of ecumenists. When has heresy ever succeeded in the Church. Never. So what makes this current crop think that they will somehow succeed where there predecessors failed. May as well drink the cup of repentance and seek forgiveness for their impudence. Orthodox do not want false unions. As St Paisios said in his spriritual counsels on ecumenism - you cannot mix gold with trash.
×