The following article was translated with the blessing of the author, Archimandrite Gregorios (Estephan), Abbot of the Monastery of the Dormition of the Theotokos in Bkeftine, Lebanon. 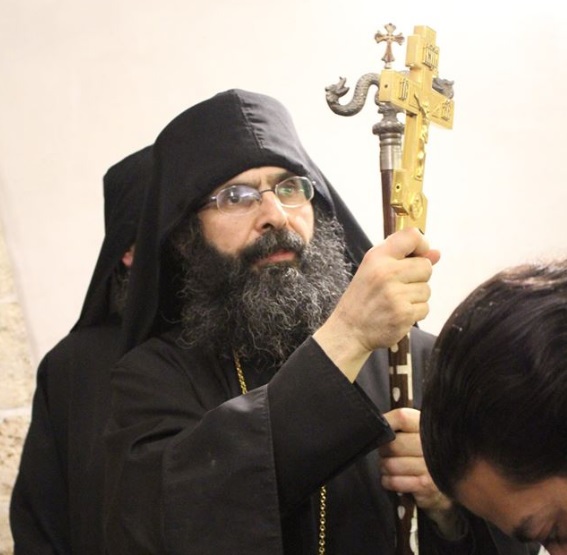 The council was finally held. It should have been an Ecumenical Council for the Orthodox Church, but the shame of confessing Orthodoxy as the One Catholic Church and that it holds the fullness of the Faith pushed them to only give it the epithet “great."

But this great council was held on a small scale, and it would have been better not to hold it, for several reasons. Its unfaithfulness to the spirit and teachings of the Ecumenical Councils that were held throughout the history of the Church was evident when inviting all the Orthodox bishops to the council was refused; and when each of these bishops was not given the right to vote, in a way that endowed a sort of Papism to the Orthodox Patriarchs. But the greatest danger of this council resides in that it is seeking to develop innovative ecclesiological rules disintegrating the unity of the Church that is based on the unity of faith. In Orthodoxy, anyone who opposes the teaching of the One Church and its faith is outside the Church, not a church. According to the new ecclesiology of this council, churches and sacraments outside the Orthodox Church are accepted; this council does not mention those outside the faith and Church as heretics and schismatics; there is only the condoning of “minor dogmas," as they call it. 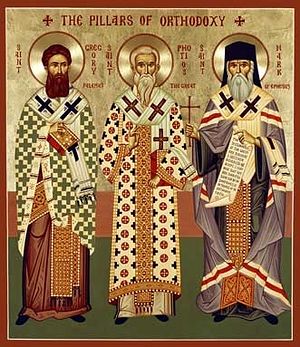 Sts. Gregory Palamas, Photios the Great, and Mark of Ephesus—the Pillars of Orthodoxy
All the previous councils throughout history, that the Church has accepted in its living conscience, both Ecumenical and local, were concerned for preserving the unity of the Church by preserving the unity of the Orthodox faith, pointing out heresies and proving their delusion. The Church Fathers, without any exception, categorically refused to call a church those who are outside the one faith. It is evident that this council discontinues this persistence in preserving the one holy Orthodox faith, which the Church Fathers toiled to preserve, from Saint Ignatios of Antioch, through Ireneus of Lyons, the Capadoccians, Maximos the Confessor, Photios the Great, Gregory Palamas and Mark of Ephesus. It was clear that this council, so-called great, does not seek this continuation in keeping the one holy Orthodox faith, but instead to harmonize with the worldly spirit. This is proved by the refusal to confess the previous councils (879-880 with Saint Photios the Great and the council of 1351 with the great Saint Gregory Palamas), which upheld the stature of Ecumenical Councils in the conscience of Orthodox faithful everywhere.

Several Orthodox Churches did not participate in the council, among them Antioch, but its reasons, in addition to the Qatar issue that should have been solved before holding the council, were not theological nor dogmatic but they were pastoral at most. It is disappointing that for decades until today, the topics of dogma and faith are not discussed by the Holy Antiochian Synod, and this a dangerous matter.

We currently live in an age of secular globalization and corrupt ecumenical dialogues that destroy all the divine precepts that the Lord Jesus Christ has handed down to us. Globalization and its first-born ecumenism marginalize dogma and neutralize in the mind of the Orthodox faithful this holy belief in the one faith that was handed down to them. It is in this manner that the devil confuses truth with delusion i.e. Christ with Belial.

The bishops in Orthodoxy are first and foremost, before any other pastoral interest, the guardians of the holy and Orthodox faith. Their council can only be holy if it knows how to preserve the purity of the Orthodox faith. It was a brave and a blessed avowal expressed by some Orthodox Synods in discussing their decision on whether or not to participate in this council, for instance, the declaration of the Bulgarian Church: “Outside the Holy Orthodox Church there are no other churches, there are only heresies and schism. Calling these churches is an absolute mistake, theologically, dogmatically and canonically”. Statement of the Secretariat of the Holy Synod of Antioch, Balamand, 27 June 2016
The Council of Crete is a Pre-Synodical Conference

Statement of the Secretariat of the Holy Synod of Antioch, Balamand, 27 June 2016
The Council of Crete is a Pre-Synodical Conference
The fathers of the Holy Synod unanimously decided the following to consider the meeting in Crete as a preliminary meeting towards the Pan-Orthodox Council, thus to consider its documents not final, but still open to discussion and amendment upon the convocation of the Great Panorthodox Council in the presence and participation of all the Autocephalous Orthodox Churches. The "Great and Holy" Council: An Analysis, Questions, and Impressions
A Letter to His Beatitude, Our Father Patriarch John X and the Members of the Holy Synod of Antioch regarding the Great Council
Fr. Touma Bitar
The important thing is that no one be alone in himself, like the sailors on Paul's ship, in order to save themselves! In that case, you cannot be saved. Let us hold fast to one another, with you before us! The Spirit of communion teaches you. The Orthodox are crazy, no doubt. For this reason, they are not controlled! This is the mystery of God in them and the mystery of the Opponent's inability to beat them! There is nothing easier for the Enemy than to crush rational people! "You are all fair my love, there is not a spot in you" (Song of Songs 4:7) and this is how your Lord has seen you, O my Church!
Comments

anthony7/4/2016 7:19 pm
If this were to be an Ecumenical Council then it should have been set up as one to condemn the accursed heresy of ecumenism - not try to legitmise it. And those who refused to condemn it be defrocked and laicised with the worst offenders being anathematised.
×